Words are of limited usefulness in evoking music, but we critics aren’t usually lost for them, so it came as a surprise to find, the morning after the Meshk Ensemble’s performance at the Barbican’s Transcender festival, that I couldn’t write about what I’d just heard. As the performance had taken place in crepuscular gloom, I’d dispensed with my notebook and simply let things get to me: with upper torsos serenely immobile, feet doing busy things, and heaven knows what complex muscular linkages going on unseen in between, the five whirling figures had reached their Sufi trance, and taken me with them. The instrumental music came from three ney flutes, a frame drum, and a tanbur lute, while the leader sang with gentle authority, and the solo vocalist with high coloratura; all I could remember afterwards was that the performance came in great waves of emotional energy, punctuated by stretches of intense peace. 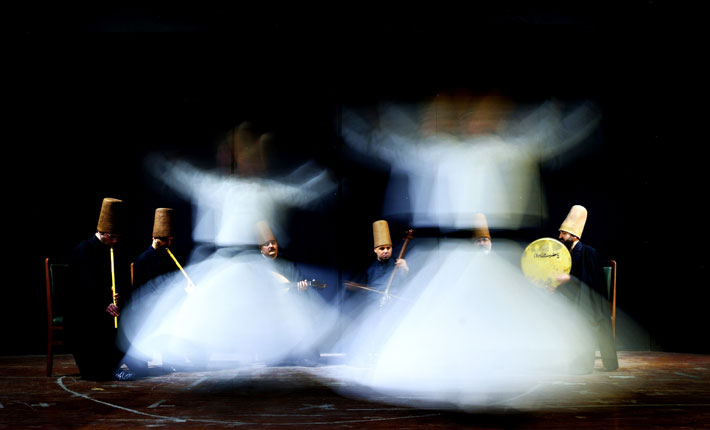 ‘Meshk’ means oral training: this dedicated group of Turkish musicians and dancers earn their bread in a variety of professions, but their vocation is to preserve the 700-year-old rituals of the Mevlevi tradition which Kemal Ataturk all but erased in his Westernising drive in the Twenties. The glowing red carpet on which their dance focused symbolised the presiding inspiration of the poet Rumi; the makam which they performed on this occasion was one they had recently unearthed after it had spent a century lying in a vault; this was their first British appearance, and I hope they come back soon.

The other half of this remarkable concert featured Parissa, the supreme exponent of Persian classical music, who was here giving her first UK performance in nine years. But it’s many more years than that since she last sang in her own country: when Iran’s revolutionary authorities forbade women to sing for mixed audiences, she vowed to abjure the stage until that malign law was rescinded but, 36 years on, it’s still in force. ‘I don’t believe in segregation,’ she told me afterwards. ‘I refuse to collude by singing for female-only audiences. The soul knows no gender.’ Her musical activities in Iran are now limited to teaching students at her house.

She’s now in her mid-sixties, but her vocal charisma is still intact: accompanied on tar lute, kemancheh spike-fiddle, and drum, her performance at the Barbican periodically reached those heights of melismatic ecstasy which Persian-music devotees call haal.