First a welcome to the hall. The old Linbury Theatre was a Spartan concrete cavity, well suited to the hair-shirted avant-garde performances which were often staged there. Now out of its wrappings, the new Linbury is a beautiful oak-panelled space perfectly designed for Baroque opera, indeed for chamber performances of every kind. Musical life in London will be the richer for it.

Secondly, a welcome to the work. Handel’s Berenice, which was a flop in 1737, spent two and a half centuries gathering dust in a library before some students rediscovered it in 1985. Since then it’s seldom been performed, and comes to us now as part of the London Handel Festival in a new English translation by Selma Dimitrijevic, which seeks to render the labyrinthine twists and turns of the plot in a form which will speak to a twenty-first-century audience.

Ask conductor Laurence Cummings what it’s about and he gives a terse answer: ‘Power. And politics. And sexual desire, and its frustration.’ More precisely, it’s about a woman being told that a marriage of convenience has been arranged for her, as a gambit in the ongoing war between ancient Rome and Egypt. And her first aria begins with the word ‘No’ sung four times in a row – the message being that her heart will not be dictated to by politics. In this story the women fight like cats, while their put-upon male partners are frightfully decent types, often self-denyingly so. 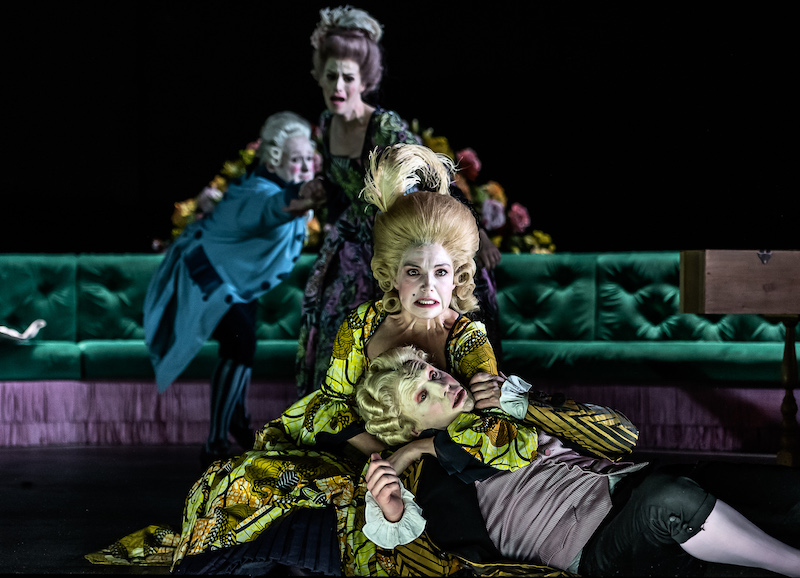 Until recently even Handelians were sniffy about the quality of Berenice, but I challenge anyone to see this show and fail to come out enchanted by the beauty and inventiveness of the score. All the action – in bewigged period costume – takes place on a semi-circular green-baize sofa which spans the stage; Emma Woods’s movement-direction for Adele Thomas’s extravagantly physical production is witty while never upstaging the music; the London Handel Orchestra under Cummings’s direction plays with quintessential Baroque grace and verve. It would have helped if we’d had surtitles – not everyone’s diction was perfect – but the general line was clear enough for the gist to come across.

Sex and violence are constant undertones, surging out in moments of passion: Patrick Terry’s rag-doll Arsace is tossed around the stage as everybody’s fall-guy; Rachel Lloyd and James Laing as the star-crossed Selene and Demetrio all but get their kit off under the influence of passion; Claire Booth’s imperious Berenice shakes her crotch in Demetrio’s startled face, then in sheer frustration beats up everyone in sight.

The marvel is that these fine singer-actors manage all this with spot-on comic timing, and without missing a beat of their coloratura or distorting the arias which come thick and fast as the plot winds to its close. Exquisitely-sung numbers by Booth and Lloyd, accompanied respectively by oboe and flute, are capped by a majestic aria from the American soprano Jacquelin Stucker – taking a role originally written for a high castrato – who gilds the whole evening with her lustrous singing.