Holland Park’s mini-Glyndebourne is now open for business, and in Rodula Gaitanou’s production of Verdi’s Un ballo in maschera it has a winner. The big directorial decisions have been spot-on: the costuming suggests that this tale of adulterous love versus honour, murky spiritualism versus transparent civic duty, takes place in the unstable political atmosphere of the early 1940s, which is fine; the designs by the ever-inventive Takis dovetail so felicitously with the fake-baronial building onto which the stage is tacked that one doesn’t notice the joins. From the moment the lights go up on the male-voice chorus as members of an épée club, one is happy to believe in this fictional world. 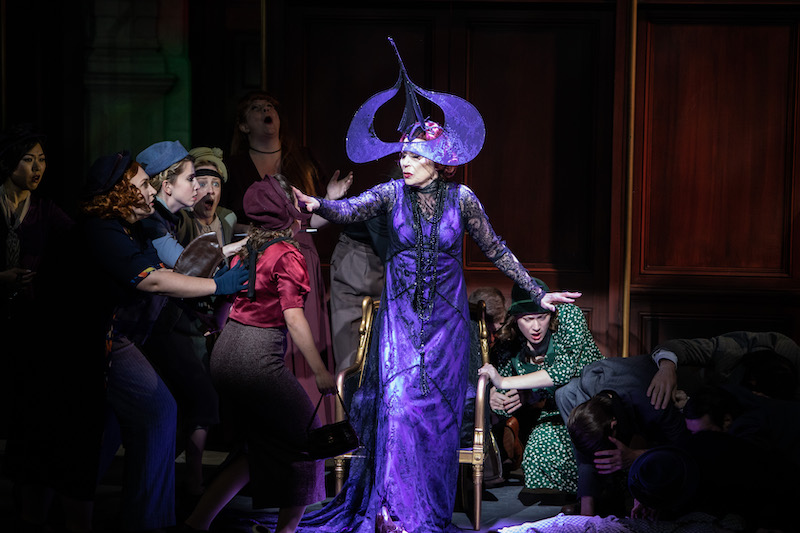 The plot turns on doomed love and a deception: Gustavo is an honourable and much-loved ruler who is hopelessly infatuated with Amelia, the wife of his best friend Anckarström. Gustavo’s visit to fortune-teller Madame Arvidson precipitates a revelation of the truth to the anguished Anckarström, who shoots his ruler at a ball.

The casting is almost ideal. I’m not initially convinced by Rosalind Plowright’s incarnation of the oracle as Cruella de Vil, but it grows on me; George von Bergen’s Anckarström, on the other hand, is a searingly convincing figure, broken and bent on revenge. Matteo Lippi’s Gustavo and Anne Sophie Duprels’s Amelia play off each other perfectly, his graceful tenor complemented by her soaringly beautiful soprano line. Meanwhile Alison Langer, who dances as brilliantly as she sings, makes marvellous work of Gustavo’s factotum Oscar, ensuring that Verdi’s blend of high comedy and grim tragedy is as pungent as it is in Rigoletto. The ball scene with its bloody denouement, powered with tremendous verve by Matthew Kofi Waldron in the pit, is a triumphant meld of lighting, design, and choreography, with Gaitanou’s direction never putting a foot wrong. ★★★★★

Alas, one can’t say the same of Karolina Sofulak’s production of Puccini’s Manon Lescaut, which is Opera Holland Park’s other new production. Paul Carey Jones’s Lescaut and Stephen Richardson’s Geronte are effectively sung and acted, while Elizabeth Llewellyn’s Manon has a fragile vocal grace which is nicely complemented by Peter Auty’s ringingly tragic Des Grieux. Under Peter Robinson’s direction, the City of London Sinfonia gives as eloquent account of the score as could be desired.

But the designs by George Johnson-Leigh have a terrible amateurishness which gets worse as the evening progresses, to a point where the supposed desert in which Manon expires simply recycles the street which has already done inadequate service as the supposed port in which Manon and her fellow-victims have been paraded. Geronte’s supposedly luxurious apartment is a Spartan bivouac, while the frock poor Llewellyn is condemned to wear in Act Two is, to put it camply, a fright.

There are many ways in which designers can transcend the limitations of a cash-strapped budget, but Johnson-Leigh doesn’t seem to have looked for one. And the direction itself is consistently leaden, sometimes incomprehensible, and finally perverse. In a prefatory interview Sofulak says she hopes we can ‘focus on this [work’s] meditation on female empowerment and the dangers of commodification’. Er, possibly. But for those who keep their eyes closed, this show can still offer a stirringly Puccinian experience. ★★