The Other Classical Musics

I hope this exceptional book will be much read by musicians and music lovers.
It will help us appreciate the infinite cultural diversity we face, and it invites us to reflect ever more deeply on the complex nature of musical identity in our changing world.
- Pierre-Laurent Aimard

What is classical music? This book answers the question in a manner never before attempted, by presenting the history of fifteen parallel traditions, of which Western classical music is just one. 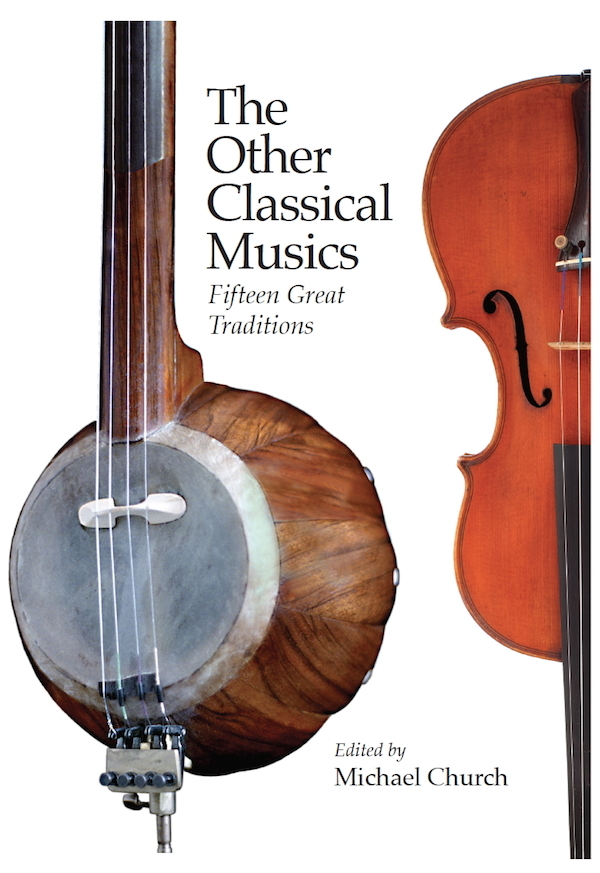 Each music is analysed in terms of its modes, scales, and theory; its instruments, forms, and aesthetic goals; its historical development, golden age, and condition today; and the conventions governing its performance. The writers are leading ethnomusicologists, and their approach is based on the belief that music is best understood in the context of the culture which gave rise to it.

"Whether discussing gamelan or gagaku, these fifteen essays, gorgeously illustrated, never forget that they are telling human stories, rooting unfamiliar sounds, words and ideas in narratives in which we can all find a foothold… Michael Church and his authors start from the premise that all musicology is ethnomusicology; the western tradition of Bach and Mozart is as much an anthropological curiosity as African drumming or Indian ragas and must be explored within the same historical and cultural context…
The Other Classical Musics returns western classical music to its proper place, somewhere in the back row of the polyphonous Babel of global traditions."
Alexandra Coghlan, The Spectator

"Church has orchestrated a truly invaluable volume… Anyone willing to open mind and ears to ‘humanity’s most sophisticated communal achievements in musical creation’ will find a sumptuous treasure-house in this encyclopaedic survey. Not even the most eclectic music-lover will come away from this book without having their curiosity piqued and their ears tantalised."
Boyd Tonkin, The Independent

"Beautifully produced, this fascinating study… provides a window into the living, breathing soul of music-making in all its glorious, messy specificity."
Kate Wakeling, BBC Music Magazine

"A really fine and useful collection of essays… this excellent work brings to mind some issues with which ethnomusicologists have long been concerned. One of [its] great assets [lies in its] photographs of sources, relevant art works, musicians and performances and instruments."
Bruno Nettl, Journal of Folklore Research

"A sackful of riches... What this book can do is offer a deeper, richer understanding of the nature of music itself, and of its significance to human beings the world over. It could be transformative."
Jessica Duchen, JDCMB

"From Turkish makam to Javanese gamelan and the Mande music of West Africa, the musical world embraces a wealth of classical traditions. This compendium seeks to open doors to the riches of 15 of the most substantial in a lively but comprehensible style."
Richard Fairman, Best Books of 2015, Financial Times

Selected as a ‘Notable Music Book of 2015’ by
Alex Ross, New Yorker

By including Mande and Uzbek-Tajik music – plus North American jazz – in addition to the better-known styles of the Middle East, the Indian sub-continent, the Far East, and South-East Asia, this book offers challenging new perspectives on the word ‘classical’. It shows the extent to which most classical traditions are underpinned by improvisation, and reveals the cognate origins of seemingly unrelated musics; it reflects the multifarious ways in which colonialism, migration, and new technology have affected musical development, and continue to do so today.

"The Other Classical Musics is a valuable, accessible, and highly recommended book. Attractively illustrated, it constitutes a manageable and useful compendium suitable for a variety of reference and educational purposes, while providing an intriguing outline for meaningful conceptual change. Michael Church understands the realities of our contemporary musical world as well as its roots, and one hopes for more of his bold leadership in cogently synthesising the aims of comparative musicology."
Mark Hijleh, Analytical Approaches to World Music, 2016

"Fascinating… This book is vitally important in broadening our understanding of the term ‘classical music’."
Ken Walton, The Scotsman

"Michael Church has spotted an important gap in the market… [It is] sure to be a classic text… should be required reading in academia, and for anyone else with a serious interest."
Simon Broughton, Songlines

"A great book, beautifully illustrated… Given the current political climate, with everybody being so suspicious of the ‘other’, it shows the level of sophistication in so many other cultures. That’s where this book really hits home."
Jane Cornwell, Music Matters, BBC Radio 3

"There is a treasure trove of under-appreciated music out there; this book will convince many to explore it. And in fewer than thirty pages it offers as good a summary of the Western canon as can be found anywhere."
The Economist

"Native musical traditions have their own fascinating history: these clearly-written and concise essays are perfect to dip into, and are accompanied by striking illustrations."
Prospect

"The writers are distinguished academics and journalists and the chapters are clear, enlightening, and enjoyable."
Keith Howard, The Times Literary Supplement

With specialist language kept to a minimum, it’s designed to help both students and general readers to appreciate musical traditions which may be unfamiliar to them, and to encounter the reality which lies behind that lazy adjective ‘exotic’.

This beautifully-written book offers unique insights into a variety of musical cultures. I found it fascinating, both about my own culture and about others I am less familiar with.
- Anoushka Shankar

The Other Classical Musics was published in October 2015.

Consult the publisher's website or read more from Michael Church
about the world's musical traditions:
The unrest is silence: why ‘classical’ music traditions are under threat

On March 10, 2016, the Wigmore Hall launched a new concert strand co-produced by the Aga Khan Music Initiative. Also entitled The Other Classical Musics, this series began with a recital of Afghan classical music and featured music from Tajikistan, Azerbaijan, Syria, China and the Muslim world. Review