Given its accessibility and musical magnificence, it seems extraordinary that Enescu’s Oedipe – premiered in Paris in 1936 – should have had to wait until now for its British premiere. But the La Fura dels Baus production, which opened in Brussels in 2011, imbues it with such urgent contemporaneousness that the wait feels worth it. This still-underrated Romanian composer transmutes influences from Debussy, Berg, Stravinsky, and Bartok into a meld which even now feels fresh and new; the staging shows what magic can be achieved when a production team with their own highly-developed aesthetic are given their head by the host-organisation.

We saw a fine example of that in 2013, when Simon McBurney and Complicité were drafted in by ENO to do their thing with The Magic Flute: with chalk-drawn (in real-time) imagery morphing into 3D reality on several levels at once, we might have been watching a work being created on the spot. Oedipe has two directors – Alex Ollé and Valentina Carrasco – plus a design team led by Alfons Flores, Lluc Castells, and Peter van Praet; the impetus for this show emanates from the Barcelona-based theatre company La Fura dels Baus. 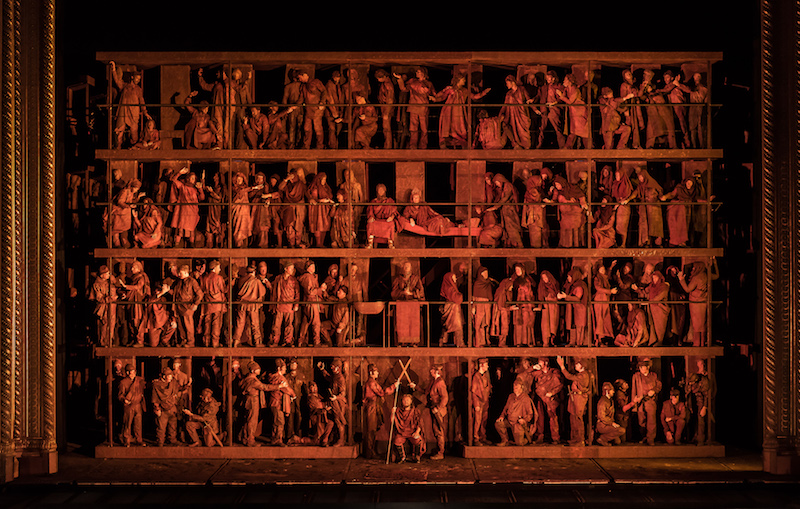 We are initially confronted by what looks like a front-curtain suggesting a smudgily-painted cathedral reredos filled with figures in hieratic poses. A gauze screen is gently pulled away, revealing these figures to be three-dimensional. Then – and the effect feels almost miraculous – they begin to move: a whole city, going about its business. Some are working, some hold forth, some are quarrelling, one has just given birth; most are in timeless peasant garb, some are in military uniform; it all has a Balkan look. With a unanimous flourish, a row of soldiers unsheathe their swords, and the city begins to sing. Reflecting a sudden chill in the score, the lighting turns bleached and sepulchral, and an ageless, sightless figure thunders out a prophecy – Tiresias with his fateful message about what Oedipus will be driven by fate to do. The first act’s drama is bodied forth in the transmutations of this animated human frieze.

The crossroads of the classical story becomes a motorway on which day-glo figures, surrounded by traffic cones, are spreading tar in nocturnal rain and fog. Caught in the headlights of a lorry, three figures approach; there is a fight, and all are killed. The scene closes with a blood-spattered curtain falling, as in an abattoir. Then, behind this curtain, a life-sized aeroplane descends, silent, sinister, and predatory: this contains the Sphinx whose subsequent killing has visceral power, with an angry crowd dismembering the plane like children pulling the wings off a giant fly. 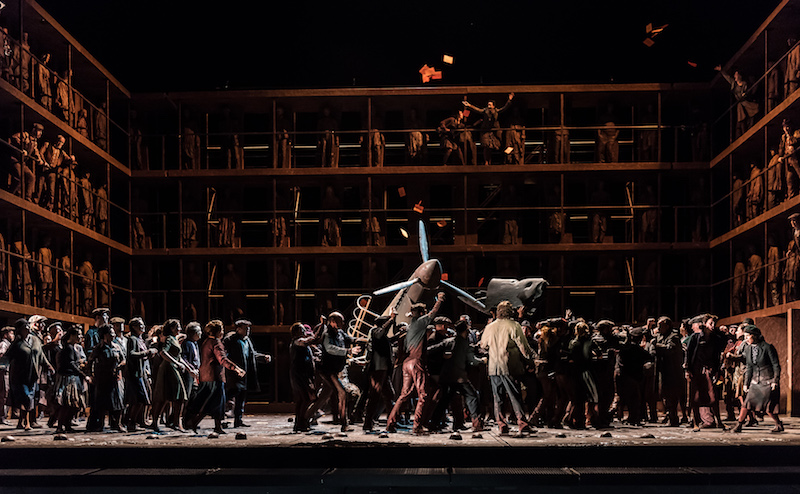 In the fourth act all the visual presentation of the drama is accentuated by contrasts in lighting – a mysterious muted glow for the sacred grove, dusty terracotta for the Athenians, shining white for Theseus and his people of the future. And the music’s increasingly ecstatic momentum finds its complement in a breath-taking final sequence, as Oedipus, purified by suffering, and led by a slender column of water-vapour hanging in the air, strides off into a dazzlingly bright hereafter, leaving the figures on the original reredos dimly-lit like mummified corpses in a cemetery. 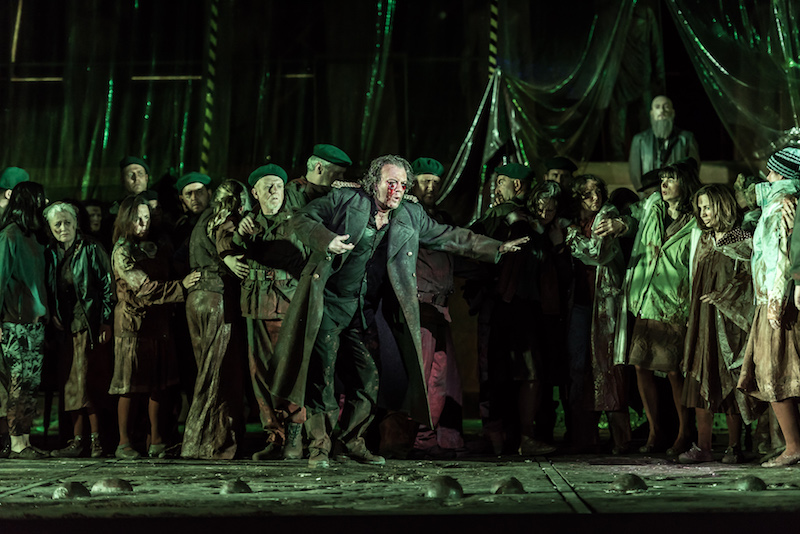 But there’s nothing gratuitous or look-at-me about these designs, which grow organically out of the story: this is a world whose bold modern touches cohere beautifully – even Oedipus on a Freudian couch, confessing his disturbing fantasies to his white-coated foster-mother. Johan Reuter’s performance in the title role carries heroic conviction, while the direction ensures that every twist in Enescu’s score – conducted with authority by Leo Hussain – is faithfully reflected in what we see. When it comes out, the DVD of this brilliant production will be worth studying bar by bar, to see how Ollé, Carrasco, and their team have achieved this inspired marriage of sound and vision.