“WE LEFT our native land thinking we carried no baggage, completely unaware of the biggest gift our country had bestowed on us: the gift of music.” So said Basel Rajoub, a Syrian composer and saxophone-player, when he and his ensemble, Soriana, launched their first CD in exile in 2013. A graceful meld of jazz and Middle-Eastern improvisation, it was posted online so that fans could stream it free of charge. A neater expression of the truth that music lies at the heart of the Syrian psyche would be hard to find.

Six years after pro-democracy demonstrations plunged Syria into civil war, many of its musicians have fled abroad where they are propagating their musical culture. The annual Morgenland festival in Osnabrück, north-west Germany, in which European and Middle-Eastern musicians collaborate, has long been powered by Syrian stars such as the clarinettist Kinan Azmeh, the ney flautist Moslem Rahal, and the mesmerizing singer Ibrahim Keivo. On March 16th, under the leadership of Michael Dreyer, the founder-director of Morgenland, they unveiled a three-day festival of Syrian music in all its forms at the new Elbphilharmonie Hall in Hamburg. This is a project of which Christoph Lieben-Seutter, general director of the Elbphilharmonie, is particularly proud: Hamburg now has a large population of migrants from the Middle East, and he’s determined his hall shall play its part in making them feel welcome.

The festival, entitled “Salaam Syria” (“Greetings, Syria”), has been a bold experiment in cross-cultural collaboration. A part-German, part-Syrian choir specially created for the event sang in the Arabic folk style: in unison, rather than in Western harmony, and with plenty of call-and-response. The NDR Bigband, a famous brass ensemble, shared the stage for a jazz-fest with the Syrian Bigband, which combines Western brass with the oud, ney flute, and qanun zither. Meanwhile fusions of Western jazz and Middle-Eastern folk music have united top instrumentalists like the French tuba-player Michel Godard, and Djivan Gasparian, maestro on the duduk oboe whose mournfully beautiful sound is heard in many Mediterranean lands. But the Trump travel ban also had its effect: one concert had to be cancelled because its Syrian musicians, who were currently based in the US, did not dare leave that country, for fear of not being allowed back in. 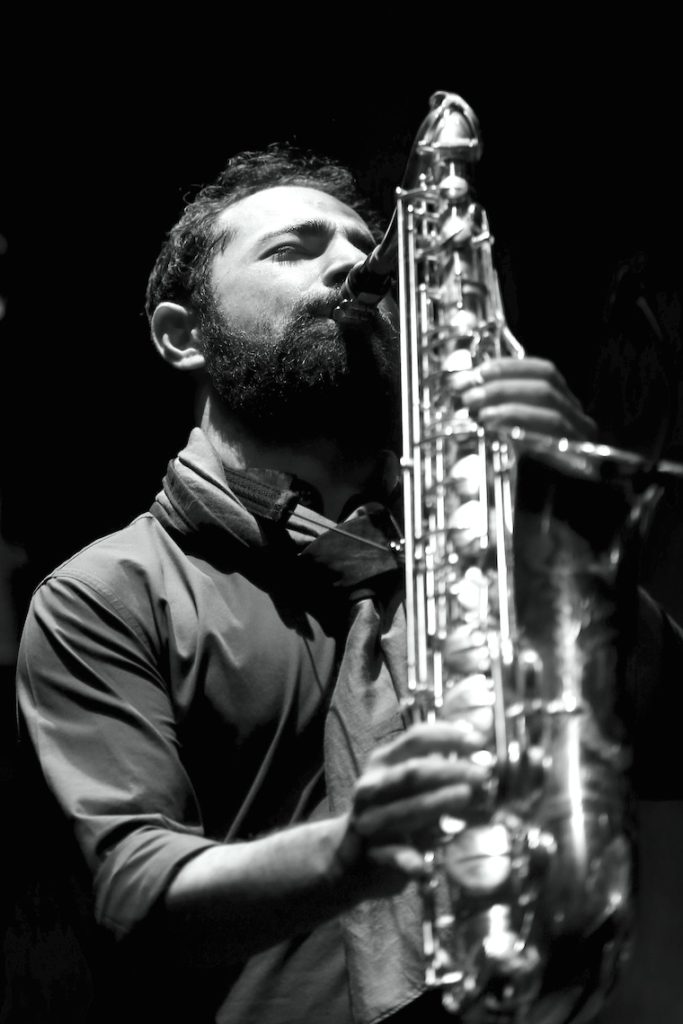 The festival’s final concert, “Syria Welcomes the World”, included the celebrated Lamento by Ibrahim Keivo, in his own unique variant on the musical style which links Syria with the rest of the Middle East: maqam. Maqam is microtonal music, which allows the pitch to slide between the Western intervals in a way which tugs the heart, and, since it’s all improvised, it lends itself readily to surges of emotion. But what makes Keivo’s music captivating is his personal hinterland. Descended from an Armenian family who narrowly escaped the Turkish genocide in 1915, he grew up in a part of Northern Syria where many cultures mingled; he trained in Aleppo, and only left Syria in 2014 because ISIS were within a few miles of his village, and his eighteen-year-old daughter would have been in danger. Self-accompanied on the lute, his singing pours out with ecstatic power in a mixture of Arabic, Kurdish, and Armenian: no wonder the victims of today’s persecutions are drawn to it.

The other high point of this concert came when the Syrian composer-soprano Dima Orsho was joined by the golden-toned German countertenor Kai Wessel, for a performance of her deeply moving symphonic poem ‘For Those Forgotten on the Banks of the Euphrates’, accompanied by musicians from Hamburg plus players from the Syrian Expat Philharmonic Orchestra. Created in Germany in 2015, but drawing players from the Syrian diaspora throughout Europe, this ‘expat’ orchestra is further evidence of Syrian musicians’ adaptability, as is the charming CD recently released by the Belgian Muziekpublique label, Refugees for Refugees. On this CD, virtuoso musicians in flight from countries across the Middle East and Central Asia are represented in a compilation where the nationalities are jumbled up, but what is notable is that half of these musicians hail from Syria.

Meanwhile a Syrian expat ensemble has been formed in London, under the direction of the composer and Oriental flute maestro Louai Alhenawi. As a prominent demonstrator at the start of the Syrian revolution, Alhenawi had to leave his land in a hurry, but in his adoptive home, London, he’s now an equally prominent champion of Syrian music. Conservatoire-trained on the Western flute as well as on its Oriental equivalent, the ney, he is making a point of marrying the two traditions. He’s co-founded Tafahum, an East-West fusion ensemble, and has premiered a concerto for ney and symphony orchestra. His dazzling party piece – now imitated by other ney virtuosi – is to play Rimsky-Korsakov’s tongue-twister for flute, The Flight of the Bumble Bee, on the valveless, and therefore much more difficult, ney. The bonus is that the flute’s icy purity is replaced by the ney’s rich timbre.

Syrian instrumentalists in the Western classical tradition have one obvious escape route – they can pick up orchestral jobs anywhere in the Western world. And soloists like the young pianist Riyad Nicolas can give recitals: this charismatic player, in more peaceful times his country’s prime classical-music export, now specializes in music by Syrian composers, and is currently performing on behalf of refugee charities in America. Yet despite all the odds, Western classical music lives on in Syria. Until 2012, Damascus was the most liberally multi-cultural city in the Middle East, offering concerts and operas of a very high standard. The Syrian National Symphony Orchestra has inevitably lost many of its players, but under its conductor Missak Baghboudarian it still flies the flag. Last month he presided over a week-long organ festival in Damascus, followed by a choral festival of Western music to which choirs came from five Syrian cities.

But underlying Syria’s growing contribution to musical life beyond its borders, there is a deeper and rather fascinating possibility. Avant-garde European composers doggedly claim that the Western classical tradition still has vitality, but it’s now widely accepted that, after the musical revolutions triggered by Arnold Schoenberg, John Cage, and Pierre Boulez, that tradition has lost its way.

Might the microtonal, improvisatory sound-world of maqam provide a new way forward for the West’s exhausted classicism? A growing number of European composers and musicians already think so, and are incorporating its principles into their work. This could be Syria’s greatest musical gift.