The elfin Yuja Wang has now reached thirty, so must be judged by grown-up standards. A shame that she ducked out of the ‘Hammerklavier’ Sonata originally billed for this RFH recital – there is no greater challenge – but the programme she chose, starting with Chopin’s Preludes, was challenge enough. The first emerged as a sonorous murmur, the second was lyrical and sorrowing, the third had bright clarity, the fourth an honest plainness, and the fifth was a muted whirligig.

Her touch had a silky smoothness, and each piece was exquisitely shaped. Some came like miniature dramas – most beautifully in the case of the ‘Raindrop’ and the suavely tranquil No 17, where her pianissimo evocation of a distant bell plus chanting choir offered a moment of ravishment.

Where Chopin called for virtuosity, she reminded us that no other pianist can marshal huge fistfuls of notes at hurtling speed with such insouciant confidence, but Chopin also calls for blood, on this occasion not a drop was spilt. Segueing from perfect piece to perfect piece, she seemed completely untouched by their emotions: like Prospero’s tempest, each storm here vanished leaving no trace on the still surface of the water. This show was smoke and mirrors, not flesh and blood. 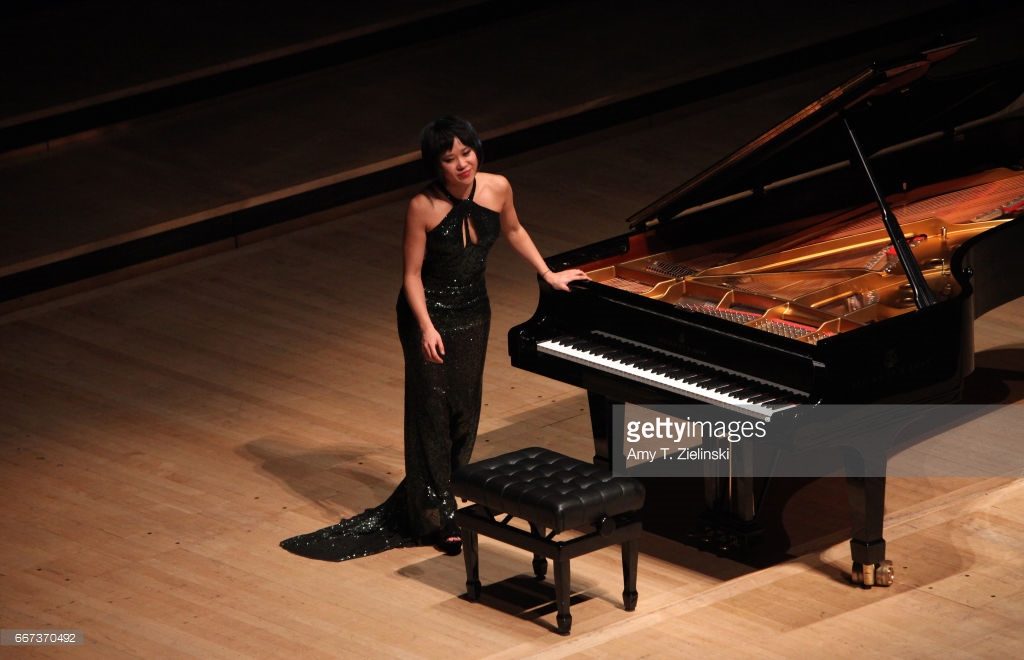 Brahms’s Variations and Fugue on a Theme of Handel demand an epic delivery which dictates that they should not be taken too fast, but Yuja Wang’s immaculate account went like the wind: one had no sense of the requisite majestic muscularity, or of the intensely sweet pathos which is Brahms’s inimitable voice. No matter: for the encores she was back on home turf, dazzling with Prokofiev, beguiling with Schubert-Liszt and Rachmaninov, and perfuming the atmosphere with Scriabin. Standing ovation, of course.

Zarb, dayereh, lyra, cello – you couldn’t get a more incongruous-seeming instrumental line-up on stage than the one Jean-Guihen Queyras and his friends Sokratis Sinopoulos, Bijam Cherirani and Keyvan Shemirani offered in the Wigmore’s latest foray into cross-cultural programming. The lyra is a tiny bowed lute with a penetratingly nasal sound which hails from Byzantine times and is native to Crete, and it’s in every way the absolute antithesis of the cello; the zarb goblet-drum and dayereh frame-drum are Iran’s staple percussion instruments. But Queyras and co are all dab hands at cross-cultural jamming, and did so here to brilliant effect. 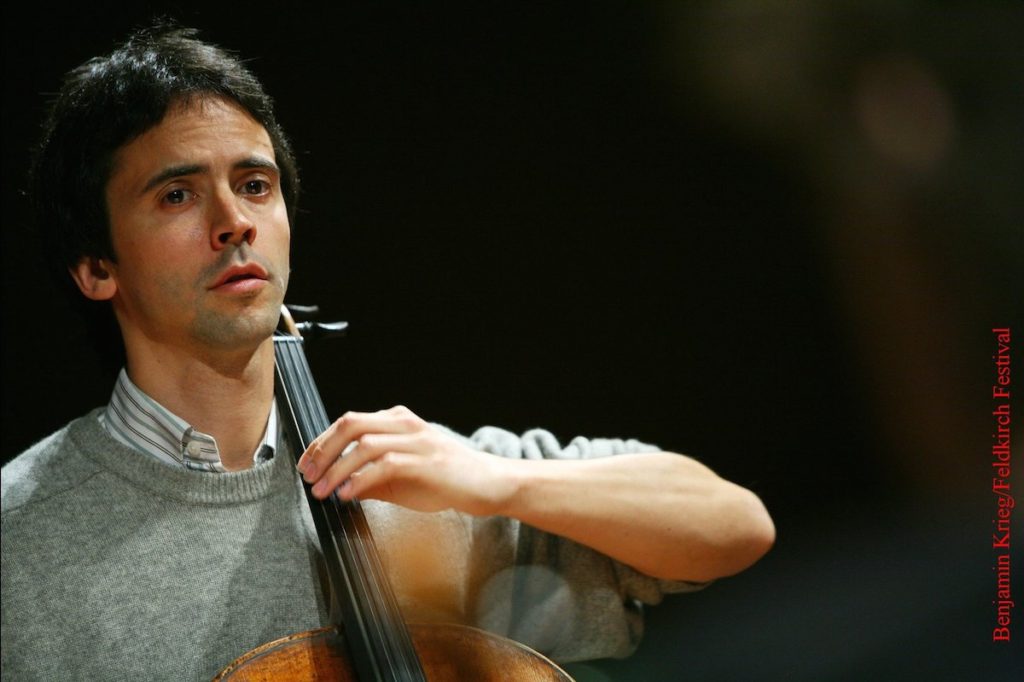 The programme was chosen partly to show possible parallels between avant-garde European music and traditional music of the eastern Mediterranean, but there was less correspondence than might have been hoped: Lutoslawski, Kurtag and Stroppa remained obstinately separate and sealed off, when placed alongside improvisations in Greek, Turkish, and Iranian folk styles. But that didn’t matter: those improvisations were so beguiling and so gloriously freewheeling that one gladly sacrificed European expectations to savour to the full this feast of virtuosity. All these musicians are stars, but there was one extra star hovering unseen over the proceedinga: Ross Daly, Norfolk-born but self-exiled for life to Crete, where he has become the world authority on the lyra, and a prolific composer for it.

Presenting Handel’s music in a London church in which he himself used to sit, with singers backed by a band of a sort he had specified – the London Handel Society’s last concert in St George’s Church, Hanover Square, proved a delight. This time it was vocal duets by soprano Louise Alder and mezzo Emilie Renard with La Nuova Musica, under David Bates’s direction; also including a duet by Handel’s predecessor Agostino Steffani, this was for the most part rare stuff from the seemingly-inexhaustible treasure-house of forgotten Baroque music. 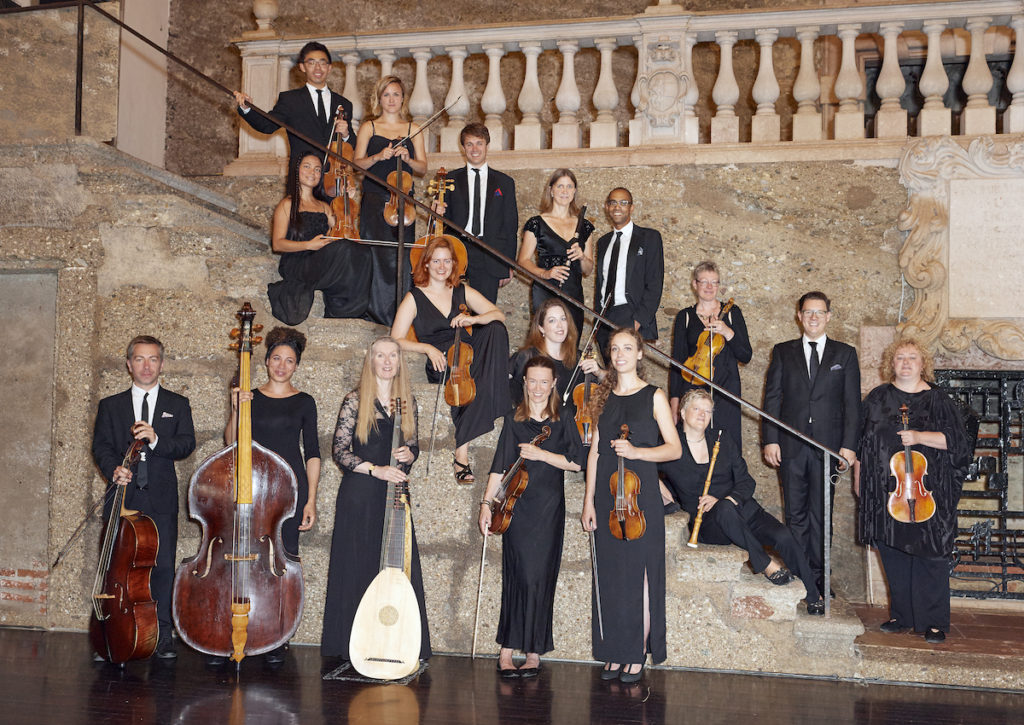 Opening with the overture to Judas Maccabeus, Bates and his ensemble – two violins, viola, cello, bass, theorbo, and bassoon – established a warm and gracefully-inflected sound. It seemed initially as though Alder’s bright and forceful soprano would obscure Renard’s delicately calibrated hues, but the balance of contrasts worked out very pleasingly. In the early duet Tanti strali the bursts of coloratura were elegantly tossed to and fro and then sung in sweet harmony; the melodious languor of Steffani’s Placidissime catene – ‘gentle chains’ – was eloquently reinforced by Jonathan Rees’s cello. The singers’ performance of Handel’s cantata Il duello amoroso became a comic dramatization of a stealthy but lethal emotional castration.

Upping sticks after a terminal row with her landlords at Grange Park last year, Wasfi Kani has built a new auditorium modelled on the Scala in Milan in the gardens of the stately home Bamber Gascoigne has inherited, and she has transferred her company’s name to it: thus it is that Grange Park Opera has now reopened for business in what we must henceforth call the Theatre in the Woods. A year ago this was a hole in the ground; it’s not finished, but it’s fully functioning. Tardis-like in its deceptiveness, it’s much bigger inside than you’d expect, and the raw wood cladding of the interior feels oddly hospitable. Kani has worked a miracle, and we have a new opera house. 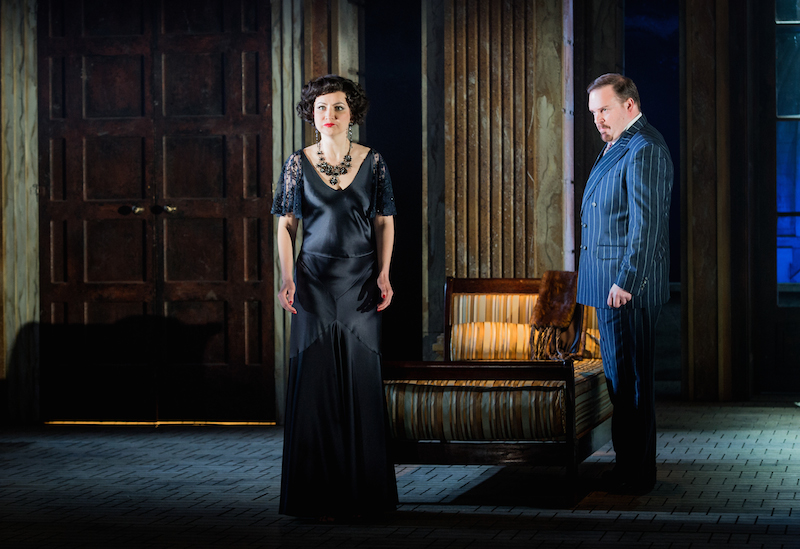 She’s starting with a safe bet: Joseph Calleja as Cavaradossi in a workmanlike if unremarkable production of Tosca directed by Peter Relton. The title role is taken by the Russian soprano Ekaterina Metlova, whose shining sound is unfortunately not matched by any ability to project dramatically: one would say a schoolmaam, not an actress, while Roland Wood’s icy Scarpia lacks the necessary cruel menace. But Calleja’s glorious singing makes the whole trip worthwhile, and who cares if it’s stand-and-deliver until he crumples under the bullets?

Meanwhile, back at Grange Park itself, a brand-new company has been created by the veteran countertenor – and now impresario – Michael Chance: to be known as the Grange Festival, this too has just opened for business. Since Kani stripped out everything moveable from its auditorium, Chance has had to do a total refit, but the result is a slicker theatre; otherwise it all feels like business as usual. This too is an impressive achievement, and the programme for the first two years looks promising.

Chance’s bold opening gambit is a production of Monteverdi’s late masterpiece Il ritorno d’Ulisse in which he plays the offstage part of music director, and the musical result is by and large first-rate. For the central roles of Penelope and Ulisse he has snared mezzo Anna Bonitatibus and tenor Paul Nilon – both singing at the absolute top of their form – and since the work depends on continuo rather than orchestral playing, Chance has brought in musicians from the Academy of Ancient Music and the Division Lobby led by the charismatic Paula Chateauneuf on the chitarrone and Baroque guitar.

But in entrusting the direction and design to Tim Supple and Sumant Jayakrishnan respectively, Chance has taken a gamble which has not paid off. Their background is in community theatre, and they betray absolutely no understanding of the very different demands of opera. They get wrong just about everything which could be got wrong, from distracting and pointless mimed sub-plots, to illegible (sometimes invisible) surtitles, to batty costuming (Penelope dressed up as a lampshade, Neptune in a rubber suit with a snorkeler’s harpoon), to a systematic and perverse undermining of the music itself. One can only admire the steadfastness with which the singers – other stand-out performances include those by Paul Whelan and Gwilym Bowen – put up with the directorial silliness, and stick to their last.

The shadow cast by Charlie Parker, who died 67 years ago, grows ever longer. Young saxophonists still strive to reproduce his classic solos with fidelity to every small inflexion; the bebop he created with Dizzy Gillespie lurks powerfully behind the jazz played today. His art was mercurial, mysterious, and amazing; his life was a short chronicle of self-destruction, with the heroin a necessary concomitant to the creativity.

The show imported by English National Opera and the Hackney Empire from Opera Philadelphia and Apollo Theater Harlem is a rumination more on the life than the art. Consisting of a series of flashbacks from the day Bird died, with him encountering his mother, sundry girl-friends, Dizzy, and a drug-dealer, this is neither a jazz opera nor a musical. But its composer Daniel Schnyder’s insistence that it’s a ‘through-composed classical opera’ does less than justice to its prevailing jazz colouring: musically we’re sometimes in the world of Bernstein and Sondheim, and we are emphatically in New York.

The supporting cast are all first-rate. And although Lawrence Brownlee – the Rossini tenor who was the work’s inspiration – doesn’t play his sax, his charismatic vocalism holds everything together with magnificent authority. Lasting ninety minutes without an interval, this bold experiment may be syrupy and moralising, but it’s also dramatically vivid, and exudes a life-enhancing warmth.