With its God-given melodies, ravishing orchestration, and intricate but whizzing plot, Verdi’s Don Carlo ticks all the boxes, including that of topicality 150 years after its Paris premiere. Based on a play by Schiller but grounded in the history of the Spanish Inquisition, it’s a rumination on libertarianism versus a punitive form of theocracy with which we are now all too familiar. Its eponymous hero, standing shoulder-to-shoulder with his blood-brother Rodrigo, takes up his sword against his father King Philip on behalf of their downtrodden subjects in the Netherlands.

But the mainspring of the plot recalls Hamlet, as Elisabetta, the woman Don Carlo loves, is forced to marry his father. There is also a conflict on another level, between the King and his Grand Inquisitor over the respective powers of church and state: can Philip be forced to murder his own son? The chilling reply is that a rule which held good for Calvary should also apply here. Only Verdi could have woven these elements into such a seamless and gripping whole.

The opening scene between the young lovers plunges us straight into Carlo’s dilemma, moving from his ecstatic joy on meeting his betrothed to shocked despair at the news of her forced marriage, but in this revival of Nicholas Hytner’s staging the scene misfires. Bryan Hymel’s Carlo lacks the subtly-inflected vocal responsiveness which Jonas Kaufmann brought to this scene in the previous revival, while Kristin Lewis’s Elisabetta has been induced, presumably by an unnamed revival director, to pout and flounce like a spoilt child. Another disappointment is Ildar Abdrazakov’s King Philip, with neither the deep vocal heft nor the physical presence needed to create the dark authority of that role. Meanwhile the auto da fe has been tamed, and the ending robbed of its mystery.

However, Hymel and Lewis become progressively more convincing, and there is much else to enjoy here, notably Christoph Pohl’s nobly-sung Rodrigo, Andrea Mastroni’s sonorous Carlos V, Angela Simkin’s bright-toned Page, and Paata Burchuladze’s Grand Inquisitor, a scarlet-robed puppet laying down the law with iron inflexibility. And I’ve never heard the orchestra play with more refinement than they do here under Bertrand de Billy. 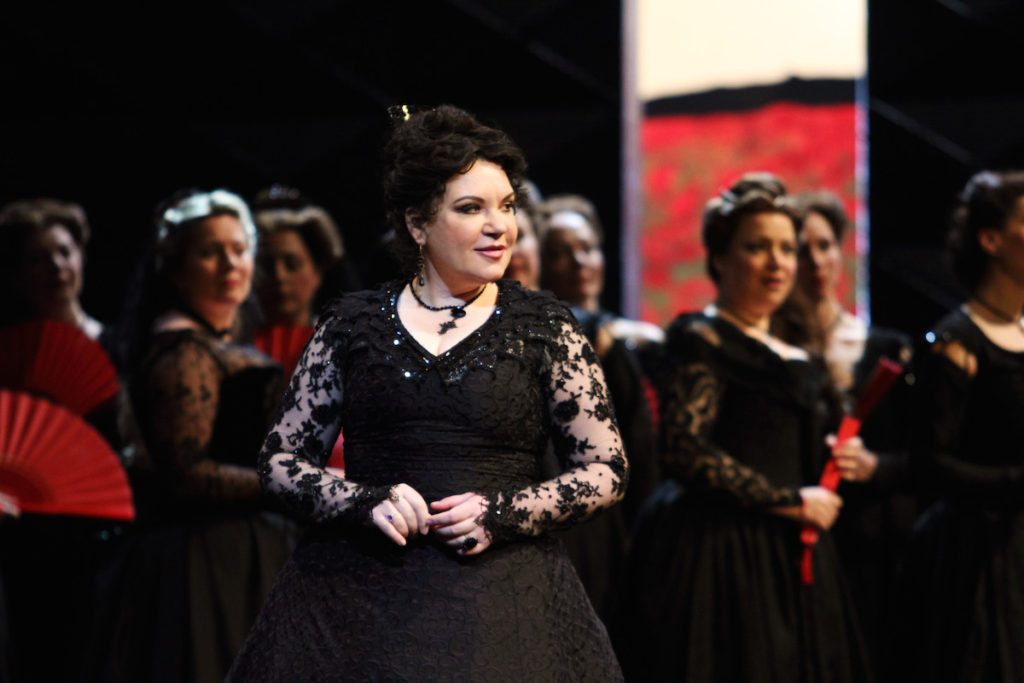 But the evening’s tours de force come from Ekaterina Semenchuk. Whether in her flamenco-tinged veil song, her shocked discovery that her love for Carlos has been spurned, or her agonised confession of guilt over her betrayal of Elisabetta, this great Russian mezzo’s beauty of tone, restrained power, and brilliant characterisation effortlessly command the stage.

The surtitle box says ‘mobiles off’ in Arabic, the proscenium is fringed with Islamic designs, and the orchestra are veiled and capped like players in the Middle East: every effort is made to give us a sense of place. The plot of Cavalli’s Hipermestra derives from antiquity, and this is its first production since its premiere in Florence in 1658: director Graham Vick and conductor William Christie have chosen it in the belief that the passion, heroism, and intrigue of its plot, and the beauty of its score, will appeal irresistibly to lovers of Baroque opera today. 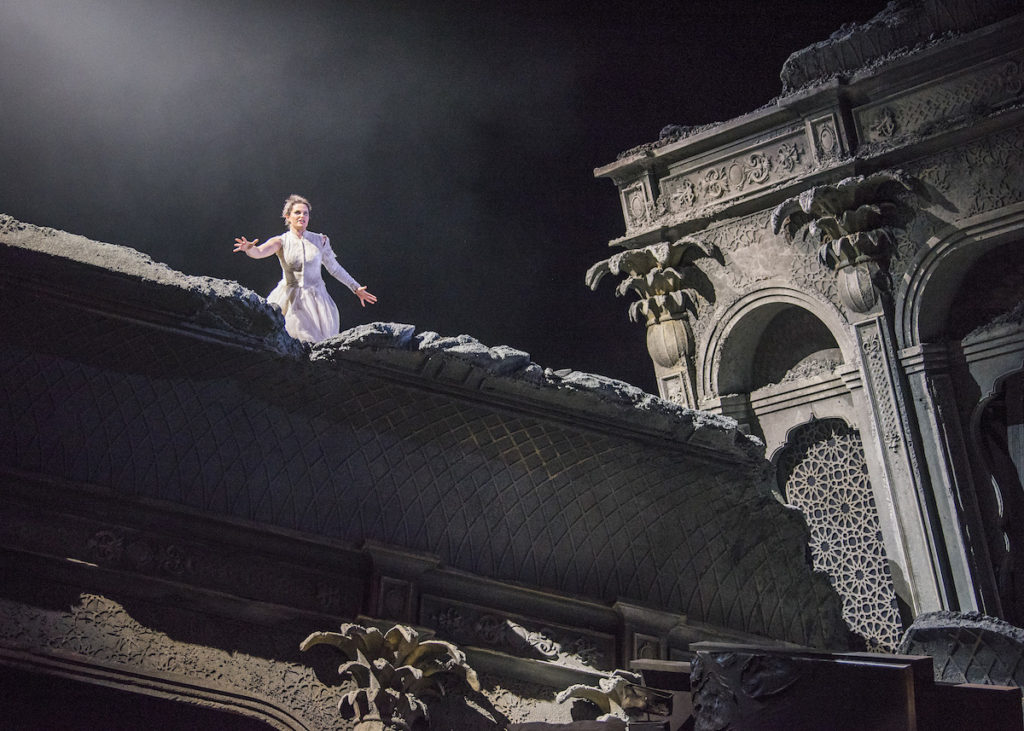 One big production error may qualify that ‘irresistibly’. Cavalli’s style is wall-to-wall solo recitatives unleavened by choruses, and the first two acts run unbroken: the effort of concentration on a labyrinthine libretto for two solid hours makes one long for a brief respite. But this music, which inhabits the same sound-world as that of Cavalli’s mentor Monteverdi (if not on the same exalted plane), weaves a compelling sonic tapestry, particularly with a brilliant ensemble as here – ten singers and eight period instrumentalists with not a single weak link.

The fifty daughters of King Danao are engaged to the fifty sons of his brother Egitto. Terrified of an oracular prediction that one of those fiancés will murder him, he orders them all to be married then killed by their wives; Hipermestra, who loves her husband, refuses – thus is her seeming tragedy set in train. Stuart Nunn’s staging opens with a bling-filled mass marriage in what looks like a Gulf-state hotel, and the action – low comedy alternating with high drama – bowls agreeably along.

But the atmosphere darkens as it becomes clear that Vick wants us to think Syria. This is initially done crudely, as the stage is crammed to bursting with a real-life Merc, military truck, and petrol station. Then come touches of implied horror including a mock beheading, a hinted-at gang rape, and a pile of pebbles for a stoning; there is a strong feminist thread.

But the final act has transcendent authority. It begins with a solo violinist (the redoubtable Kati Debretzeni) playing a lovely solo amid the all-too-convincing ruins of a destroyed city, and it continues with a sequence of dramatic cameos in which singers and players combine and re-combine to resolve the story’s conflicts. One is left with some glorious memories, notably Raffaelle Pe’s haut-contre purity, Benjamin Hullett’s vibrant tenor, Renato Dolcini’s baritonal warmth, Ermoke Barath’s soprano steel, Ana Quintans’s soprano sweetness, and the hilarious lord-of-misrule antics of Mark Wilde’s Berenice, here a dead ringer for Baba the Turk. 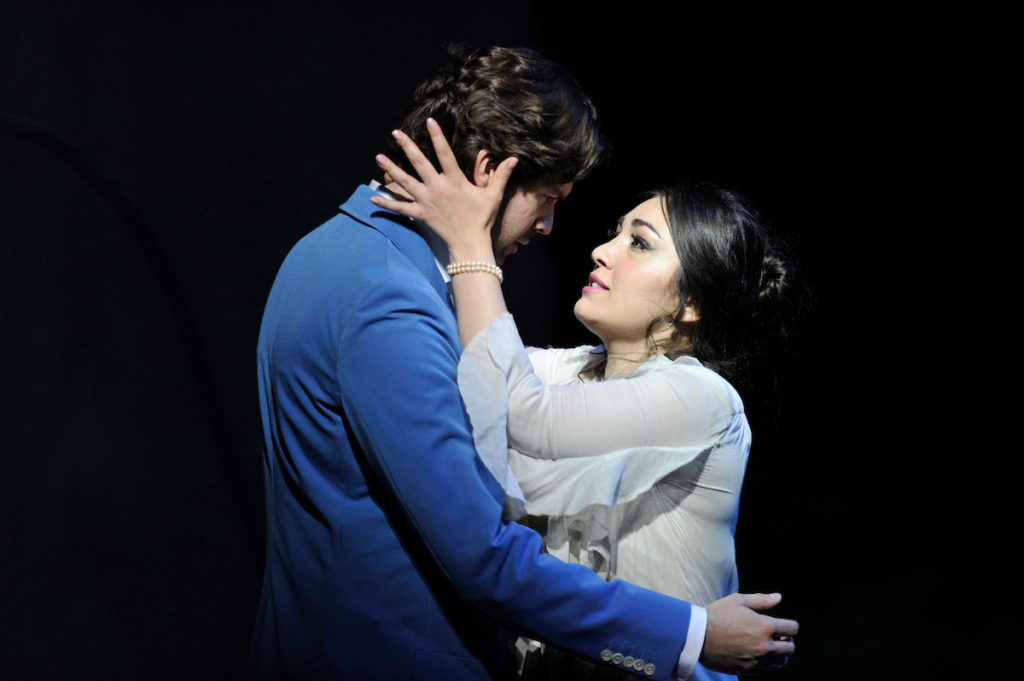 The revival of Tom Cairns’s production of La traviata with Kristina Mkhitaryan as Violetta is outstanding. The restrained naturalism of Cairns’s direction allows this Russian soprano’s performance to play off those of Zach Borichevksy’s boyish Alfredo and Igor Golovatenko’s graceful Germont père to profoundly moving effect. This Violetta has an ordinariness which melts the heart, and her delicately-inflected singing, abetted by Richard Farnes’s sensitive direction in the pit, is a delight.

For those who have forgotten or are too young to remember, David Helfgott was the Australian pianist catapulted to fame by the 1996 film Shine, in which Geoffrey Rush memorably incarnated the tangled story of his life. Helfgott was a child-prodigy whose career was cut short by schizophrenia; after a decade off the rails, he was saved by the love of a good woman, and was taught not only how to live with his disorder, but also how – with astute management – to turn it to financial advantage. I was one of just two London critics who wrote sympathetically about his controversial Southbank recital to launch the film; the others sang a sneering chorus of disapproval.

But it seemed perverse not to be kind, for behind his weird mannerisms lay real poetry in his playing. Twenty years on, he’s back. Any fears this might be a freak-show were dispelled from the start: he’s harnessed his demons, and now plays like a proper concert pianist. Chopin’s first Ballade was accompanied by an excited ‘woo-hoo’ at climactic moments, but that was no more intrusive than Glen Gould’s humming, and the momentum and character of the piece was unaffected. He then rose to the virtuoso challenge of three big Liszt pieces, pausing only to bestow kisses and handshakes on adoring members of the audience, most of whom, it’s safe to assume, were devotees of the film.

The finale was a two-piano arrangement with Rhodri Clarke of Rach Three, exhilarating and smart as a whip. After three encores – starting with a high-octane delivery of Khachaturian’s ‘Sabre dance’ – the evening dissolved into a love-in between performer and audience. And why not? This man, who has just turned seventy, has come through exceptionally difficult trials with his sunny nature intact and his talent brightly burnished. He’s a life force, and people draw strength from him.

Garsington opened its summer season with a production of Handel’s Semele which was finely sung but got hopelessly lost in the coils of Annilese Miskimmon’s labyrinthine directorial concept. What a relief, the night after, to re-encounter John Cox’s production of Figaro, twelve years old but still pristine. This show plays the drama absolutely straight, allowing da Ponte’s witty libretto to shine as it should, and the fact that the four young principals are all of an age strengthens the opera’s blistering social message.

I have never known a Figaro like Joshua Bloom’s – a gale-force character with a thunderous sound, a formidable foil to Duncan Rock’s Almaviva who starts off equally commanding, but gets progressively more defensive as the knowledge dawns that everyone is running rings round him. This process is both comic and touching thanks to brilliant acting; the direction of this production, with its musically-sensitive choreography, is sure-footed every step of the way.

Jennifer France took time to settle into her part as Susanna, but her comic timing is spot-on and her final big aria is ravishing, while Marta Fontanals-Simmons’s entirely credible Cherubino straddles the genders by alternating rutting lust and delicate refinement. Timothy Robinson’s Don Basilio is a vivid commedia dell-arte creation, and Janis Kelly extracts laughter of the sort one more usually expects from an Orton comedy, as the frumpy housekeeper Marcellina.

Everything about this production is felicitous, from the way the set-within-a-set is continually opening out, to the way the real country-house garden in which the auditorium is situated serves as Cherubino’s escape route when he jumps out of the window of Countess Almaviva’s apartment. The nocturnal denouement, sparked by Alison Rose’s dainty Barbarina, and presided over by Kirsten MacKinnon’s regal Countess, has a sweet inevitability.