‘If I were a gambler,’ I wrote in The Independent seventeen years ago, ‘I’d put serious money on a 23-year-old Russian mezzo who will make her discreet solo UK debut in a Suffolk church tomorrow.’ That debut passed largely unnoticed, but as Valery Gergiev began flying her over to London for stage performances of the Russian classics, the penny began to drop. She didn’t win the song prize at the 2001 Cardiff Singer of the Year competition, but her performance in the final moved the Times critic Hilary Finch – no push-over – to suggest that she should have won, with songs by Cui and Kallinikov which were ‘meticulously, yet seemingly effortlessly, sculpted, mesmerising both ear and imagination’. So yes, I wish I’d placed that bet, because Ekaterina Semenchuk is now not merely the Mariinsky’s most treasured resident star. She is also in constant global demand as a member of that small and select group of singers who seem born to incarnate what she calls ‘Verdi’s dark ladies’.

In interview, she positively exudes authority: the diffident girl I met in 2000 has become a hugely forceful woman. And she clearly has a hot-line to those dark ladies, whom she describes as ‘poor women, not villains’, and into whose characters she probes deeply. Azucena, she says, is the saddest character in all opera. As she once explained to a Russian interviewer, ‘I was in my early thirties when I was invited to sing Azucena, and I saw her as a crazy old woman, so I refused. But they insisted, and after giving it some thought, I agreed. The understanding came during the rehearsals: Azucena was not really old, it was her grief that had put years on her. She was probably just thirty, or even younger.’    Amneris, she tells me, is ‘another young soul, a good person – not a negative force’. For the recording of Aida she made in 2015 with Antonio Pappano – one of her favourite conductors – she insisted on rigorously analysing the composer’s intentions. ‘With Antonio Pappano I went through the score, page after page, and we removed all the traditional effects, all the ritardandos, ritenutos, or fermatas, and it emerged as a much cleaner and more precise reading of the text. And we analysed how the characters address each other, and how they should look at each other. It showed another facet to the whole work – another side to the diamond. That is also how I work with Helmut Deutsch in my recitals.’

My first sighting of Semenchuk had been in the unlikely context of a fund-raising soiree at Christie’s, where two young singers from the Mariinsky Academy were being paraded for a well-heeled coterie. First came a tenor called Daniil Shtoda, whose easy grace with Glinka and Gliere marked him immediately as out of the ordinary. Then a girl appeared with a seriously deformed face – Ekaterina Semenchuk’s right cheek was blown up like a football. But her voice had unusual power and beauty, with a thrilling hardness in the low notes; each song was shaped to bring out its internal drama, and you could feel the frisson in the room. I only learned later that she had been in considerable pain: bad dentistry – the Russian curse – borne with good Russian stoicism.

Two months later in St Petersburg, I re-encountered these singers at a conservatoire pancake party where everyone, barring interlopers, was expected to do a turn. This time Shtoda was at the piano, accompanying a series of fellow students who were all pretty special, and again Semenchuk stood out. First, amid general merriment, she delivered Carmen’s habanera with such mockingly predatory aggression that I was relieved she cast my fellow-guest Steven Isserlis as José: by the end he was wishing the floor would swallow him up. Then she abandoned the formalities of Western opera and sang some unaccompanied Russian folk songs, transforming herself into a spirit of the steppes: shouting, foot-stamping, earthy, untameably wild.

Those who worked with Semenchuk all testified to her impetuous nature and instinctive generosity, as well as her rigorous professionalism. Her mentor Larissa Gergieva described her as a born stage artist: ‘She has an uncanny feel for atmosphere, and her voice is a gift from the gods. Such things can’t be taught. And she has a good soul, a noble heart.’ And as Gergieva pointed out, Semenchuk’s life at that time was anything but easy: since her father’s sudden death (he was a surgeon) she had to be the family breadwinner. Her daily routine in St Petersburg – studying one opera by day, performing in another by night – started and ended with a two-hour bus journey through the wilds. 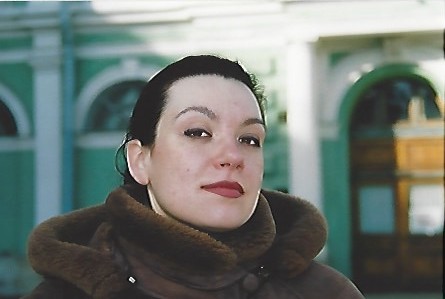 Semenchuk herself alluded to none of this. She was bookish – delving into nineteenth-century Russian novelists and Symbolist poetry – and voraciously keen to absorb all the music she could lay her hands on. She had started playing the piano at eight in her home town of Minsk, then graduated to the guitar and the accordion, on which she initially thought she might build a career. ‘But I always knew I had a voice, and that even at twelve it was unusually low.’ She had acquired her folk songs by listening to peasant singers, but despite her instinctive empathy she refused to take them too seriously: ‘My only ambition,’ she insisted, ‘is to be an opera singer.’

My reason for being in St Petersburg was to review Andrei Konchalovsky’s production of Prokofiev’s War and Peace (quite an evening, in that the imperial box contained Tony Blair and Vladimir Putin having their very first meeting, and getting on like a house on fire). At one point in the opera Semenchuk, still a student and playing the supporting role of Sonya, sang a balcony duet with Anna Netrebko. And though the latter – five years Semenchuk’s senior and already a star – was singing the lead role of Natasha, it was clear their talents were at least evenly balanced, if not actually tipped in Semenchuk’s favour. That show cemented a relationship which has endured: they remain close friends, and often share a stage on the international circuit, as they will at Salzburg in August.

Since Semenchuk was Gergiev’s newest protégé I sought his views on her, but I got a dusty answer. ‘It’s too early for a big article in a London paper,’ he snapped ‘These things can go to Russian singers’ heads and ruin them – I learned this the hard way with Galina Gorchakova. After the first articles in the Western press, she really believed she was better than Callas – and where is she now? I’ve seen too many promising Russian singers who did not fulfil their promise. And in many cases, the Western media contributed stupendously to the fall of their careers.’

But given that the article on Semenchuk was going to appear, what could he say about her? ‘She has promise. My sister was the first to spot her, and it only took me thirty seconds to understand her potential. We’ve given her very intensive musical training, as well as language coaching in French and Italian. Some of the things we’ve set her, she has done well, others not yet well enough. She has to continue her studies. She is still only twenty-three.’

One close associate thought his hostility towards publicity for Semenchuk was simply fear: that like many of his other discoveries, including Gorchakova, Olga Borodina, and Elena Prokina, she too would be wooed away by other companies. But he needn’t have worried: she may now sing all over the world, but her loyalty to him – and to the Mariinsky – remains rock-solid. ‘The Mariinsky,’ she says firmly, ‘is my home, and it always will be.’

She has just sung the Duchess of Eboli to acclaim at Covent Garden. How does she see that character? ‘She is young, honest, clear, but a very difficult person in her reactions, very complex. In each production – in each performance – I see a different facet of her. Each facet tells me what they want from me that night. They tell me through the music, and through the words.’ These ideas are expressed only after a visible mental struggle, and an earnest conversation in Russian with the constant companion at her side: Semenchuk usually only answers interview questions by email. But for me she brings out a pearl: ‘Like a sculptor in some soft, malleable material, you create something. You mould the character like clay.’ 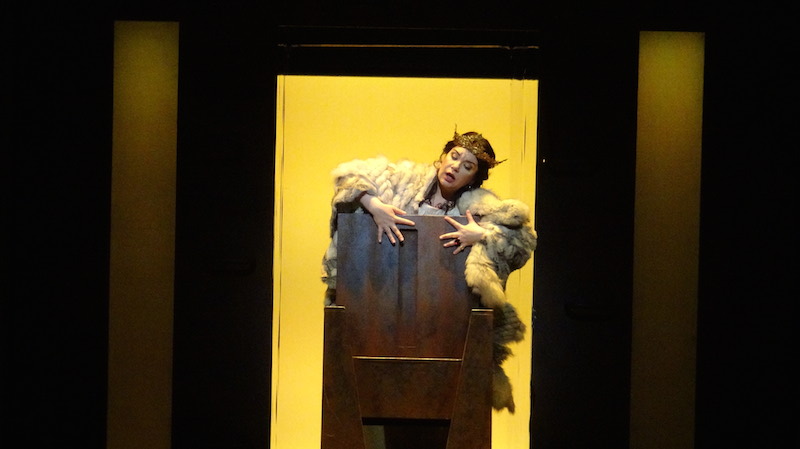 ‘Eboli is a victim,’ she says, ‘like Amneris and Azucena. And so is Lady Macbeth – a victim of herself.’ But in other respects Lady Macbeth is in Semenchuk’s view an exception. ‘She is dark and negative. She is the only one in whom I can’t find kindness and mercy, who pursues her vendetta to the end. I can understand her motives, but when I sing her, I feel only darkness. But I can make her seem alive. I don’t even think Verdi – who was a wonderful human being – empathised with her either. There is a danger in singing these roles – that you may internalise them, even Azucena. It can drive you completely crazy. As Stanislavski and Chekhov showed, you shouldn’t internalise them. You should keep yourself separate – you should not be her. You should see her, and create her, as a painter would. You should teach your body how to incorporate her. I use a kind of yoga for this.’ Her intensely physical, almost serpentine Azucena in David Bösch’s otherwise irritatingly tricksy Covent Garden Trovatore being, I would suggest, another case in point.

She fires up when I mention that one critic took her to task for register-breaks in that performance: ‘Azucena is a character role, as well as being a bel canto one,’ she snaps. ‘I can sing high C and go down as low as I want, without any clicks. If I’m singing a scale, I may vary the volume, but I take care to keep the sound quality even, across the entire voice-range. Sometimes, for a character like Azucena, we may need extra vocal colour, for example adding more sonority in the low register, or singing as though through tight lips. But I emphatically don’t do clicks!’

She fires up again when I say that in my view her singing embodies quintessentially Russian qualities. But that is because she is so used to hearing the adjective ‘Russian’ used negatively: ‘I’m proud that I’m Russian. But in any case, it has nothing to do with my singing.’

Semenchuk takes particular pleasure in undermining audience expectations when she thinks those are misplaced. Her imperious Carmen, for example, is less brash and noisy than most: ‘If you look at the score, you will see that sections which are usually sung forte are marked piano or mezza voce. There is always a place in it for intimacy.’ And she’s a tireless champion of the Russian song repertoire: the only recital disc she has made so far – accompanied by Larissa Gergieva, and released by Harmonia Mundi in 2006 – offered a ravishing journey through the solo vocal works of Gliere, Taneyev, Rachmaninov, and Tchaikovsky. As she has dozens more Russian songs up her sleeve another CD, preferably including some of her wonderful unaccompanied folk-song renditions, would seem an obvious next move. She is passionately concerned to see that Russia’s indigenous musics are preserved.

To listen to this singer in recital is to realise that there’s a purity and stillness at the core of her art, which is guarded with an unsleeping professionalism. And though she’s constantly traversing the globe for her operatic appearances, she makes sure to touch base regularly with her family in St Petersburg, where, among other domestic pleasures, she unwinds by playing Bach preludes and fugues. Yes, a musician first and last.

Ekaterina Semenchuk sings Amneris in Neshat Shirin’s production of Aida at Salzburg from August 6, with Anna Netrebko in the title role.

This article appeared in the August issue of ‘Opera’ magazine