Donizetti composed his Scottish tragedy nearly two centuries ago, yet real life has only recently caught up with it. Lucia loves Edgardo, but is pressured by her brother Enrico to marry Arturo to save the fortunes of her clan; tricked into believing Edgardo to be unfaithful, she consents to the wedding, murders her husband, hallucinates a reunion with Edgardo, then kills herself; grief-stricken Edgardo kills himself over her dead body. 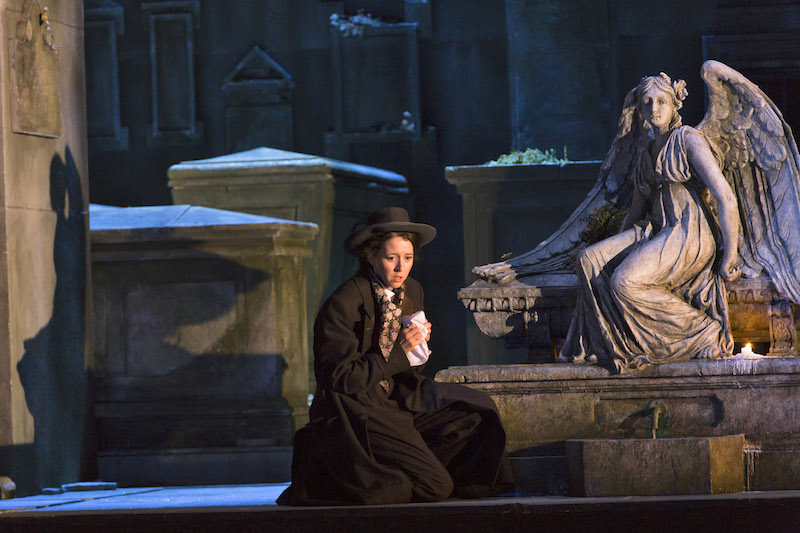 A forced marriage: we regularly read about such things – and their frequently gory outcomes – in the papers. Director Katie Mitchell has put a spin on the story which doubles its topicality, because her Lucia is feisty rather than submissive, and is carrying Edgardo’s child, which in despair she aborts bloodily.

The original libretto has two ghosts, but Mitchell’s spooky staging is filled with apparitions. Vicky Mortimer’s handsome baronial sets are presented throughout in split-screen form – bedroom stage-left and bathroom stage-right, or courtyard opposite banqueting-hall – and on the production’s first outing last year this led to problems, with mimed scenes on one side taking our attention away from sung ones on the other; moreover, the love scene between the principals was made flesh with a comically explicit bonk. It’s good to be able to report that these problems are now resolved, and that as a result we can enjoy some outstanding performances.

Christopher Maltman’s Enrico is a boldly-drawn character who provides the necessary malign focus, while Michele Pertusi’s stentorian tones as the Calvinist chaplain give the whole thing ballast. Meanwhile in Lisette Oropesa’s Lucia and Charles Castronovo’s Edgardo we get an ideal pairing, both dramatically and musically. Castronovo’s bel canto is unfailingly easy on the ear; Oropesa, making her Covent Garden debut, sings with a delicate expressiveness which in her mad scene deservedly brings the house down; Michele Mariotti conducts with persuasive grace.