Rossini’s Semiramide premiered in Venice in 1823, and throughout the nineteenth century it was a popular vehicle for great voices, but in the twentieth it was all but forgotten. David Alden’s new production for Covent Garden is its first staging there since Victorian times, and one can easily see why it was both an obvious choice and a risky one. The vocal writing is glorious throughout, but the plot is deeply problematic: if its original description as a ‘tragic melodrama’ sounds like a contradiction in terms, it is indeed one. It’s a Gothic-Romantic fantasy punctuated by divine interventions, with murder and incest as its guiding threads; there are echoes of Hamlet, Macbeth, and Oedipus Rex. 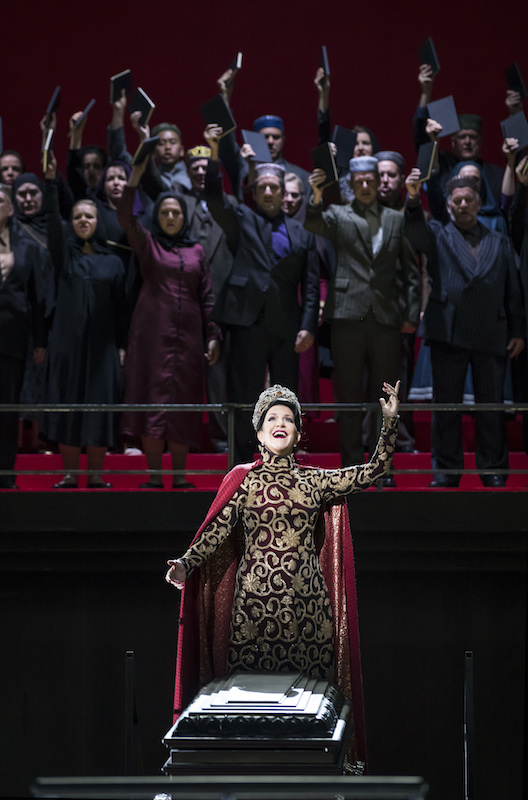 Alden’s staging suggests a huge wrestle to extract meaning and relevance from it all, and he only partially succeeds. He has placed the plot’s original Babylon in a militarised and Islamised Middle East, and the statue of Baal on which the curtain rises looks like a modern dictator. His female chorus wave little black books as they sing, and his male chorus, togged out like mullahs, enact odd little knee-shuffles with regimented precision; the smoke which periodically envelops the stage increases one’s feeling that it really isn’t worth trying to make sense of things.

On the other hand, Semiramide’s grossly sexualised costuming, and the presentation of the captive princess Azema – over whom the male characters fight – embody contemporary feminist tropes: the pure-toned Jacquelyn Stucker, who incarnates the strait-jacketed princess, copes heroically with the director’s requirement that she should alternate between convulsive fits and catatonic trances.

That this show should make a stunning evening is thanks entirely to the music. Antonio Pappano and his orchestra bring out all the colour and energy in Rossini’s score, and three soloists lift this score to stratospheric heights. Mezzo Daniela Barcellona invests the Oedipus-like Arsace with fluent expressiveness, while tenor Lawrence Brownlee, as the lustful Indian king Idreno, delivers his high coloratura with ineffable grace. And in the title role Joyce DiDonato commands our rapt attention at every moment: the beauty, power, and perfection of her singing – the latter most apparent in her exquisite pianissimi – are harnessed in the service of a dramatic intelligence which almost convinces us that this tall tale is worth telling.