Arthur Sullivan and WS Gilbert didn’t like each other, didn’t have much in common, and both had loftier ambitions than the creation of operettas. But if they’d stuck to those ambitions, they wouldn’t be remembered today. They were put in harness to create an English school of comic opera to rival the Parisian operettas of Offenbach, and while sometimes equalling that composer in melodic invention, they outdid him in terms of both comedy and satirical bite. Yet even today – or perhaps especially today, given the new nervousness regarding any kind of gender-joke – there are supposedly sophisticated people who don’t get the point.

Timeless this art-form may be, but it can still be tricky to bring off. Jonathan Miller’s peerless Mikado has been packing the Coliseum for thirty years, but other G&S productions have missed the mark: Mike Leigh’s ENO Pirates were too quietly tasteful. 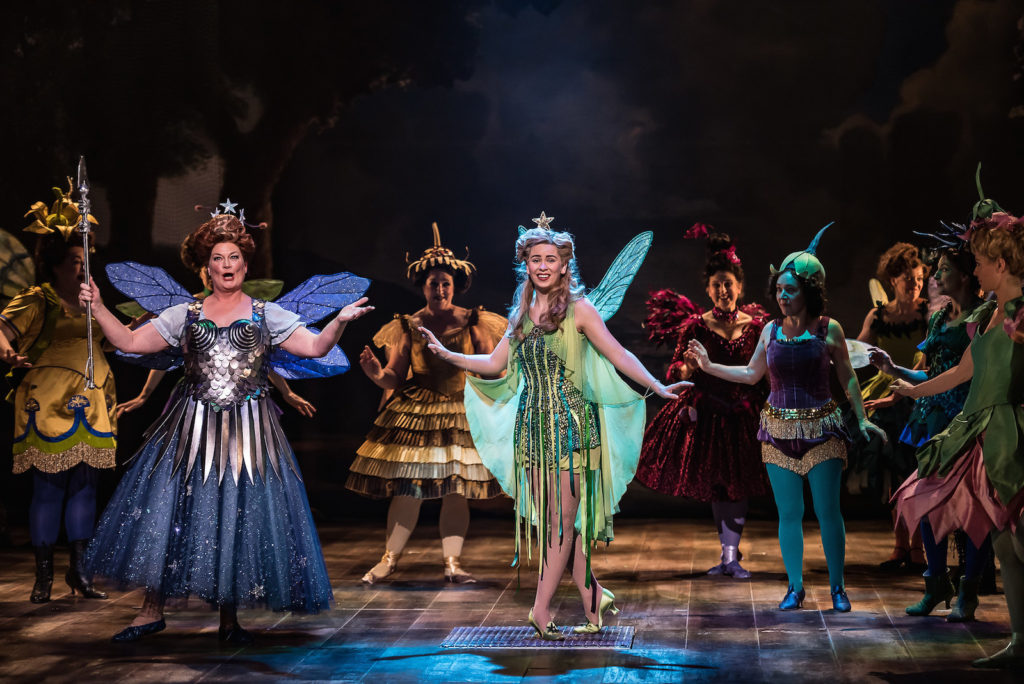 Iolanthe includes some deliciously convoluted gender jokes, and at the same time lets fly at the British political class in a manner which needs no updating. The fairy Iolanthe has fallen in love with a mortal, and has given birth to a half-caste son, Strephon, who is a fairy down to the waist but has the legs of a mortal. When, after the House of Lords has been drawn into the plot by an irate Fairy Queen, and Strephon has been put in charge of them as a punishment, his first decree is that – shock horror! – entry to the peerage should be by competitive examination.

Apart from the inevitable Boris peer, there are virtually no topical allusions in Cal McCrystal’s new Iolanthe, which sticks faithfully to the text and allows conductor Timothy Henty to tease out all the beauties in the score. The costumes for the fairies are wild, and the designs by the late and much-missed Paul Brown are crazily opulent – the Lords make their appearance aboard Stevenson’s Rocket – but McCrystal is a slapstick merchant, and he’s created a frantically busy backcloth of running sight-gags and stuffed animals which have little connection with the plot. Moreover, he opens with a bolted-on piece of music-hall by a Victorian fireman which unhelpfully defuses the action in advance (and contains a piece of tastelessly sexist smut which should be excised forthwith).

The first two acts are too effortful, too careful – even that celebrated farceur Andrew Shore seems to be reining himself in – and the result is nowhere near funny enough. The first song which brings the house down comes very late on – ‘In for a penny, in for a pound’ – and that is thanks to the fact that Ben Johnson and Ben McAteer find exactly the right mode of deadpan deliberation which, in their heyday, the unjustly-axed D’Oyly Carte company (which some of us still remember) had to a T. McCrystal should understand that there is a world of difference between this and am-dram. But this evening does offer some fine individual performances. Yvonne Howard’s Fairy Queen is splendidly Wagnerian, Samantha Price as Iolanthe makes the most of her big Verdian aria, Ellie Laugharne’s Phyllis charms, and Marcus Farnsworth’s tap-dancing Strephon is winningly ingenuous.