As nights at the opera go, this was a strange one. By the end of Act One I was eager to leave, and I felt pretty much the same about Act Two, but Act Three, which must count as the most original gloss ever to be perpetrated on Verdi’s original, cast an arresting and oddly satisfying spell. 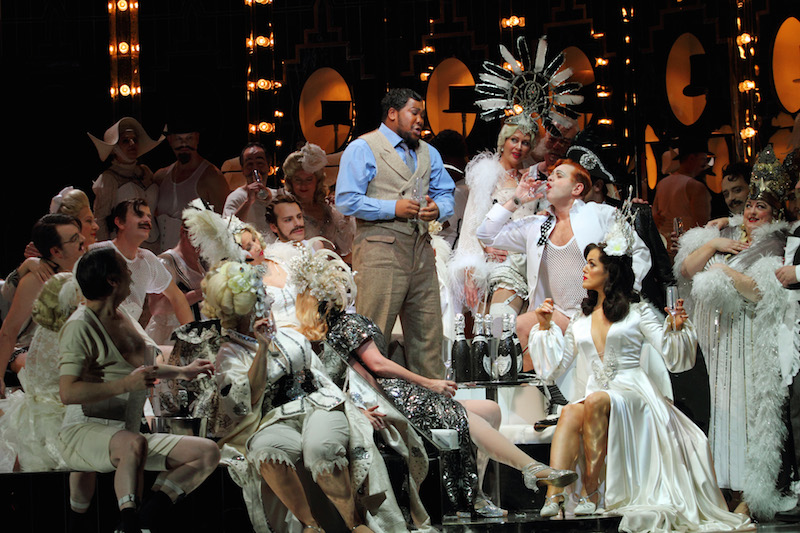 This was the first production to be directed by Daniel Kramer as ENO’s artistic boss. It replaces the stylish but misconceived effort which Peter Konwitschny foisted on the company four years ago: Kramer’s version, a co-production with Theater Basel, comes freighted with great expectations.

He told the Evening Standard last week that he ‘wanted to dazzle a commercial audience’, and when the curtain goes up, it’s on a dazzling palace of tawdry bling. This is purportedly modelled on a photograph of a turn-of-the-century Parisian brothel. But it’s more like a glorified Essex pool-party in which a pullulating crowd of semi-naked figures are indulging in every kind of cross-dressed, enthusiastically perverted sex.

Presiding as a high-camp Gaston, Aled Hall introduces Claudia Boyle’s Violetta, but it’s hard to keep track of her as she merges with the melee, and her sound is so small that even the air-conditioner drowns it. When Lukhanyo Moyake is introduced as her lover-to-be Alfredo, the same problem arises: he too has a small voice, if also an engaging one, and he too tends to merge with the crowd. Their tentative love-making has a perfunctory, mechanical feel, and when Boyle gets to do her big number – eleven minutes of high-octane bel canto, covering a gamut of the passions – our attention is held by her desperately busy and strangely awkward body-language, rather than by what she is singing about; her diction is weak, and one doesn’t believe a word of it anyway.

Act Two takes place in a minimalist garden in which Alfredo is improbably planting a rose, while Violetta slumbers on a couch swinging from the rafters; it’s only when the stalwart Alan Opie comes on as Germont that we enter a believable operatic reality, in response to which Boyle raises her game. The duet-duel is sung with conviction, and when Violetta gets out a knife we first expect her to plunge it into his breast, and then into her own – but no! She uses it to cut a hole in the piece of astroturf on which she is kneeling, and in which she proceeds wrap herself. Ah, a metaphor for wanting the earth to swallow her up… 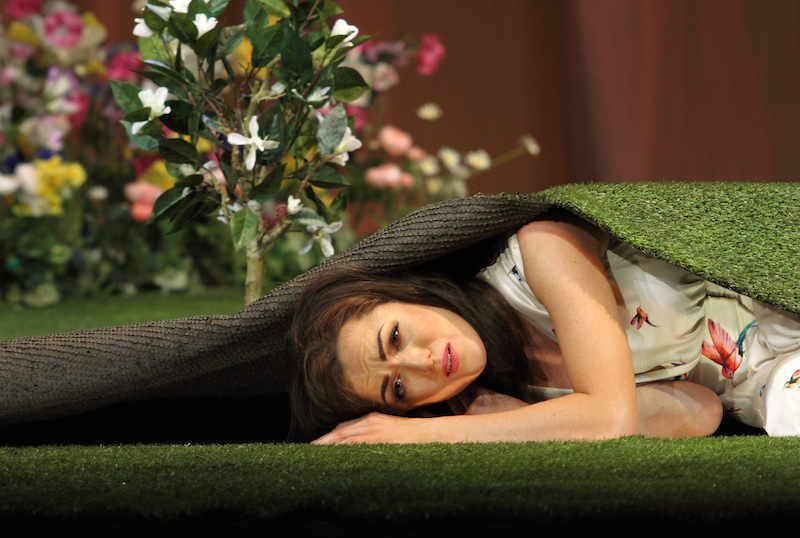 Which is what she is engaged in, rather than dying in bed, as the curtain rises on Act Three: waist-deep on her own grave, she’s busily shovelling spadefuls of earth. Boyle may not have the vocal heft needed for Act One, but as her illness encroaches she finds an appropriately etiolated sound. Meanwhile, despite some toe-curling bits of choreography, Moyake induces us to believe in his grief and desperation. Finally, against huge odds of its own making, this bold reading of the plot works dramatically.

By and large this is a cack-handed production, but two other things contribute to its partial redemption: the refined orchestral playing under Leo McFall’s direction, and the valiant performance of the chorus.