Like Thomas Hardy with his condemned Tess – ‘a pure woman’ – Dmitry Shostakovich saw the merchant’s wife Katerina Ismailova, aka his double-murderer Lady Macbeth, as ‘a talented, clever, and exceptional woman perishing in the nightmarish conditions of pre-revolutionary Russia’. He gave her music of melting pathos, and he lined her route to Calvary with a brilliantly variegated succession of scenes – gaudy or grotesque, comic or cruel, and sometimes all these things at once. 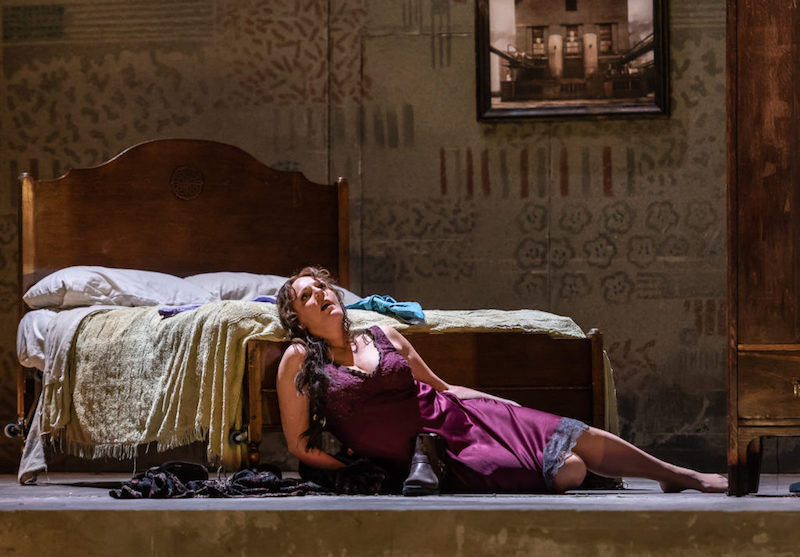 After thirteen years in the wings, Richard Jones’s Covent Garden production of this masterpiece has been dusted off, and it’s still magnificent. John Macfarlane’s designs bring it up to the Fifties, and the worn and grimy underside of provincial life in Soviet Russia emerges with horribly convincing authenticity. Jones’s direction takes all its cues from the music: raw, visceral, and uncompromising, it also has wonderfully off-the-wall moments with more than a touch of Gilbert and Sullivan. And if the murders breathe the grand guignol of Joe Orton, the atmosphere of the final act, in which Shostakovich harks back to Dostoevsky’s Notes from the House of the Dead, is more akin to the dark world of Boris Godunov. Jones’s portrayal of convict life on the Steppes is a thousand times more chilling – and more believable – than that which director Krzysztof Warlikowski served up in his misconceived ROH production of From the House of the Dead two months ago.

This revival is very strongly cast. Rosie Aldridge as the gang-raped Aksinya, John Daszak’s cuckolded Zinovy, and Wojtech Gierlach’s Priest each compel belief, while Aigul Akhmetshina makes a vixenish Sonyetka and, although she is the only Russian, the ensemble as a whole gives an entirely convincing impression of Russianness.

The three central characters are transcendently portrayed. John Tomlinson’s blustering and bludgeoning father-in-law Boris is a huge and malign presence until his tragic-comic demise. The American tenor Brandon Jovanovich incarnates the seducer Sergey with provocatively care-free abandon and a sweetly persuasive tone. And Eva-Maria Westbroek brings a hint of Salome to Katerina, without diminishing any of the pathos and beauty of her arias, the first being a yearning call for companionship, the last a greeting to the still, chill waters which will swallow her up.

This is in many ways an exceptional evening. Making lightning changes of costume and character, the chorus are in wonderfully nimble form. The presence of trumpets, harps, and percussion in the side-boxes give the whole event a surround-sound feel. And from the pit Antonio Pappano brings out all the colour and magic of the score, with its expressive oboe and cello solos, and its mischief on bassoon and trombone.