Highgate Choral Society – a musical community like no other

The reading was to take place in a rough-and-ready little theatre under a Waterloo railway arch. The title of the play was Short Memory, and we’d been told it was about dementia: it all sounded grimly virtuous. In the event we were drawn into a drama which was comic, studded with surprises, and full of pathos, as a variety of social, financial, and sexual themes were woven into an emotionally resonant tapestry. And the most unusual thing was this: the whole play sprang out of – and was framed by – a rehearsal of Handel’s Messiah, delivered by singers whom I happened to know: members of Highgate Choral Society, to which the play’s author Richard Roques belongs, as do I.

This 220-member choir is one of the oldest in Britain, and evolved into its present form via the status of a humble local authority evening class. It’s very much a community choir, and depends on voluntary work by its members for everything from basic administration to the multifarious tasks involved in putting on concerts and organising tours abroad. I joined it after a bereavement, and found its welcoming atmosphere – plus the thrill of joining my voice with others in Bach’s B minor Mass – the best therapy in the world. Asking my co—choristers what drew them to the choir, and what keeps them there, I find their replies drive at the same point from different angles, and go a long way towards explaining why choral singing is now so much in vogue.

Marie-Claude Gervais, a social psychologist from Montreal, puts it philosophically. ‘There are very few things in life that are unambiguously good, but being in this choir is one of them,’ she says. ‘It connects you to the most elevating things which mankind has created. And like yoga it connects you with yourself. Yet you’re nothing without the coming-together with everybody else.’ For Elizabeth Wardle, discipline is as much the attraction as the sociability of it all: ‘Singing uses all of you – body, intellect, emotions. It’s totally involving.’ For psychotherapist Gill Dunbar, who spends her days listening to other people, singing is a release. ‘And I love stepping outside my part occasionally, and hearing the whole. It’s very moving when everything comes together.’

My baptism of fire with the Bach B minor came as a shock. I had assumed that my sight-reading skill and past singing experience – Monteverdi and Gesualdo, the Elizabethans, Stravinsky – would allow me to sail comfortably along, but this work was awesomely difficult, and conductor Ronald Corp, assisted by his keyboard wizard Alex Wells, was whipping us along at a ferocious pace. What unnerved me was that my colleagues were so forcefully on the ball. Then I noticed how dog-eared and much-pencilled their scores were: they’d travelled this road before.

‘I stay because I learn,’ says Labour historian Martin Upham. ‘Thanks to the HCS I’ve encountered 500 years of mainstream choral music, supplemented by a cappella works via chamber choirs. This I owe entirely to Ronald Corp, who disguises erudition behind (almost) unfailing good humour. Listening to his advice, and studying the score at home, you transcend the limits of your technique.’

These singers are all amateurs, and Corp hates turning away would-be choristers, though he does so if they are clearly no-hopers. He draws a sharp distinction between the HCS and the Crouch End Festival Chorus, for example, whose professional work requires that they be top-notch at all times. Yet he manages to extract very decent performances –and on occasion genuinely inspiring ones – when the HCS concerts come round, beefed up by professional soloists plus Corp’s New London Orchestra. ‘The choir may still have a village community quality, but our standard is high and our reputation has grown,’ he says. ‘So the people who join know they’d better be good.’ 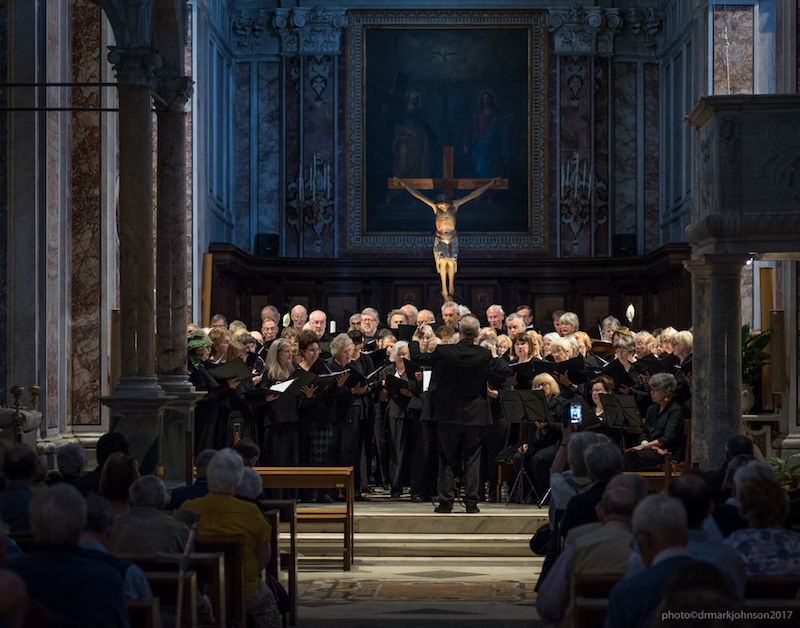 He leavens the repertoire of much-loved classics – Messiah, the Verdi Requiem, Bach’s B minor Mass – with less familiar works, though he’s sorry the bums-on-seats requirement precludes things like Dvorak’s Requiem. And he accepts that the Renaissance a cappella repertoire is out of the question, except in the choir’s small-scale weekend workshops. ‘I really don’t want to do a Palestrina mass with two hundred people,’ he says. ‘It’s not the right sound world.’

But as he points out, most of the new choral music being written at present is for chamber choirs. ‘Where is the next War Requiem coming from? Or the next Child of Our Time? We’re not writing music any more for the big choir.’

Actually, he is. In addition to running an orchestra plus three choirs – and also officiating as a non-stipendiary Anglican priest in Holborn – this remarkable man is ceaselessly composing, and his discography is now formidable. Many of his works are for voice and chamber accompaniment, with literary origins and a spiritual dimension as his particular hallmark; his passionately heart-on-sleeve oratorio And All the Trumpets Sounded is based on the Dies irae, Walt Whitman, and the English War Poets. His latest work, Letters from Lony, is a graceful chamber setting of letters sent by a Jewish lady from war-time Amsterdam – before her murder in Auschwitz – to her grand-child in Britain, a gentleman whose real-life wife now sings in the choir. The audience at its premiere at St Jude’s was moved to stunned silence by the unspeakable pathos of its conclusion.

This musical community has deep roots, and its branches extend far and wide.