It goes without saying that 24-year-old Jacob Collier is a phenomenon. There’s no instrument he can’t play, and he sometimes plays several at once. He made his name through YouTube multi-track arrangements of songs by Jerome Kern, George Gershwin, and others, for which he recorded all the voices. He’s a keyboard wizard with a preternatural ability to modulate, Houdini-like, through the most improbable harmonic sequences. He’s in demand as a collaborator by leading lights in every branch of showbiz, and he’s very big in Japan. 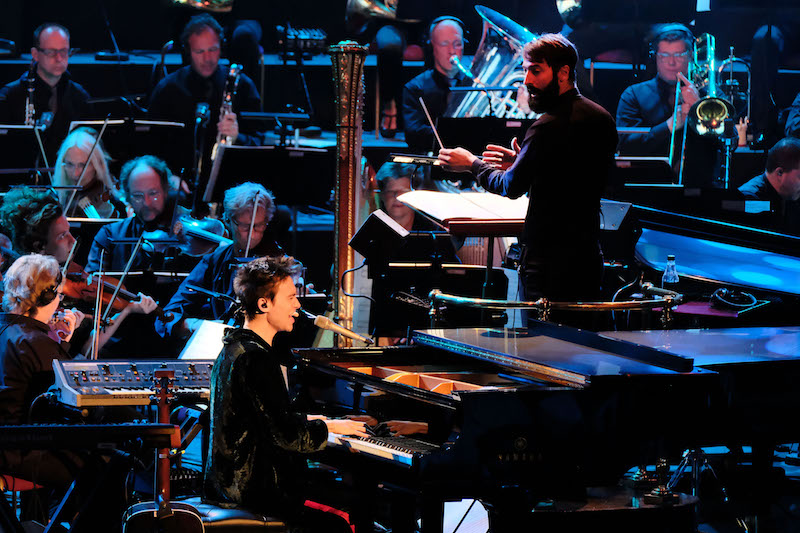 For Prom 7 he was joined by the folk-singers Sam Amidon and Becca Stevens, the Gospel sextet Take 6, the Moroccan gnawa singer Hamid El Kasri plus his backing group, and the seventy-piece big-band Metropole Orkest under Jules Buckley’s direction.

He ran on stage like a gawky teenager (though offstage he’s a suave young gent) with arms and legs flailing in all directions, and rushed through the orchestra banging, plucking, and playing everything within reach; then he bawled into his voice-synthesiser like a dog howling at the moon. Orchestral soup prevented his brief snatches of pianism being audible, or anything resembling a song, though the programme indicated that two had been sung before Sam Amidon came on in a sudden hush to sing the third.

And so it went on, with Buckley and his band drowning anything which threatened to bring the noise down to a human level: a snatch of Gospel, a sweet little duet between Collier’s guitar and Stevens’s ukulele, or anything from the Moroccan singer and his guimbri – all were lost in the din. And as the evening progressed, Collier’s self-congratulation intensified. ‘Now I’m birthing a new song of mine’, he announced to the assembled multitude before delivering a syrupy little number, ‘it’s tremendous to have you guys in my life.’ To which, for some reason, the multitude responded ecstatically.

Well, a lot of it did – but definitely not all. A self-regarding schmaltz-fest of this industrial strength was clearly more than some people in the hall could bear. Collier can do a nifty one-man act, but here the boy had far, far too many toys in his pram.