Post-Weinstein, and following revelations of world-wide corruption in the Catholic church, recent history has played into the hands of any director who wants to give Puccini’s Tosca topicality. Edward Dick and his team have eagerly grabbed this opportunity: their production for Opera North is both viscerally shocking in its violence, and queasily recognisable in its portrayal of the deal which power likes to make for sex.

Robert Hayward’s chillingly satanic Scarpia receives his intended rape-victim Tosca – here the superb Giselle Allen – not in his office, but lounging complacently on a day-bed; when he lasciviously loosens his trousers in anticipation of action – unaware that Tosca has a knife behind her back – the contemporary allusion could not be clearer. She plunges her knife into his crotch again and again, till the gore spills onto the floor. 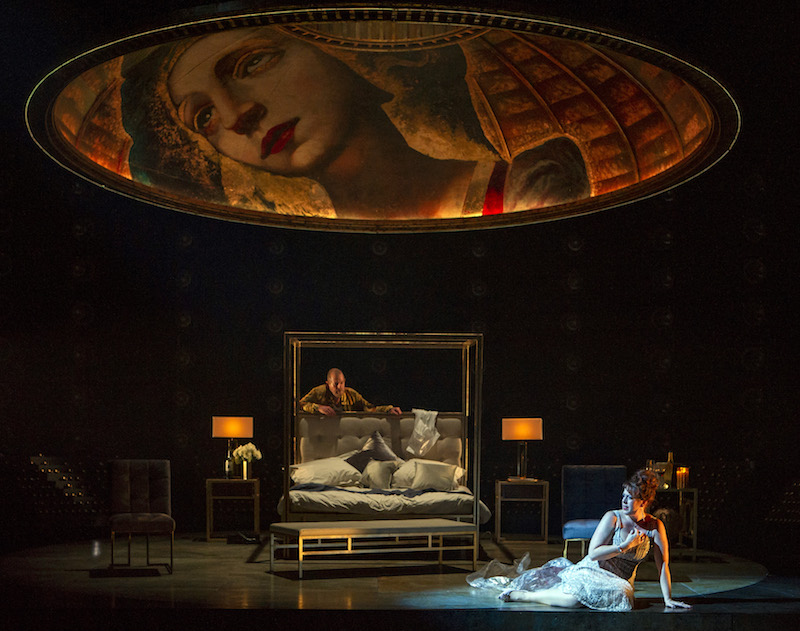 The costumes may suggest the Sixties, but this Tosca is invited to watch her lover’s torture not through a window, but on skype. And when his execution comes, this Cavaradossi – naked and half-dead after his session in the torture-chamber – is thrust into an orange jump-suit. His gunning-down has the squalid pathos of a back-street killing of the sort we hear about in Syria or mafia-run Mexico. This is drama to hit you in the gut, and it chimes with the demands of Puccini’s music.

And it feels real from the start, as Matthew Stiff’s Sacristan potters about in the church vestry and John Savournin’s Angelotti – on the run from the police – abseils down from the ceiling. There’s none of the usual fake jollity in the rough-and-tumble of the mixed choir which frames the lovers’ tryst. This Tosca is as stagey as her day-job as an actor would suggest, by turns petulant and playful, and with Rafael Rojas as her foil the couple seem happy in their love. Meanwhile Scarpia plans his amorous conquest with a pleasure intensified by the knowledge that she will fight him every inch of the way.

Everything about this production works as it should, from Tom Scutt’s simple but effective staging to Antony Hermus’s energised conducting, and the direction is admirably light on its feet. The singing is excellent: Allen’s ‘Vissi d’arte’ is a moving retrospective evocation of a life lived in the service of art, while Rojas’s ‘E lucevan le stelle’ rings out with heroic plangency; Hayward constantly and cleverly adjusts his tone to suit his evil purposes. The hushed fervour of the off-stage chorus sweetly counterpoints the life-and-death battle on stage; Ben Hayes makes something unusually beautiful out of the shepherd boy’s song.

The Victorian opera house in Leeds is the most intimate of venues; I know of no better argument for travelling north than to catch this superb production there.