A hundred years ago, British maps of the world showed large areas in red: the British Empire ‘on which the sun never set’, with India the largest of those areas. Carry out the exercise again today, but this time mapping the colonising spread of European classical music, and you’ll find even more of the map coloured blue and yellow. But you won’t find India there at all. 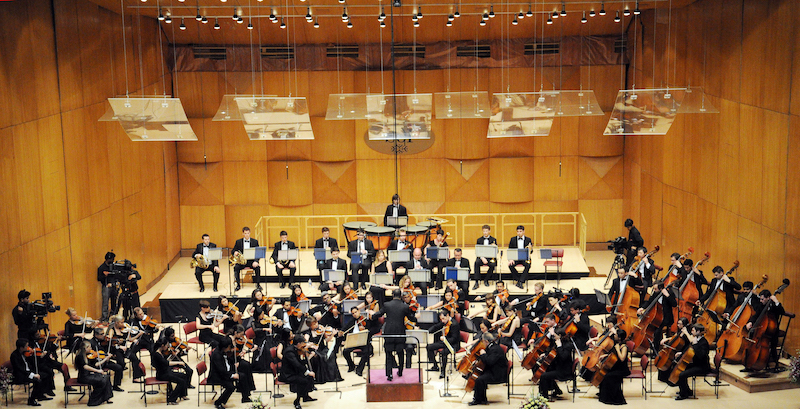 Why has European music spoken with such persuasive authority? Politics and economics have a lot to do with it, coupled with the fragility – under the onslaught of urbanisation and industrialisation – of many of the local musical musics it has supplanted. The reason it’s made no headway in India lies in the sheer resilience of that country’s two great classical traditions – Hindustani in the north, Carnatic in the south. Neither is capable of making great symphonic statements as European music does, but otherwise they are sophisticated and perfectly-evolved musical systems. India doesn’t need our music.

Enter the Symphony Orchestra of India, making its UK debut with Zakir Hussain, the greatest tabla virtuoso in the world. The piece de resistance is Hussain’s tabla concerto which boldly essays to bridge what seems an unbridgeable divide. In his programme note, Hussain claims to be ‘having fun with the orchestra’ while also retaining ‘the validity and authenticity’ of the Hindustani tradition, but the results are middling. Initially he and individual players – then instrumental groups – take turns in the limelight with quick snatches of melody, then the music settles into longer blocks, with the orchestra repeating tabla rhythms in unison. It’s all quite pleasant, but one wishes to hear more of the real Hussain magic: he may only work with two hands and two small drums, but he’s an orchestra in himself. We’ve had some successful sitar concertos, but I don’t think this new attempt to bridge the divide will lead anywhere very interesting.

The rest of the concert is conventionally Western – a Berlioz overture and Rimsky’s Scheherazade, the latter embellished with fine solos on violin and bassoon. But the conductor, Zane Dalal, seems to have an aversion to pianissimo, and one does have to wonder when this brave enterprise, stuffed with Kazakhs and displaying only a handful of Indian players, will live up to the promise of its name.