Latvia may occupy a large territory, but its population of 1.7 million would fit into a small corner of London, and its road to independence has been long and hard. It endured centuries of Swedish, Polish, and Russian rule, and when the Bolshevik revolution came the new state of Latvia became embroiled in civil strife which resolved itself into a dictatorship. That lasted until the Second World War turned the country into a battlefield, in whose organised savagery 200,000 Latvian citizens perished, including 75,000 Latvian Jews.

Today Latvia is seeking to project a new image. In 2014 its capital Riga, whose historic quarter has a gracefully Swedish air, was European Capital of Culture, and hosted the European Film Awards. But music – which had sustained the Latvian spirit through all the bad times – is the new image’s mainstay. Latvian law guarantees every citizen the right to music education, and everybody sings: the current minister of culture Nauris Puntulis is a tenor who once worked as a pop singer. Last time round, the five-yearly Latvian Song and Dance Festival drew 40,000 participants and half a million spectators.

And since every self-respecting capital has its own music festival, Riga has now acquired one too. Thus it is that I find myself lured to the seaside resort of Jurmala, where the inaugural Riga Jurmala Music festival is taking place over a succession of weekends. And you couldn’t wish for a starrier line-up: on the one hand the conductors Zubin Mehta, Gianandrea Noseda, Mikhail Pletnev, and Mariss Janssons (a native of Riga), and on the other, violinist Vadim Repin, cellist Misha Maisky, guitarist Milos, and pianists Yuja Wang and Jan Lisiecki. 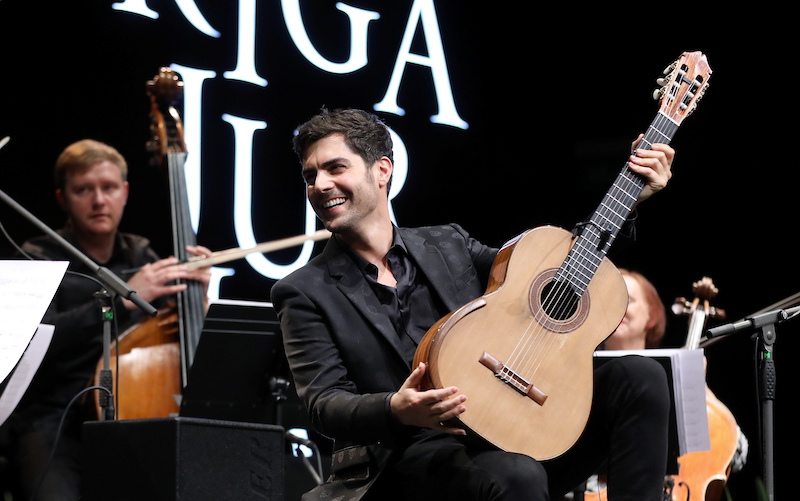 MILOS and soloists from Latvian National Orchestra at RJMF

And if you wonder how this galaxy of talent has been lured to such a modest spot, all becomes clear when you realise that the artistic director is Martin Engstroem, whose past work as artistic boss of Deutsche Grammophon, and founder of the Verbier Festival in the high Swiss Alps, has given him a hotline to all the world’s great musicians.

His own explanation for why he started Verbier was his desire to hold a resident party in a beautiful place, with music as the binding agent. The performers became addicted, and came back year after year, and so did the punters, who now feel they own the festival. Engstroem had spent his honeymoon in Riga back in 1978, and when the philanthropic Latvian RJMF foundation came knocking on his door he felt he couldn’t refuse the challenge. They wanted to establish a festival which would attract both tourists and young musical talent from all over the Baltics, and his specialism is precisely that. He has discovered through Verbier that if there are two things which are an irresistible draw, it’s stars, and youth. “Who’s coming up, who’s new. So that’s what I’m going to develop here,” he tells me.

Moreover, he wants to tap into what he regards as a growing trend among travelling music-lovers. ‘Increasing numbers of people are travelling to hear music – not only the rich and retired – just people who manage their time, which is the big issue nowadays. Where do we find time to do what we want to do? A music festival can be an incentive to go somewhere and settle for a few days. They might say OK, let’s go and listen to the LSO, or to the Israel Philharmonic. And the way we take holidays has changed. Not as a chunk of time in the summer, but in many short breaks.’ This is why the festival is taking place over a succession of weekends, rather than solid weeks.

I spend a fair amount of my weekend on the beach, a fifteen-kilometre stretch of pure white sand on which Russian families quietly promenade like characters in a period film. But events in the two auditoria – products of Soviet culture in its most civilised form – draw me irresistibly back to the music.

And the fare is indeed first-rate. Accompanied on the piano by his daughter Lily (whose page-turner is her half-brother Maxim), the charismatic Mischa Maisky gives a lovely recital, and follows it up with a rare performance of Saint-Saens’ cello concerto; the Maltese tenor Joseph Calleja being suddenly indisposed, Russian soprano Olga Peretyatko stands in with a haunting programme of Rachmaninov songs; supported by the British pianist Simon Lepper the German baritone Benjamin Appl – a new star in the firmament – turns his programme of songs by German and British composers into a meditation on the concept of Heimat – an untranslatable German word denoting ‘home’ in its broadest sense.

But the outstanding event of the weekend is the recital – backed up by instrumentalists from the Latvian National Symphony Orchestra – by the Montenegrin guitarist Milos, whose refined musicality is second to none. In the course of this recital, he explains that he’s borrowed the title of Paul Simon’s  Sound of Silence for the CD which he’s bringing out on Decca Classics in September. And as he tells me afterwards, that title coveys a world of meaning, both for him and – he hopes – for his audience.

The new CD, he says, is not only a journey to different parts of the musical world. “It’s also a very personal repertoire which meant a lot to me at a time when I was recovering from my injury.” And in describing that injury and its aftermath, he chooses his words with the same fastidious care he brings to his playing. “I was playing many concerts, and my hands were starting to hurt – and I didn’t know what it was.” RSI? “Yes, that’s how it started, but then it spiralled into many other issues. And I completely lost the ability to play. I couldn’t even hold a glass, or button my shirt, or brush my teeth. I went to a lot of doctors and saw a lot of specialists, and some of them gave me a devastating prognosis – that I would not recover, and would never play again. That gave me huge psychological strain. It was heart breaking.”

“But though it was a very hard time for me professionally, it was also a very creative time, because I found different ways to be creative. I opened myself to different art forms outside my own.” He had at first tried to play through the problem, thinking hard work would cure it. “But the moment I stopped doing that, and accepted that something needed to change in how I lived my life, that was when my real healing began. I learned who I am, and what kind of music I wanted to make.

Making his new album he felt like a kid in a candy shop. “I gave myself the freedom to choose from so many different kinds of music, and to work with arrangers whose work I admired. I could live through my wildest musical fantasies. So we have a song by Radiohead alongside music by Tarrega and De Falla. I was able to show that music is one big thing, a universal expression. I could create a bridge and forge all this music into one.”

Crossover, he says, is often regarded as a dirty word. “But for me it has a good meaning. The guitar is the most versatile classical instrument, and it can cross over genres without any explanation being needed. And if you take that one step further, and look at music as one universal idea, and put the guitar in the middle of it, then you can cross over by bringing your classical qualities, your craft and your finesse, and applying them to music – say, a Beatles song – which can have a massive emotional effect on a huge number of people. This kind of crossover can draw people to classical music who wouldn’t otherwise go near it. This can create new audiences.”

In Leicester on September 21st he will embark on a tour which will take this message to twenty British cities.