The new-music glitterati have gathered, and the claque are in full voice for Nigel Lowery’s new production of Gerald Barry’s The Intelligence Park in the Linbury Theatre. For those unfamiliar with Barry’s fashionably off-the-wall musical style, this work, which launched his career in 1990, is a suitable place to start. As a programme essay warns listeners, the familiar ground of rhythm, phrasing, and harmony has gone out of the window, leaving a tonality which is “cracked, besmirched, degraded, and ambiguous”; the vocal style flies in the face of all expectation.

Vincent Deane’s libretto offers a convoluted plot concerning a composer (Paradies) in 18th century Dublin whose creativity is blocked, and whose picaresque travails involve a castrato (Serafino) plus a gallery of local characters supported by rows of stuffed dummies. Barry himself has said that he has “no fixed ideas” as to what the opera is about. 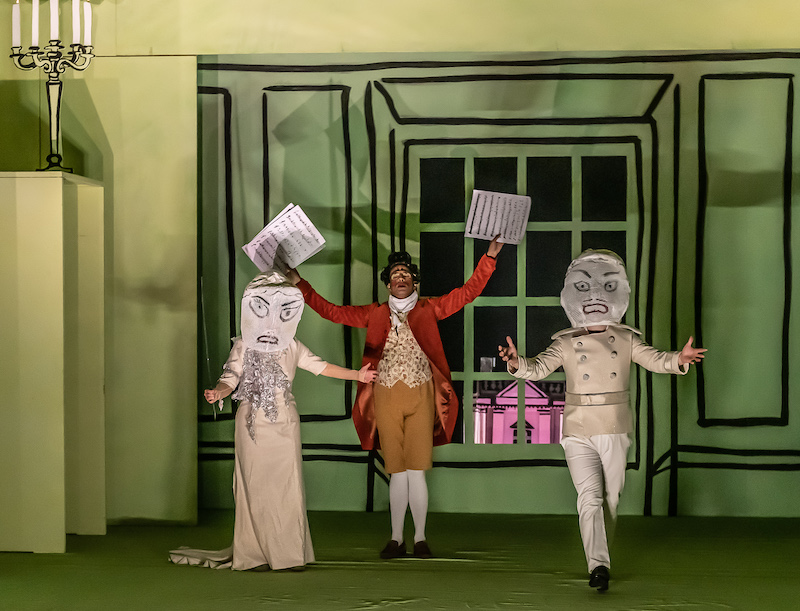 When the lights go up on Lowery’s Hogarthian neo-Hockney set and the characters begin to sing, it feels at first like Stravinsky’s Rake’s Progress supercharged into a fifth dimension, but we’re soon swinging free of any such cosy references. The vocal lines stop and start unexpectedly, and scamper up and down the register from stratospherically high to low and back again; the countertenor switches into and out of basso profundo in mid-phrase. The orchestra – the London Sinfonietta under Jessica Cottis’s direction – sets up a raucously hammering fortissimo which continues relentlessly until a muted chorale provides aural relief. Barry’s intricate scoring whirls along with exultantly unfettered energy, while the singers – all got up as painted caricatures – cavort, fight, and copulate with brilliantly choreographed comic precision. Special plaudits to Michel de Souza (Paradies), Stephen Richardson (Sir Joshua Cramer), and Patrick Terry (Serafino).

Initially I’m entranced by the visual invention and organised anarchy of it all, but long before the end – and it’s a long evening – I’m dying to escape. Like Barry, I have no idea what the piece is about, and frankly I couldn’t care less. Stravinsky’s Rake is shot through with intense humanity; Barry’s work is a farrago of frivolities, flippant to the core.

The worst thing about this show is Deane’s libretto, which ought to have been an essential adjunct, given that scarcely a word is comprehensible thanks to the sense-mangling vocal lines. But God help us, it’s the most pretentiously verbose Irish whimsy, and what’s interesting is how little faith the director seems to have in it; the surtitles are almost on the ceiling, and from some seats are extremely hard to read. It’s significant that most of the audience, most of the time, don’t even bother to look skywards. Of course they all cheer wildly when it’s over: this is a first-night audience, packed with friends and supporters.