While English National Opera, under its current leadership, produces nothing but flops, the Royal Opera remains splendidly on track. Hot on the heels of David McVicar’s scintillating take on Britten’s Death in Venice comes the first revival of Keith Warner’s darkly haunting production of Verdi’s Otello, now properly bedded in.

Boris Kudlička’s abstract monochrome set – two towering walls pointing inwards, with moving screens suggesting Moorish latticing – underlines Otello’s descent into darkness. There are just brief moments – in the Venetian Great Hall, in the springtime chorus, and for Desdemona’s murder which takes place on a brightly lit bed – when the stage is suffused with colour. This visual restraint focuses the action and forces us to look inward; Otello makes his entry into full-blown paranoia cowering at the bottom of an inky-black box. The Cypriot crowd are directed with masterly assurance, and if too much reliance is placed on clouds of smoke, that does intensify the chiaroscuro quality which lighting-director Bruno Poet brings to Warner’s dramatic world.

There are moments when this director allows himself licence to play Regietheater games: Iago appearing centre-stage with a cackling laugh before the storm in the opening scene; a crudely-sprayed graffiti phrase making a pointless contemporary reference as Otello loses his last shreds of sanity; a garish piece of sub-surrealist sculpture behind Desdemona’s bed. These interpolations in no way enhance the otherwise convincing naturalism of the action, and could all be profitably excised. 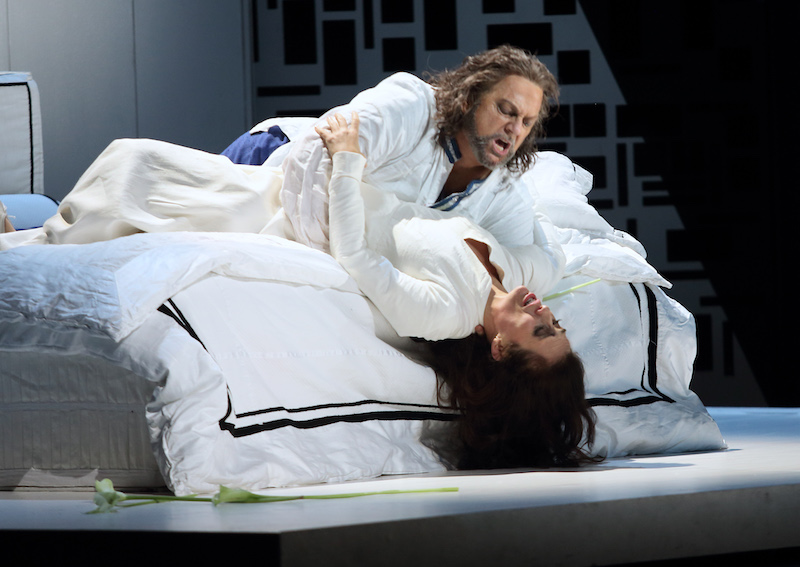 There are no weak links among the principals – Freddie de Tommaso’s Cassio and Catherine Carby’s Emilia are vividly imagined creations – but this evening belongs to three outstanding performers: Carlos Alvarez as Iago, Gregory Kunde as Otello, and above all Ermonela Jaho as Desdemona. With the whiff of cordite in his tone as he announces his nihilist credo, Alvarez makes the ideal Iago, and he toys with his victims like a cat with mice. Kunde may not have the vocal gorgeousness of Jonas Kaufmann, who sang in this production’s premiere, but he makes up for it with acting of a white-hot intensity: it’s impossible not to be moved as he desperately tries to convince himself of Desdemona’s faithfulness. The final scene has the quality of a small-town tragedy, a love affair gone tragically wrong, as he hesitates with his sword, passionately kisses his wife before brutally killing her, and collapses in grief when the truth is revealed.

Jaho recently described Desdemona to me as ‘a strong woman with a sweet soul who dies for love’, and that is exactly how she incarnates her – a radically new interpretation of this traditional victim role. Her first-act scene with Otello is a duet between equals, and as he begins to rough-house her when his suspicions take root, her response is impatient anger rather than plaintiveness. Her leave-taking of Emilia, her Willow Song, and her final prayer are mesmerising in their beauty and pathos. And her sound is glorious throughout, with soaring grace and a sublime ethereality. This is a performance in a thousand.

The other heroes of the evening are Antonio Pappano and the Royal Opera House orchestra, who bring out every instrumental nuance in this towering work. I’ve never heard the cellos sound so beguiling in the love duet, nor the violins so honeyed and sinister as they abet Iago’s pouring of poison into hapless Otello’s ear.