On comes Russian pianist Alexander Melnikov, looking questioning and quizzical; on saunters American soprano Claron McFadden with the rolling gait of a sailor, and shoos him back offstage. Now in possession of the space, she proceeds to fill it with a non-stop barrage of squeaks, growls, warbles, whines, and shrieks, occasionally interpolating a snatch of jazz or a hint of coloratura. This is John Cage’s Aria, a virtuoso exploration of the human voice, and an imitation of speech with all sense removed. It’s scored with swoops, blobs, and squiggles which are designed to evoke effects which would normally be considered non-musical. 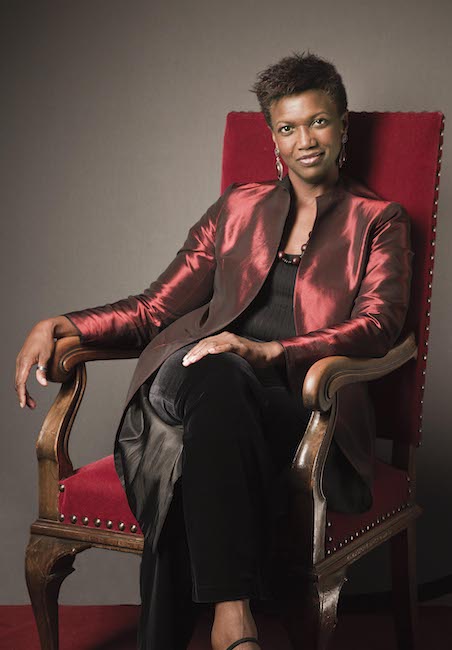 With Melnikov back on stage, McFadden now launches into Prokofiev’s Five Melodies, for voice and piano: no words again, but this time an eloquent and elegant series of vocalises – one simply hummed – which are mightily expressive.

Then, with Melnikov banished once more, McFadden gives us Stripsody by Cathy Berberian, the extraordinary singer for whom Cage’s piece had been written, and now McFadden’s on speed: beginning with a breast-beating Tarzan imitation, then mimicking every kind of human and animal communication with Batman noises – ZONG! SBROOM! BLAM! – thrown in. The score for this piece, we are told, is not notes on a stave but strip-cartoon doodles, yet the piece has a clear structure.

With Oliver Knussen’s Whitman Settings, singer and pianist settle into a more conventional mode, the poetry’s spectral grace intensified by the delicate precision of the music, after which McFadden lets rip again with Luciano Berio’s Sequenza III, a vocal extravaganza written for his wife Cathy Berberian and as McFadden sings it gloriously off-the-wall, although it’s meticulously scored.

Since Melnikov is one of the most interesting and original pianists on the circuit, it’s a pleasure to hear him briefly play solo (with a Schnittke jeu d’esprit), after which McFadden delivers a piece which must have been profoundly shocking when Erwin Schulhoff – an anarchic Jewish Communist who perished in Nazi captivity – composed it. Alas, Sonata Erotica is the vocalisation of a female orgasm – nudge-nudge, wink-wink – which has now dated beyond redemption.

The final work in this exhilaratingly unorthodox programme is also the most remarkable: George Crumb’s Apparition is another Whitman setting, this time delivered by a soprano plus a pianist with one hand on the keyboard and the other hand inside its belly, stroking and scratching the strings. Never have I heard a piano sound so ghostly, nor so beguiling; the human voice is its accompaniment, rather than vice versa. The piece seems to be continually drifting towards silence but taking a long time to get there, and the effect is breathtakingly beautiful.

Then comes the encore: Rachmaninov’s shortest and most passionate song, with the performers unchained and full-on at last.