It gives me no pleasure to report that English National Opera, which last year produced a record number of turkeys, has kicked off this year with yet another one. The current ENO administration, who have perversely gone out of their way to alienate the critics, may interpret my judgement as a tit-for-tat, but it isn’t that: I am just sad that the artistic policy of our second most important opera house should have resulted in such a catalogue of failures.

And the tragedy of Barbora Horakova’s production of Verdi’s Luisa Miller is that the singing and playing is the best we have heard at the Coliseum for a very long time. There’s no weak link among the singers who contend heroically with the physical obstacles put in their path, while the orchestra under Alexander Joel’s direction brings out all the splendour of Verdi’s score.

As Horakova explains in a programme-interview, she wants to highlight the ways in which this is a psychological drama, both in terms of the characters’ personal development, and in terms of the mood of the populace in the 17th century Tyrolean village where the action is set. Schiller’s play, on which the opera is based, is a straightforward tragedy of corrupt rule and thwarted love; so is Verdi’s work, but Horakova finds ways to subvert it from the start. 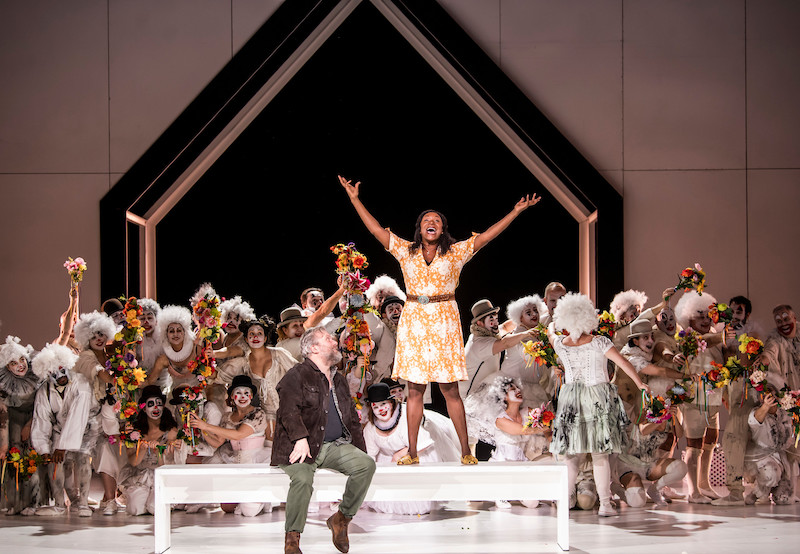 The little boy and girl who daub the set with graffiti during the overture are supposed to represent the protagonists’ childhood crush: this may now be a directorial cliché, but it’s not inappropriate. On the other hand, the irruption of the chorus kitted out as a balloon-toting carnival crowd in Barcelona completely obliterates the main action from the start. There’s no sense of time or place here, and, more seriously, no impression given that the five main characters form part of a coherent society: the way they are dressed and act, they might have just landed from five different planets. The set designs are scarcely worthy of the name: white screens bearing incomprehensible graffiti which are endlessly shuffled about, and folk-carnival elements bolted onto a cumbersome and pointless pentagonal framework.

Horakova is clearly obsessed with her notion that Wurm – the villain of the piece – is the embodiment of metaphysical Evil; embodied by Soloman Howard as a narcissistic catwalk hunk, he’s a lurking presence in almost every scene, thus making nonsense of the plot. And with Horakova there’s nonsense galore, with the movement direction clumsy and counter-intuitive, and the children and balloon-toting clowns tiresomely omnipresent. Since the text constantly comments on the beauty of the natural scenery – mountains, forests, sunlight – the only sensible response to what passes before our eyes is to close them, and to imagine the scene for ourselves. When Horakova comes on to accept her plaudits, the temperature in the house drops like a stone.

So why three stars? Quite simply for the singers. No praise too high for Olafur Sigurdarson’s Miller, James Creswell’s Walter, and Christine Rice’s Federica. Howard’s sound as Wurm is gloriously projected. David Junghoon Kim’s Rodolfo has wonderful bel-canto grace, while in Elizabeth Llewellyn we get a gorgeously-sung Luisa. They all deserve so much better from the house that has hired them.