On paper, director Tobias Kratzer’s rationale for his production of Beethoven’s Fidelio made persuasive sense. He started from the premise that Beethoven set his story in Spain because the censors would have spiked it if he’d set it where it belonged, in Revolutionary France; Kratzer’s production is accordingly placed in the last days of the Terror of 1794. There would be updating, but not in the first act, which would take place under the banner of the Tricolour symbolising the people’s hopes. Pizarro – the evil governor – would be a Robespierre figure; his opponent Florestan would be a Danton.

Act Two would, on the other hand, have a Brechtian timelessness, allowing Beethoven’s ideas of political freedom to take flight. Heroine Leonore’s example would be a call for public altruism; the passive reactions to the drama by the chorus, symbolising us, would be shown projected onto the backdrop. The merciful deus ex machina at the end would not be played by a higher state authority, but collectively by the chorus itself. The dialogue at the liberating close would include quotes from the playwrights Georg Büchner and Franz Grillparzer, both near-contemporaries of Beethoven. It all sounded very neat. 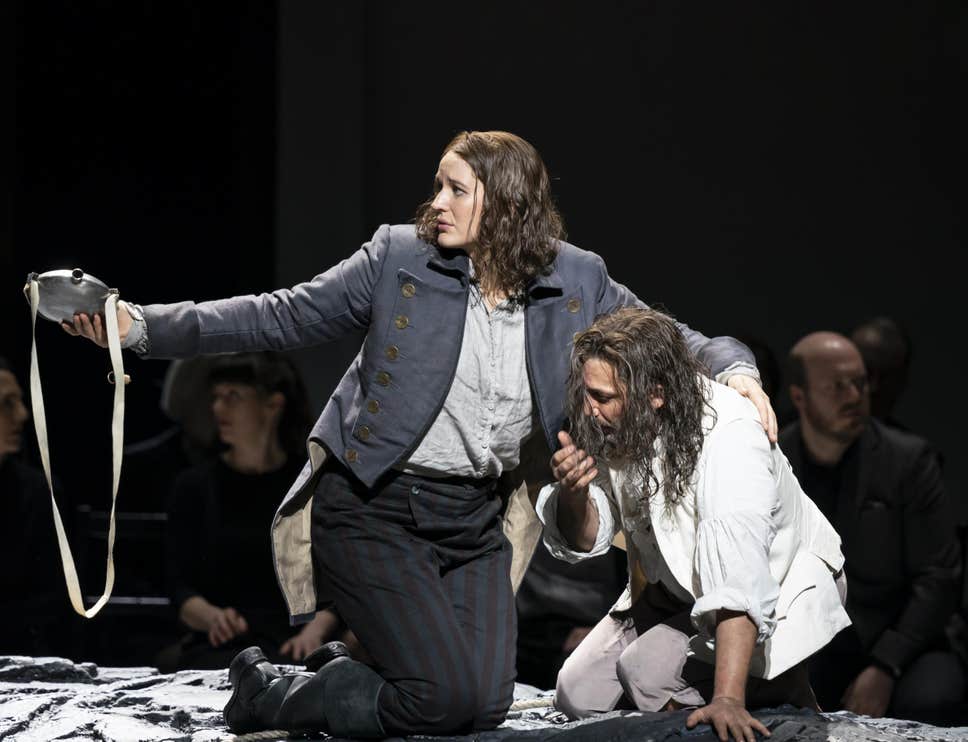 We are warned before the curtain rises that Jonas Kaufmann – whose presence as the embattled hero Florestan packed the house months ago, and has brought a shoal of giant Rollses to the door – is under the weather and craves our indulgence, but as he doesn’t appear in the first act, and as his part in the second is a small one, that’s no great problem. Excellently sung and acted, and presented in period costume with painterly chiaroscuro sets by Rainer Sellmaier, the act establishes a suitably dark and melodramatic world. The sub-plot is finely sung by Amanda Forsythe and Robin Tritschler as the ill-assorted couple Marzelline and Jaquino; Georg Zeppenfeld, as Rocco, makes a bombastic but benign gaoler; as ‘Fidelio’ – Leonore disguised as a man – the Norwegian soprano Lise Davidsen sings with the serene power and authority we have come to expect of her. The great Quartet, in which the four main characters sing in perfect harmony while their individual lines are at furious cross-purposes, is, as it should be, the musical high point.

Meanwhile the prisoners’ hesitant emergence into the sunlight is beautifully done. There is one mysterious directorial insertion into the plot, when Marzelline is allowed to observe (and react hysterically to) Leonore’s revelatory disrobing, thus being made privy to her secret; this sabotages Leonore’s most beautiful aria.

Then, alas, comes Act Two, in which things fall apart. Florestan, supposedly in his subterranean dungeon, becomes a ragged figure tethered on top of a mound of mud, and is surrounded by a dark-suited crowd seated in a semi-circle as in a closed-sect prayer-meeting; above them is a giant screen on which their faces remain projected throughout the act. The most important moment in Kaufmann’s role is his cry – on one single long-drawn-out note at the outset – followed by a few anguished lines about the hopelessness of his plight. This should be a great dramatic moment, but Kaufmann – presumably egged on by Kratzer – turns it into a “performance” which is irritatingly self-regarding rather than honestly dramatic. Then Rocco and Leonore start to dig half-heartedly, singing of the person supposedly in a dungeon below, while that person is actually lying prone beside them. Nothing adds up; all the elements of the staging – some naturalistic, others stylised – are at odds with each other.

And so on, and so on, until we come to the expected sanguinary climax where Pizarro’s knife is held to Florestan’s throat. About to strike, he is felled by a perfectly-synchronised pistol shot – Bam! – from a now-radicalised Marzelline who appears in a doorway, just by chance in the nick of time. I’m sure we’re not supposed to laugh, but we do. Thereafter it’s all downhill, with poor Davidsen having to struggle out of her trousers while attempting to join in the ecstatic closing chorus.

As they say in football, a game of two halves. Davidsen’s applause brings the house down, Kaufmann’s is tepid, Kratzer’s is best described as an expression of severely modified rapture.