George Orwell’s 1984 did what no other novel had done before: it predicted the shape of the political world to come. The embodiment of its predictions may have been a bit late in arriving, but Big Brother accurately adumbrated the surveillance states we now see in China and increasing parts of the West, while Russia now embodies Orwell’s state where the populace can be made to unanimously reverse their political loyalties at the flick of a switch.

The Handmaid’s Tale is now joining 1984 as a disturbingly convincing prophesy. Margaret Atwood’s classic novel was published 37 years ago, but it’s got into the West’s cultural bloodstream thanks to a variety of factors including films, stagings round the globe, a long-running TV adaptation, and the much-revived operatic version by the Danish composer Poul Ruders. Meanwhile even the victims’ veiled uniform has caught on, with feminist groups now holding ‘handmaid parties’. 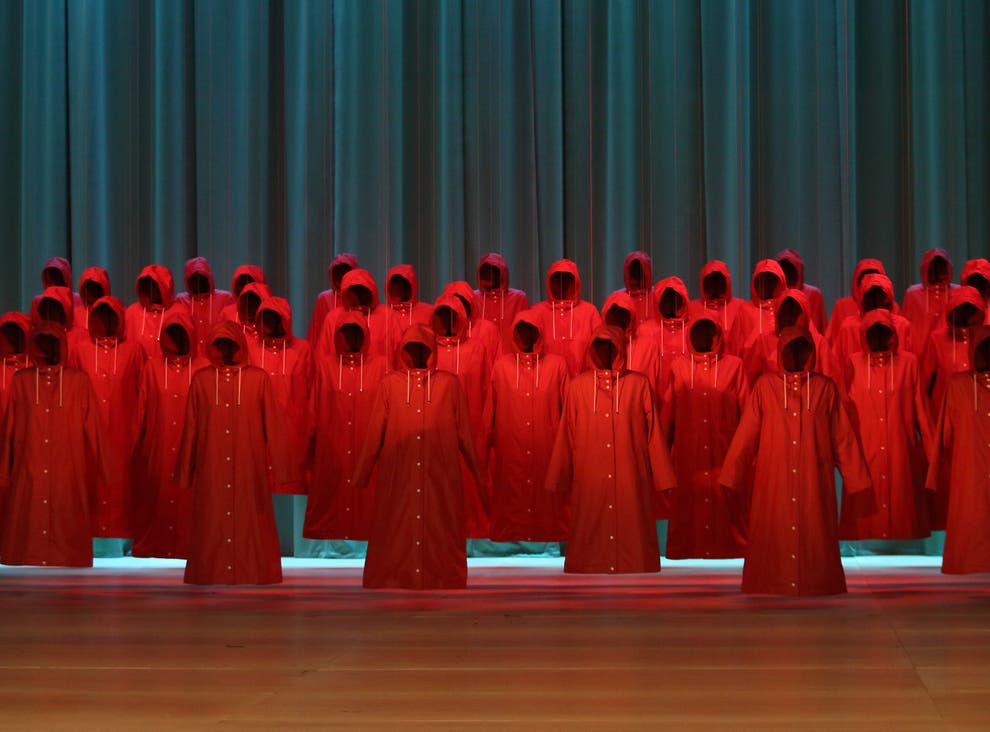 English National Opera’s artistic director Annilese Miskimmon, who has now redirected ENO’s original version of Ruders’s work, itemises the stomach-turning ways in which the real world has caught up with Atwood’s baleful fantasy.

Atwood, she points out, didn’t invent the sexual oppression in her story: she researched centuries of female oppression by patriarchal theocracies in which religion has been used as a weapon for social control. Climate change and the assassination of democratically elected lawmakers are what spark the drama, but Miskimmon’s production focuses on Atwood’s central prediction – that basic human rights are set to be systematically denied to half the human race. We don’t have to look far to find current examples – viz the Taliban’s trashing of women’s rights in Afghanistan, and moves to outlaw abortion in the American South. Miskimmon’s feminist zeal has been sharpened by her own background in the semi-theocracy of Northern Ireland’s politics.

Atwood’s big idea may be futuristic, but Ruders and his librettist Paul Bentley present the action as a gigantic flash-back, framed by an academic symposium on the misogynistic prison-state of Gilead. Offred, the central character, has seen her husband and daughter snatched away, and has been taken prisoner; what now happens to her serves to expose the horror and corruption of this state in which the only function allowed to women is procreation.

We first encounter the assembled handmaidens as they are drilled and humiliated by a Nazi-style “Aunt”, and we watch them singing a zombie-like chant in praise of their conditions. Shades of the Uyghurs in their “re-education” camps? Certainly, but some of the scenes, as the evening develops, are more redolent of the atrocities we now see nightly from Ukraine. Indeed, the concept on which the work is posited could be an emanation from Putin’s deranged brain.

The plot is packed with incident, but certain scenes stand out, notably two hangings, a group murder, and some grotesquely ritualised rapes. Miskimmon’s Gilead is all about stylised ritual, and it says a lot for her stagecraft that she can make us believe in this creepy alternative world, and in the desperate efforts by Offred and fellow-victims to escape from it. Thanks to Annemarie Woods’s designs, Imogen Knight’s movement direction, and Paule Constable’s lighting, this is a supremely elegant production.

But this is not a political tract. It’s an opera, and judged as such, it’s less than a perfect triumph. The libretto veers between stylised Gilead-speak and naturalism, but, with a peppering of mock profundities and casual jokes, Bentley clearly didn’t know when to stop bunging things in. Most of the characters are stereotypes.

Conducted by Joanna Carneiro, the music suggests that Ruders has marinated his mind both in Schoenberg and in the film music of Bernard Herrman. Much laced with brass and percussion, the effects are often spare and graceful, and the references work well, notably the repeating of ‘Amazing grace’ as a leitmotiv. The problem with the score lies in its endless see-saw between lyrical tonality, and hard-line atonality which gets on one’s nerves to no discernible purpose.

With the chorus in fine form, the cast perform heroically, notably Susan Bickley as Offred’s mother, Emma Bell as the Aunt, Pumeza Matshikisa as a rebel handmaid, and Robert Hayward as the sexually predatory Commander. Kate Lindsay’s Offred is a brilliantly sustained characterisation, holding the evening together with a pure tone and commanding presence.

All in all, this is a brilliant communal achievement, showing off ENO at its best, and cheered to the rafters by its first night audience. It’s a shocking waste of money and effort that there should only be four more performances to come.

But there’s a cold and calculating cleverness at its core, and hysteria is its relentless keynote: I would never choose to spend an evening with it again. Could any composer create a version of this moral fable which could draw audiences back through sheer operatic power? This is a moot point. Could a satisfactorily realistic opera be created out of the story of Isis? Or would that also be, quite simply, too repellent for some people to stomach? Discuss.