The Barbican is building a series of concerts round the young Russian pianist Daniil Trifonov, and his talent deserves the accolade. For his first outing he chose to play Ravel’s sparkling G major piano concerto, and spun a fine haze of notes in the introduction before settling into the jazz-inflected Gershwinesque main theme with laid-back authority. The first movement was airborne, the harp providing a golden dusting of sound to complement the piano’s clouds of trills, with the LSO supporting the effects with violin glissandi and wood-wind wah-wahs. 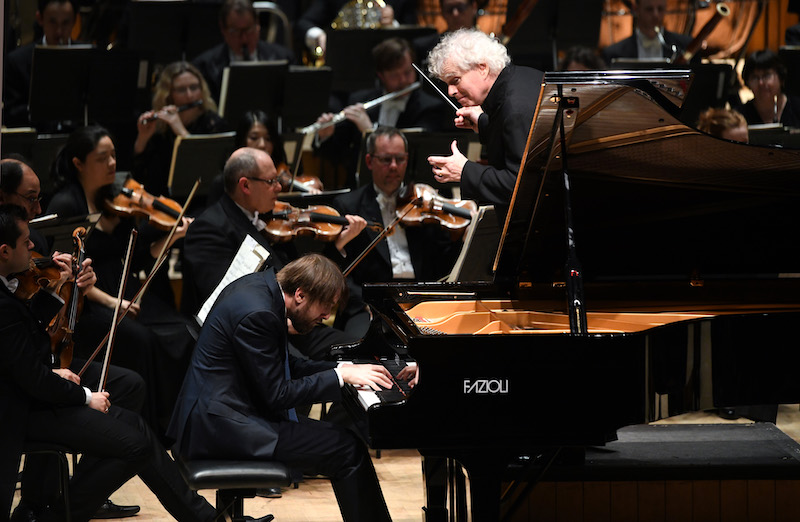 I’ve always had a problem with the Adagio of this concerto. Some critics find classical serenity in its ruminative trajectory, but I just sense hard slog: Ravel apparently struggled with it one bar at a time, and that’s how it comes over, as a wayward and not particularly pleasing product of the intellect, rather than an effusion of instinct. Trifonov maintained a seraphic smile throughout, however, so he at least was a believer. As the live-wire powerhouse in the finale, he was in his element, carrying Rattle and the orchestra along with him in exuberant overdrive.

But then, alas, came his encore. Year after year he chooses works of his own composition to round off a performance, and year after year he dissipates his own magic with them. This time it was his transcription of Rachmaninov’s Silver Bells, which seemed to ramble aimlessly. Trifonov may be a wonderful pianist, but he’s not – or at least, not yet – a composer, or even a good arranger. Somebody should take him aside and point this out.

Showcasing the versatility of the LSO, the rest of this evening was pure pleasure. It began with a sparky little suite dedicated to Rattle – when still in his Berlin Phil incarnation – by the Parisian composer Betsy Jolas; that sprightly 93-year-old hopped up onto the podium to acknowledge the applause. Then came two classics: Poulenc’s Les biches, evoking the sunlit, high-stepping Parisian Twenties, followed by Ravel’s La valse, which satanically reflected the era’s dark underside.

Edited to correct the identity of the piece in the encore.