If the music of Thomas Larcher reflects conflicting impulses at a very deep level, it also reflects the triumphant resolution of those conflicts.

He’s a virtuoso concert pianist who perennially wants to escape from the repertory of his instrument, and also from its sound in its ‘natural’ state; most piano recitals, he has said, are ‘little more than geriatric museum tours by candlelight’. It was typical that his dazzling Bose Zellen – for prepared piano and orchestra – should have resulted from a commission to write a concerto with exactly the same instrumentation as Mozart’s K 482: Larcher’s response, which opens with the piano creating a ghostly wah-wah before going on to deliver other effects undreamed-of by Mozartians, has a similar lucidity of structure.

Another inbuilt conflict lies even deeper. Larcher’s restless exploration of new textures and forms is driven by his feeling of having been trapped in what he calls the compositional ‘clichés’ he has created for himself. As a composer, he is a child of the post-serialism generation, though he never felt the urge to rebel against the Darmstadt orthodoxy. There are moments in his music when clear echoes of Bartok ring out, but it is much more akin to that of the anarchic John Cage, to the meditativeness of Toru Takemitsu, to Morton Feldman’s subtle interplay between sound and silence, and to Arvo Part’s tintinnabular mode. Larcher’s early immersion in the sonatas of Beethoven has left its mark in the care and clarity with which he lays out each work’s musical structure; his teenage love of jazz also feeds into the mix.

At once enigmatic and structurally crystal-clear, Larcher’s works are short, condensed, and accessibly tonal; they induce some critics to draw analogies with theatre, others with cinema, and yet others with the plastic arts. His music demands extreme virtuosity, and possesses a watchmaker’s precision, yet it’s very instinctive, very emotional. In its reliance on biting dissonances, cinematic cross-cuts, and startling shifts in volume, timbre and tone, it has a quicksilver quality; these qualities are all reflected in his third string quartet, Madhares, whose title refers to the White Mountains of Crete.

This work’s first movement suggests an intensely bleached whiteness, as the first violin moves in high arcs over a soft susurration which feels unpitched; its second movement, entitled ‘Honey from Anapolis’, is an exquisite essay in gracefully rocking fifths and sixths. In the next movement, ‘Sleepless 1’, the players are instructed to play by themselves, each obeying their own instincts. Yet the playing is not improvised – it’s precisely notated – resulting in a freewheeling communal momentum with isolated stressed notes surging out like signposts. At one moment the higher instruments are diving down glissando in perfectly-controlled formation, then the atmosphere abruptly changes and they sound like a flock of angry birds. A madly driving velocity is intermittently the goal, but the switchback ride from one musical world to another keeps the listener in a constant state of pleasurable suspense. The mysterious white-note folk melody with which the quartet ends both grounds it and leaves questions tantalisingly in the air. 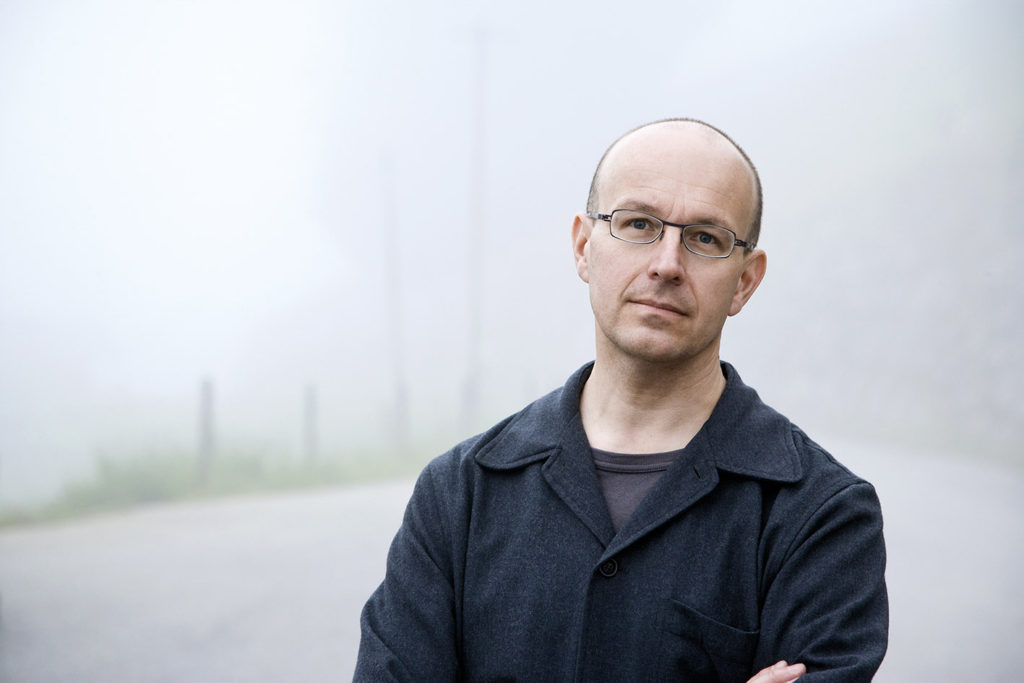 The non-musical inspirations for Larcher’s works are many and varied. Mumien – ‘Mummies’ – exudes a dessicated, hemmed-in energy with no possibility of release. A slow-motion video of Ayrton Senna’s fatal car crash prompted the structure and texture of Larcher’s cello solo Vier Seiten, with the chaotically-flying elements resolving into a shocked, paralysed silence. Photo-reportage from psychiatric hospitals furnished the vestigial texts for the song cycle My Illness Is the Medicine I Need, which inverts the usual recital convention by giving the soprano voice a muted pallor, and all the expressiveness to the accompanying instruments. Each song is a snapshot of drugged and unbearable reality, but some take us by surprise through their soaring beauty.

Larcher’s musical language is unmistakably his own, with certain devices cropping up in piece after piece like trade-marks. One of the most prominent of these is the cello pedal-note – sometimes a repeated pizzicato, sometimes a sustained note reminiscent of the Byzantine ison. Another favourite device is the triad, sometimes used as the basis for a sorrowing chromatic lament, at others constituting an island of tonic stability in a rough sea of swirling figurations. Meanwhile Larcher’s interest in ambiguity of pitch leads him, in his string quartet Ixxu for example, to have three instruments playing on three notes divided by two semitones: this, plus some exceptionally fast chromatic passages where the pitch becomes a blur, creates a special kind of timbral roughness. Larcher can also generate spells, as in the breath-taking opening of his Concerto for violin and orchestra: here the soloist plays a single triad in floating weightless arpeggios, creating a staircase down which the muted glockenspiel, followed by other instruments, gently descends. Like many of Larcher’s pieces, this movement comes in from a pianissimo distance, and finally disappears back into it.

Larcher has a perennial interest in non-Western instruments, and much of the time he treats the violin in the folk manner, but one instrument which can inspire him to Schubertian beauty is the viola. Meanwhile the piano, often ‘prepared’ in the John Cage manner, is central to his work, and on it Larcher’s own technical ramifications can be highly original. In his chamber piece Antennen, he neither touches the keys nor presses the pedals: instead he rubs the piano strings with massage-balls and stones, and for the effects to work there needs to be rust on the strings. In his piano work What Becomes he applies to the strings a rock-climbing tool called a hexacentric, which will not, he assures other pianists, do any damage.

For Larcher is a rock-climber, and he likens this dangerous sport to playing the piano: ‘It’s about concentration, and doing the right thing at the right time.’ Moreover, echoes of this passion recur constantly in his commentaries on his music, most notably in his words about the involuted poems by Ingeborg Bachmann which were the inspiration for Die Nacht der Verlorenen: ‘Here I was encountering not polished surfaces but rough stones, on to which I could claw my way forward’. And the text to A Padmore Cycle, for tenor and orchestra, is a series of poems about the mountains of Larcher’s native Tyrol: in the British tenor Mark Padmore, Larcher says he has found a companion willing to join him in entering remote musical territory.

Indeed, the sound-world of that region is all-pervasive: ‘In certain valleys you are in an arena of sound, and I draw on this for my music. The cowbells, the rushing water, the cracking of a tree in the wind – and what’s between the sounds as well, the great silences. It may be a Romantic cliché to talk about the music of nature, but for me it’s nothing less than the truth.’