An opera house needs a story to launch the season, and ENO had three. First, their chief executive had suddenly announced her premature departure. Second, Aida would be the first chance for their born-again dedication to comprehensibility – diction coaches on hand like firefighters – to be tested; Latonia Moore, in the title role, had said these coaches were ’on our ass’, and she had doubts about singing it in English anyway. Third, director Phelim McDermott with his team of Improbables was in charge: could they repeat their visual magic with Akhnaten? 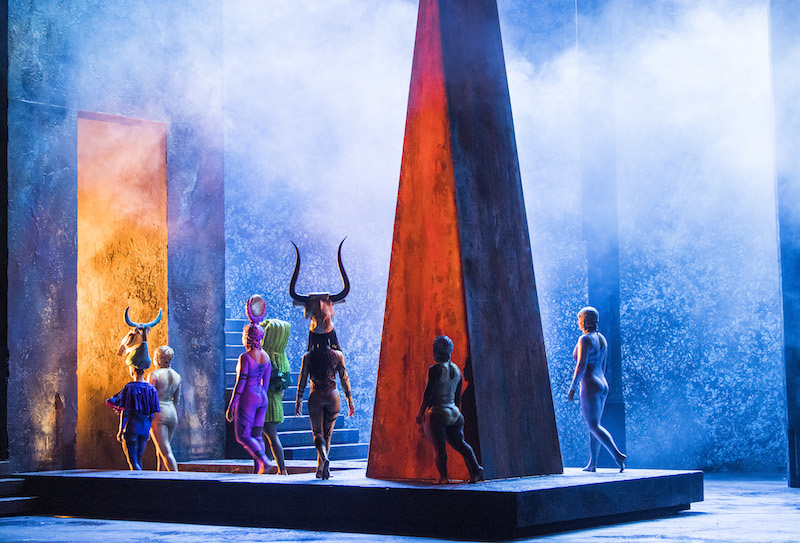 The first scene was not auspicious. Radames (Gwyn Hughes Jones in Ruritanian garb) faced Amneris (Michelle DeYoung in a shapeless mountain of white chiffon); both stood stiffly either side of a curiously ballooning gauze curtain, while her obtrusive vibrato and dutiful but strained diction was answered by his competent but effortful hymn to Aida. It felt like Gilbert & Sullivan until Latonia Moore came on to remind us what we had come to hear. Other roles were well sung, notably the King (Matthew Best), Ramfis (Brindley Sheratt), and the High Priestess (Eleanor Dennis), but what this black American soprano did was raise the whole event onto a different musical plane, with her flawless bel canto and lovely sense of line and phrasing.

But what McDermott delivered was am-dram. Every chorus and orchestral interlude was treated as an excuse to go for broke with a few standard effects – smoke, veils, tumbling, and wobbly human pyramids. Apart from an omnipresent physical pyramid there was no overarching visual concept, while the costumes suggested a democratic fancy-dress party where everyone had been instructed to do their own thing, with Middle-Eastern references. There were a few moments of haunting visual beauty, notably the pre-campaign temple ritual and the final scene (with the tomb looking like a Baghdad basement), but nowhere near enough. Under Keri-Lynn Wilson’s direction, the chorus and orchestra played a blinder.

The Barber of Seville, Coliseum

After launching their season with a woefully amateurish new Aida, English National Opera have wisely fallen back on their most dependable banker, Jonathan Miller’s production of The Barber of Seville. Now in its thirtieth year, this show has evergreen charm: if Covent Garden’s version of Rossini’s perfectly-constructed comedy is a quintessentially Gallic confection, Miller’s is its equally satisfying provincial-Italian counterpart. 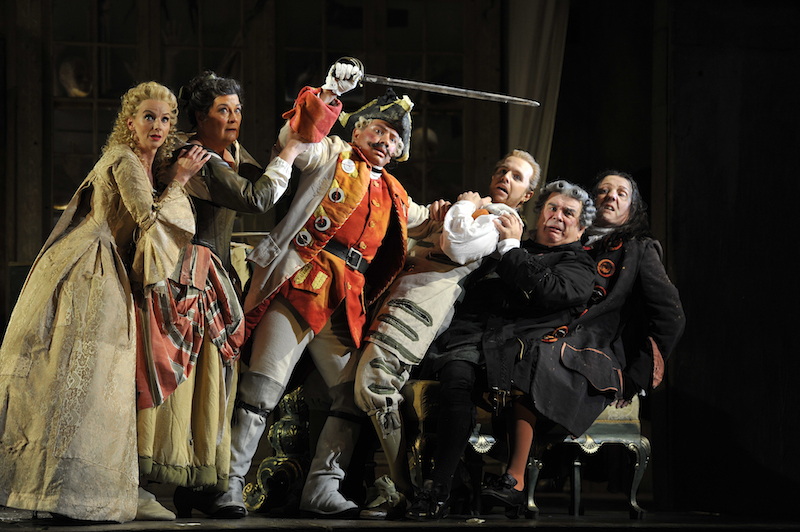 Miller’s trick has been to find a way to give the music’s comedy human shape. Rosina’s tyrannical guardian Dr Bartolo wants to marry her, but she falls in love with the handsome Count Almaviva who is (of course) disguised as a commoner; with the aid of ladders, clandestine letters, dropped handkerchiefs, and a blizzard of fake news, the resourceful Figaro helps young love to triumph. The movement style is pure commedia dell’arte, and the cast includes experienced farceurs led with blustering self-importance and perfect timing by Alan Opie (this production’s original Figaro) as Bartolo, and to thunderous effect by Alastair Miles as the turncoat Don Basilio; Yvonne Howard in the cameo role of Berta makes the most of her moment in the limelight. Presiding in the pit, Hilary Griffiths extracts an occasionally coarse-grained but always vivid performance from orchestra and chorus.

And the central trio play off each other brilliantly. Soprano Sarah Tynan is a Rosina with very sharp claws, whose impeccable coloratura gloriously fills the large auditorium. The Mexican tenor Eleazar Rodriguez, whose sweet tone is as malleable as his physique, makes an unusually interesting Almaviva. And in Morgan Pearse we get a commanding and mercurial Figaro whose delicate guitar accompaniment to the lovelorn hero’s serenade suggests he could make that his day-job if he chose.

A finely-judged and beautifully-designed ensemble production full of laughter and confident bel canto, with its much-loved director coming onstage at the end to take a diffident bow: this is why we should treasure ENO.

Sheku Kanneh-Mason’s career has been phenomenal. He started playing the cello at six, and passed Grade 8 at nine with the highest marks in Britain; he starred with his siblings on Britain’s Got Talent, and went on to become BBC Young Musician of the Year at sixteen. His appearance at this year’s Proms – he’d never been to a Prom before – was as soloist with the black and minority-ethnic Chineke Orchestra, with whom he played Dvorak’s Rondo and Popper’s Hungarian Rhapsody which, as he observes, ‘covers almost everything the cello can do’. 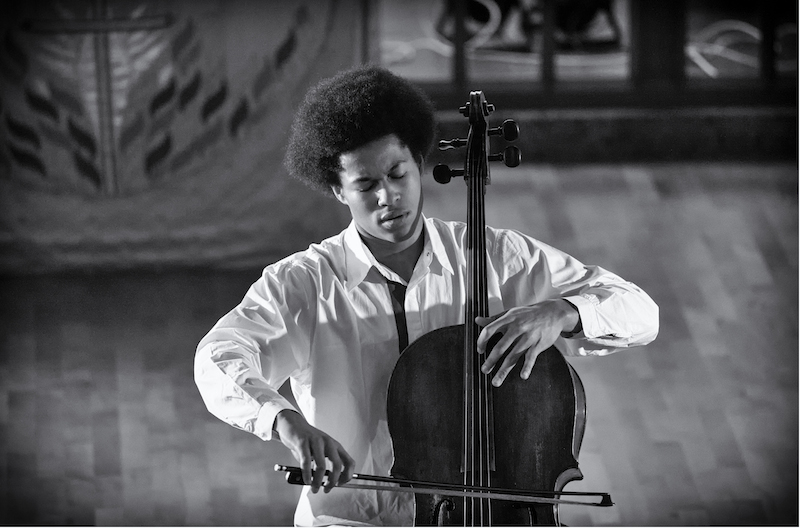 At King’s Place he was making his recital debut accompanied on the piano by his elder sister Isata – and there are five more gifted young Kanneh-Mason musicians waiting in the wings: quite a family.

The opening work, Gaspar Cassado’s Suite for Solo Cello, gave Sheku ample opportunity to display his technical prowess, his firm and authoritative sound conveying the measured gravity of the Bachian prelude-fantasia before exploding into a rapid sardana. If his intonation in the latter was at times just slightly off, that did not mar its convivial impetuosity; his ruminative pizzicato chords in the Intermezzo had a guitar-like mellow sweetness. In Beethoven’s Cello Sonata in G minor brother and sister played symbiotically, teasing out the alternating grandeur and pathos of the Adagio, giving the instrumental dialogue of the middle movement a powerful muscularity, and taking the false endings of the finale as an excuse for magisterial playfulness. Shostakovich’s Cello Sonata in D minor, in which the force of Sheku’s bow-strokes broke a string, showed us yet other facets of his technique – a yearningly elegiac tone in the Largo, and a whirling Dionysiac energy in the finale. A star duo in the making?

It speaks volumes about the health of classical music in London that the Wigmore should have been full for the second leg of the Mozart sonata cycle by violinist Isabelle Faust and pianist Alexander Melnikov. For although these are top-flight musicians, this was intimate stuff, music for connoisseurs. And the instruments themselves reinforced that intimacy: while Faust was using gut strings, Melnikov was officiating on a fortepiano.

Gut strings offer a quite different colour palette from that of modern strings, which are either made of steel or synthetic material. And the fortepiano is to a modern Steinway what candle-light is to neon: just as our eyes must get used to an infinitely softer light with candles, so our ears must attune themselves to an altogether subtler sound-world with an instrument of the kind Melnikov was playing – the replica of a fortepiano such as Mozart himself would have used.

What unites these versatile players – who regularly perform together – is a refined and unmannered musicianship which suits Mozart’s unassuming sonatas perfectly. There were occasional untidinesses in Melnikov’s playing – in music with so few notes, every single one counts – but Faust drew many kinds of beauty from the score. Mozart was literally creating an art-form as he went along, and this recital included the sonata whose deep pathos and tragic resonance set it apart from all the others, in E minor K 304. This had been composed in the wake of the composer’s mother’s sudden death while they were touring in Paris, and the second movement, with its sotto voce minuet theme and poignant key-changes, was the purest expression of grief. It’s a fair bet that no one in the audience had ever heard the prophetically minimal Adagio by Carl Maria von Weber which constituted the encore.

Amid the endless Aidas and Traviatas, it’s refreshing to come upon a Verdi opera which is almost unknown, as is the case with Les vêpres siciliennes. In Paris, where it premiered in 1855, this ambitious opera enjoyed a brief vogue before disappearing from the repertory; it was never staged in Britain until Covent Garden invited the Norwegian director Stefan Herheim to do so in 2013. Its historical basis in 13th century French-occupied Sicily was creatively doctored by its librettist Eugene Scribe to tread a careful path round Franco-Italian sensibilities, but the real attraction for its original audience lay in the staging, which Verdi had demanded should match his ‘grandiose, impassioned’ subject.

And in Herheim’s production staging is again the key, in that he and his designer Philip Fürhofer have set it in a stylised version of the opera house for which it was written. Moreover, while Scribe’s plot turns on the hostility between the victorious French and the vanquished Sicilians, Herheim has translated its political struggle into one in which art itself is the territory over which battle is raging. The oppressed Sicilians occupy the stage-within-a-stage, while their French oppressors occupy the balconies and boxes. While the overture plays we get a mimed sequence culminating in some quintessentially Weinsteinian sexual predation by the French Governor de Montfort (Michael Volle) with the girls of the Sicilian corps de ballet.

The action is driven by the moral dilemma of the Sicilian hero Henri whose devotion to his beloved Helene (Malin Byström) – and to the insurgent cause – is undercut by his horrified discovery that he is the illegitimate son of de Montfort; De Montfort’s anguished campaign to win his son’s love with political concessions becomes the opposite polarity of the story. Although the score has pre-echoes of Aida, La traviata, and Don Carlos, and although every bar of this long opera is dramatic, there are no hints of those operas’ moments of musical transcendence: the cast and chorus – and Maurizio Benini in the pit – have to work hard. If Erwin Schrott (as the patriot Procida) mangles his French, and if Byström lacks the technical ease required for her coloratura arias, tenor Bryan Hymel’s Henri is gorgeously sung, and Volle’s incarnation of the emotionally-tormented dictator is a tour de force.

But what carries the evening is the consistent beauty and brilliance of the staging. Herheim’s theatrical surprises come thick and fast, with the groups of singers and dances adroitly marshalled, and the stage-within-a-stage in constant motion; the masterly way in which Verdi’s music ratchets up the suspense is echoed by the illusion which Herheim creates, turning the whole world blood-red before it chillingly regains its ordinary colours as the climactic massacre takes place.