ENO had two fine house productions to choose between, for their revival of Britten’s A Midsummer Night’s Dream. They could have chosen Christopher Alden’s provocative version set in an all-boys school in the Fifties, in which Oberon and Tytania are teachers, the Mechanicals work on-site, and the lovers are sixth-formers, while the lusted-after Changeling Boy acquires an unsettling (and these days awkwardly topical) dimension. It was probably this latter element which persuaded ENO to play safe – or at least safer, given that Britten’s paedophilia can never be entirely glossed over – and go for the production by Robert Carsen, which is unalloyed fun from start to finish. 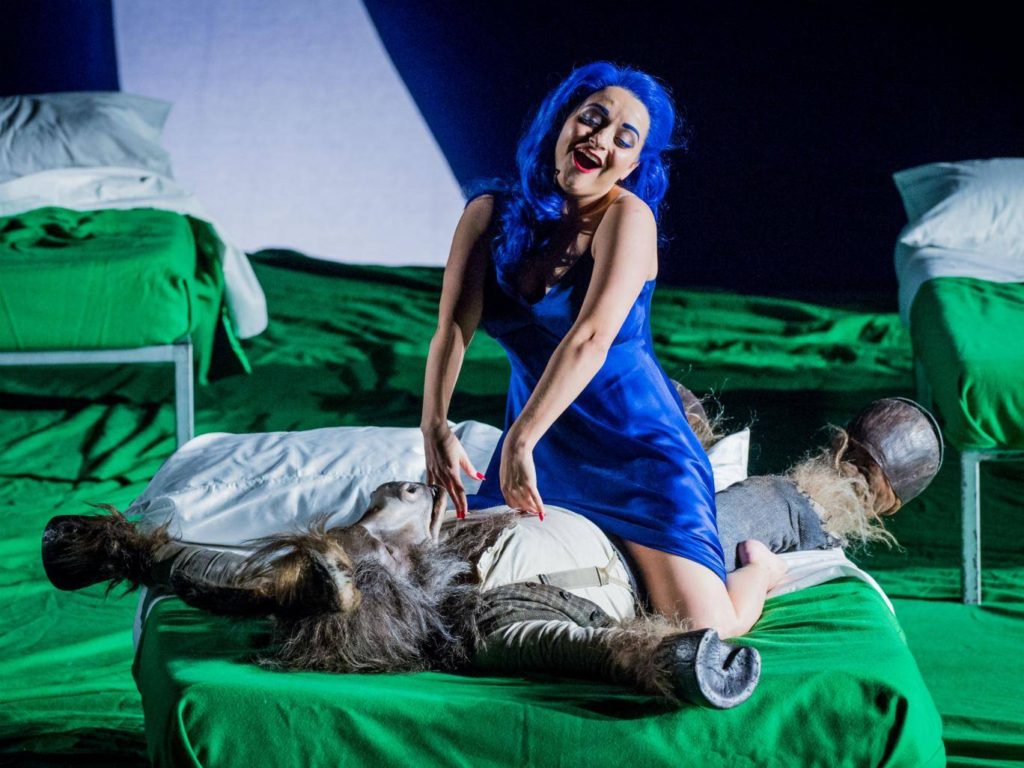 For this, Michael Levine has designed a world of morphing and flying double beds with green sheets, among which the characters get confused, then lost, then driven mad, before their eventual restoration to sanity. The treble fairies – clad in Hockney green-and-mauve, like everything else on stage – perform well-drilled tricks led by an indiarubber Puck (Miltos Yerolemu), a comic Caliban whose charisma powers the entire show. The tussle between Oberon and Tytania over the boy they both desire is largely played down; the particular strength of this production lies in the way the third act takes off into high fantasy, with the lighting becoming a virtuoso performance in itself.

Christopher Ainslie’s Oberon is cleanly sung but under-projected; Soraya Mafi’s vivid Tytania has the right imperiousness, and her wooing of Joshua Bloom’s splendidly-sung Bottom is wickedly suggestive. Eleanor Dennis’s spitfire Helena ensures that the weather in the parallel relationships of the young lovers – Clare Pressland, David Webb, and Matthew Durkan being the others – changes vigorously from calm to storm and back again. It takes some time before the Mechanicals catch fire, but when they do – in a brilliantly-directed play-within-a-play – their comic timing is perfect: Bloom, Graeme Danby, Simon Butteriss, Timothy Robinson, Robert Murray, and Jonathan Lemalu all emerge as farceurs to the manner born.

Alexander Soddy conducts with a fine sensitivity to Britten’s effects; this opera represented his most magical blend of voices and instruments, and its Balinese echoes are rendered here with persuasive delicacy.