Just have faith in our love, says Elsa’s white knight after his arrival in a boat pulled by a swan, making it a condition of matrimony that she should never ask his name. She does, of course, and loses him for ever, thus aligning herself with Psyche and all the other heroines of mythological antiquity who can’t resist their own Edenic curiosity. Lohengrin – best-known through its Bridal Chorus which the Victorians appropriated, and which Anglican weddings are still powered by – is full of Wagner’s eccentrically homespun notions about sexual love, but it’s based on German magical folklore, and pits paganism and Christianity against each other, weaving their strife – which Christianity narrowly wins – into a story of German national resurgence. 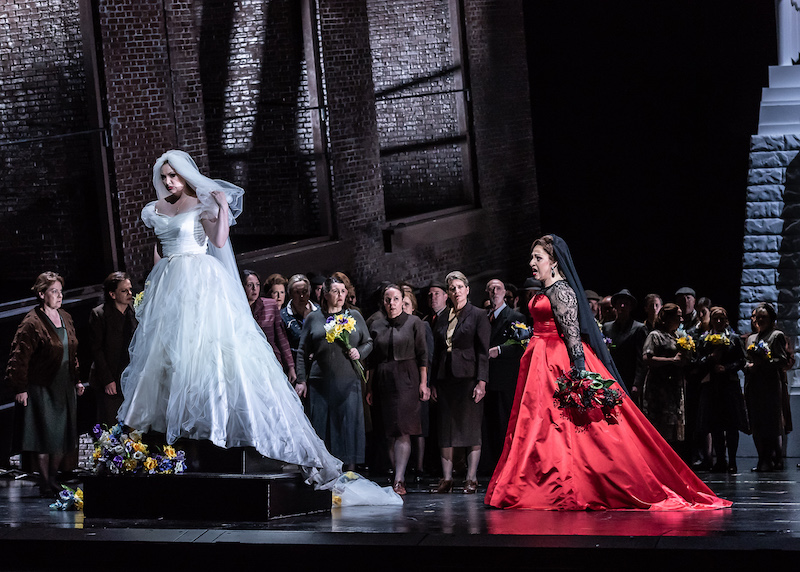 Wagner sets that story in tenth century Brabant, but David Alden’s new production is shot through with twentieth-century overtones, some of which work well, others less so. The curtain goes up on a city at war, with huddled citizenry and ruined buildings at crazy angles like those in the Vienna of The Third Man; the costumes mix Forties modernity with picture-book medievalism. But as the work progresses a Nazi subtext becomes obvious, notably in the upraised-arm salutes and in the medieval storm-troopers under their forest of triumphal banners, whose swan-motifs evoke the swastika processions Leni Riefenstahl filmed in 1936. The eventual collapse of those banners is clearly meant to reflect the purged new era in which Elsa’s lost-lost son will rule, but one can’t help feeling we’ve been taken on the wild-swan equivalent of an ideological wild-goose chase.

Clunky projections indicate the arrival of the mystical swan, and Elsa’s wedding dress floats down from the heavens like a reminder of opera’s eighteenth-century conventions, but Paul Steinberg’s designs are for the most part boldly inventive, while Adam Silverman’s lighting powerfully amplifies the drama. I have never seen a stage so inkily black as that on which the monstrous Ortrud (Christine Goerke) binds her confederate Telramund (Thomas J Mayer) to her will, in a marriage whose rutting sensuality has been bred in hell. And thanks to the young Irish soprano Jennifer Davis we get an Elsa whose light, pure tone contrasts poignantly with soprano Goerke’s darker and deeper sound. Meanwhile the German tenor Klaus Florian Vogt – like a faded pop star in the inevitable white suit – conjures up his vision of the Grail with an engaging ingenuousness in his falsetto-free upper register.

Indeed the whole production turns on this dark-light opposition, with the chorus generating massive power in its moments of fear and exultation, the trumpet fanfares creating sound-surround from the boxes on either side, and the orchestra under Andris Nelsons’s direction honouring the sheer magnificence of the score.