On paper The Skating Rink had a lot going for it. A distinguished cast, and in Stewart Laing an experienced director-designer. A composer, David Sawer, who is a dab hand at creating atmosphere. A whodunnit plot based on a magic-realist novel by the Chilean writer Roberto Bolano. A stage on whose synthetic surface a skater could describe figures-of-eight, while those singing around her could walk on the ‘ice’ as if it were dry land.

We are in a hick town on the Costa Brava in the early Nineties. A champion skater is dropped from her Olympic team; a civil servant who is obsessed with her embezzles funds to create a secret rink on which she can go on training; a young Mexican poet falls in love with a homeless woman while working as a night watchman at a campsite; his boss is mad about the skater; the resident drunk is mad about an opera singer who has seen better days… There is a murder.

As conducted by Garry Walker, Sawer’s score is a beguiling patchwork of colours and effects employing everything from brass bands to a celesta and Chile’s answer to the ukulele; there are echoes of Bartok and Stravinsky. But the melodic lines superimposed on this sonic backdrop come in a forgettable brand of standard-issue semi-atonalism. More seriously, something is badly wrong that we should actually feel relief when the drama stops, and we are allowed to savour the skater’s solo grace. 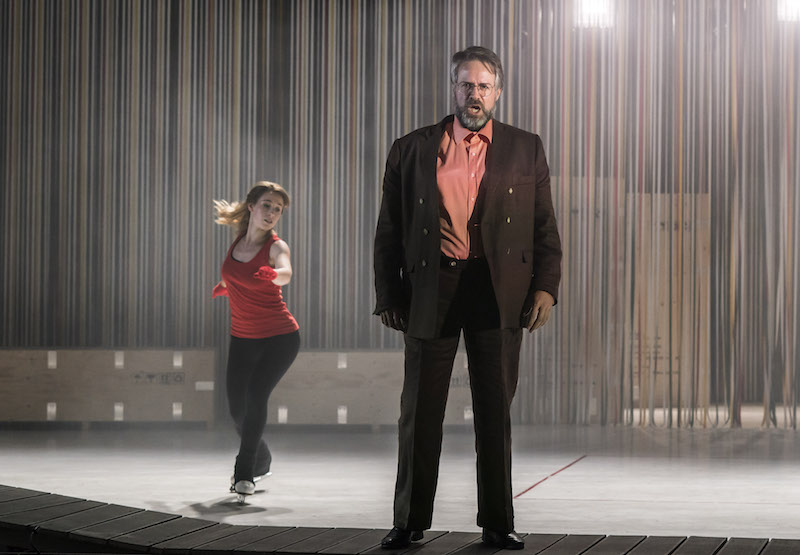 The problem is fourfold: the woodenness of the direction, the thinness of the plot, the crudeness of the characterisation, and the sheer banality of Rory Mullarkey’s libretto, which would make the script of the average TV soap sound like Shakespeare. ‘I’ve got the social services breathing down my neck’ doesn’t exactly cry out to be sung, any more than does this pearl from the civil servant: ‘Let me say this. I’m not a monster, I am a socialist. I believe in people.’ While the score looks in vain for a libretto to give it drive and drama, the sub-plots vainly search for a main plot.

All one can do is commend the heroic efforts of the cast to surmount these problems, so a big hand for Ben Edquist, Sam Furness, Susan Bickley, Claire Wild, Alan Oke, Grant Doyle, Lauren Zolezzi, and Louise Winter. They sing and act superbly, and deserve a vehicle which doesn’t fall so woefully far below its own ambitions.