Nobody ever complains when Ko-Ko’s ‘little list’ in The Mikado is updated to suit the temper of the times, and nobody complains that April de Angelis’s book for ENO’s Merry Widow goes big on the parallels between the mythical state of Pontevedro and Britain today. A once-great nation which has gone bust, and with which no other government wants to deal: as delivered with ‘Yes Minister’ lethality by the adviser to Andrew Shore’s Baron Zeta – the Pontevedrin ambassador to Paris – this topical barb brings the house down. 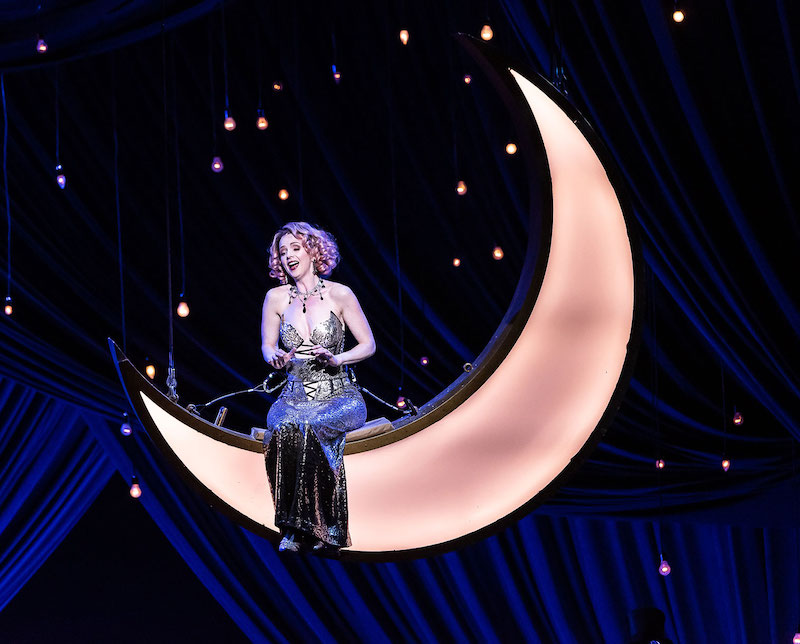 With lyrics by Richard Thomas, the whole of the libretto is in demotic English: here the dancing grisettes pass on the clap. More significantly, its Hanna Glawari – the rich and widowed former servant-girl whom a Pontevedrin must marry to secure her fortune, and thus save the state – is an Eliza Doolittle figure, incarnated by Sarah Tynan with a sarf London tone. The librettists have democratised and feminised the piece, though it was actually pretty feminist when Lehar and his librettists wrote it in 1905.

The one song which egregiously isn’t – when the menfolk hold forth on the duplicity of women – is here presented in a communal piss in the gents’ urinals, each singer producing his own fountain from behind his stall, and the Coliseum audience simply can’t get enough of it.

But the essence of this much-loved operetta lies in its elegance and grace, in its sophisticated and suggestive orchestration, and its immortal melodies. Who doesn’t melt, at least a little, when the ‘Merry Widow Waltz’ embarks on its tender course? Conductor Kristiina Poska is more alert to the nuances in the score than choreographer Lizzie Gee is, with her over-busy numbers for Hanna’s top-hatted suitors and the posse of scarlet-clad Hanna lookalikes who bump and grind. On the other hand the can-can at Maxim’s is a suitably enthusiastic riot, even if the male dancers in their leather nappies are more than a trifle fey.

But the piece is all about two things: adulterous deception by the ambassador’s wife Valencienne (Rhian Lois) with the French aristocrat Camille (Robert Murray), and true love (running a bumpy course) between Hanna and her childhood sweetheart the playboy Danilo (Nathan Gunn). With the evergreen Shore watching in impotent farceur mode, the deception unfolds brazenly in a broom cupboard and under a banqueting table, and is comically acted and beautifully sung. The love story takes a while to get going – we need to believe in it, and initially we don’t because the acting doesn’t allow us to. But when it does, and when Tynan’s singing at last takes off, the whole caboodle becomes airborne and floats away into a starry night.