A show with many progenitors will either flop or develop synergy, and it’s nice to report that A Man of Good Hope does the latter. Co-produced by the Royal Opera, Répons Foundation, BAM, and Les Théâtres de la Ville de Luxembourg, and with Comic Relief funding the Isango Ensemble who perform it, this production premiered in Cape Town, was adapted for staging at the Young Vic, and has now made its landfall at the Linbury. 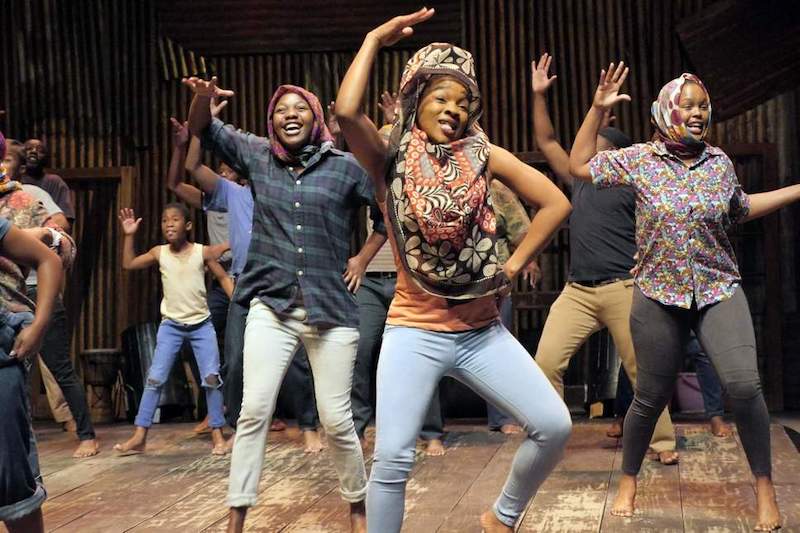 It’s based on a book about a refugee’s true story as he progresses through Africa after setting off from Mogadishu, and it presents that book’s author, Jonny Steinberg, in fictionalised form as he faces the people he has himself fictionalised. We first meet the protagonist as a young boy, whose odyssey begins after he sees his mother arbitrarily shot. The catalogue of casual cruelties he then endures leads him to develop a streetwise cunning, and although his dream is of emigration to America he winds up on the outskirts of Johannesburg, in a township of a kind which the Isango performers themselves hail from. There are moments when the libretto addresses domestic issues for a domestic South African audience, but it’s essentially a tale of pathos and anger, courage and despair, finally winding up in a spirit of battered, philosophical triumph.

Mark Dornford-May’s directorial style comes out of the Peter Brook tradition, with minimal props and maximum use of the imagination – lips and tongues do for ringing telephones, four tyres equal a lorry. Under the musical direction of Mandisi Dyantyis and Paulina Malefane, six big marimbas plus a constant backdrop of vocal harmony speed the action along so fast that these versatile singer-dancers’ feet scarcely seem to touch the ground. The singing has that warmly piercing vibrancy which is only to be found in the townships of South Africa.

Everyone on stage has their own character, and all carry conviction, but one figure stands out from start to finish: Siphosethu Hintsho, voice as yet unbroken, but bright as a button and already an all-round star, whether singing, dancing, or clowning.