Beating a path through the back streets of Tower Hamlets, I find myself at a stunningly good chamber concert. It begins with Tamsin Waley-Cohen and the Albion Quartet giving the most vivid and passionate account I have ever heard of Mozart’s Prussian Quartet, after which Waley-Cohen and pianist Samson Tsoy play Ravel’s idiosyncratic Sonata for Violin and Piano. Finally, pianist and string players join forces for the magnificent G minor Piano Quintet which Shostakovich composed, and premiered, during the darkest days of the Second World War. They bring a molten intensity to its opening movement, luminous transparency to the Fugue, and they invest the chromatically-sliding leitmotif of the Intermezzo with a haunting ominousness. 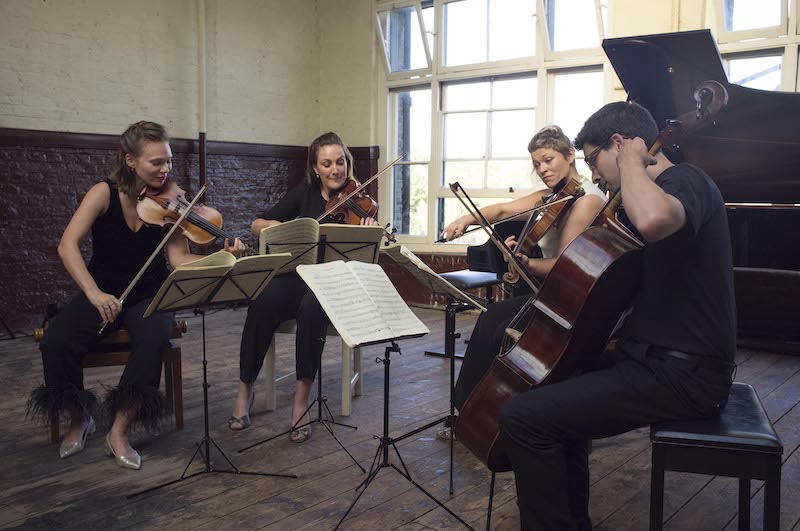 The Albion Quartet at the Ragged Music Festival

Yamaha have contributed their concert-grand gratis, while the musicians have reduced their fee, because this charity event is designed to raise awareness about the building in which we are sitting, and funds for its proper renovation. The room may have an ideal chamber acoustic, but what it actually is – and what every Spartan inch of it proclaims – is a Victorian classroom. This is the Copperfield Road Ragged School, converted by Dr Barnardo from three canal warehouses in 1877, and unchanged in almost every detail since.

It survived the Blitz, was saved from demolition by a listed-status order, and for the past thirty years has functioned – run on a shoestring – as the Ragged School Museum where school groups from all over Tower Hamlets and beyond learn about the struggle for free universal education, and about the part in that struggle played by the ragged school movement. These places were where destitute children were schooled – and, more importantly, fed – thanks to Barnardo and the other enlightened campaigners who followed Charles Dickens’s lead.

As a museum it takes my breath away, because I am old enough to remember a not very different classroom in North Wales in the 1940s. But as its director Erica Davies explains, the plan now is to turn this potentially superb building into a performance centre for a borough which is at present a desert for music. Directed by Pavel Kolesnikov and Samson Tsoy, this new festival surely has a bright future, but if the National Lottery Heritage Fund decides to support the excellent refurbishment project now being planned, that future will be a hundred times brighter.