Daniel Barenboim’s West-Eastern Divan Orchestra (WEDO), created in 1999, is by no means the only youth orchestra to have emerged from the cauldron of the Middle East. Four years later in Ramallah, the Edward Said National Conservatory of Music launched the Palestinian Youth Orchestra, with a political agenda very different from that of WEDO. Barenboim and his co-founder Edward Said designed WEDO to ‘promote understanding’ between Israelis and Palestinians, whereas the PYO has a much more combative remit. Its founder Suhail Khoury hopes it will help forge a new Palestinian identity by becoming a cultural rallying-point for Palestinians in the West Bank and Gaza, and for diaspora Palestinians in other Arab countries whom he believes the Israeli army of occupation is systematically excluding from their homeland.

Each summer the PYO meets for an intensive week’s training followed by a tour, which has currently brought them to Britain for the first time. And while admitting that the PYO doesn’t have the polish of WEDO (all fledgling professionals), the PYO’s British conductor Sian Edwards speaks glowingly of the exponential rate at which their playing has improved over the last ten years. Most of her 85 players are from educated professional backgrounds, but some are self-taught and others have been taught via video; a handful of young, British-based, instrumentalists are helping the less experienced players keep up.

Support in kind has come in many ways, Edwards says. There being no euphonium in the Palestinian territories, the orchestra borrowed one, together with its player, as it did a celeste plus its player. Since they couldn’t afford to bring cellos and double-basses by air – each would have required an additional seat – British friends have lent instruments. Edwards talks wearily of the Israeli border controls: two young Gazans who should have been on the tour were denied travel permission at the last minute, with no reasons given. ‘The Israelis simply regard us as a nuisance,’ she says. 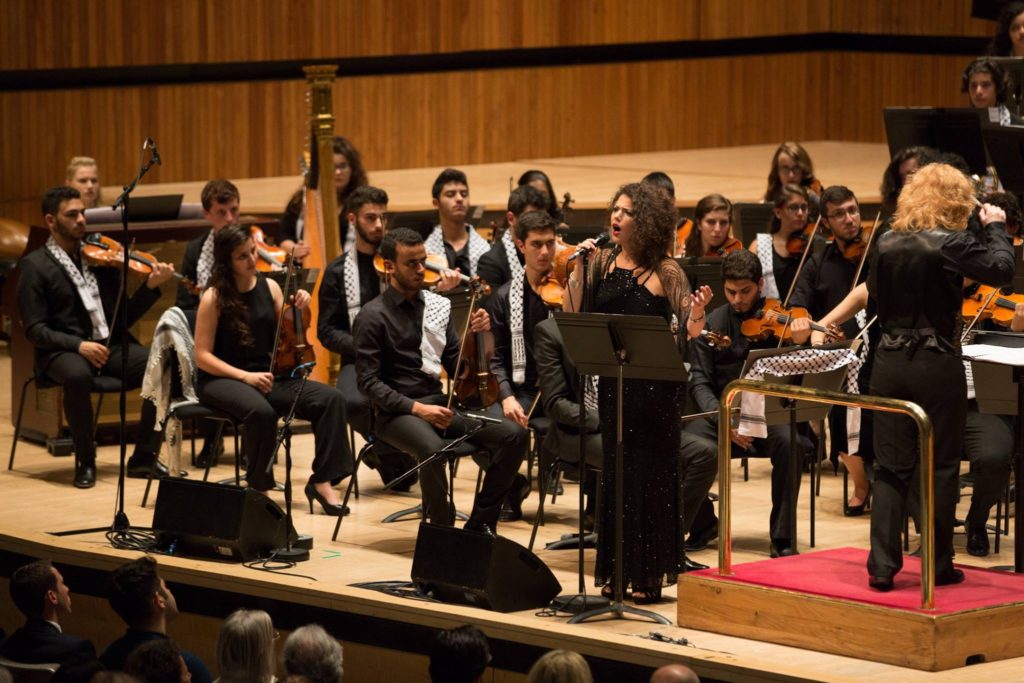 The programme with which the PYO is touring begins with Beethoven’s Leonore No 3 overture, and ends with orchestral arrangements of two Arabic songs sung by a young Palestinian named Nai Barghouti. ‘Nai’ is the Arabic for flute, and Nai did indeed begin her musical career as a seven-year-old flautist, but as a singer she burns with patriotic zeal for her native land.

Meanwhile the first six improbable years (2008-2014) of the National Youth Orchestra of Iraq are chronicled in a new book by its Scottish conductor Paul MacAlindin (Upbeat: the story of the National Youth Orchestra of Iraq, Sandstone Press). They raised money from scratch, and toured through Europe. Although they never managed to perform in Baghdad, and although the rise of Islamic State finally brought their progress to a halt, this is a tale of extraordinary resourcefulness and courage.

Since MacAlindin’s musicians were divided along ethnic lines – Kurds and Arabs have very different approaches to both music and life – the orchestra has been a metaphor for the ethnically-riven Iraqi state, and MacAlindin’s role as moderator seems to have been as much social as musical. His book contains many moving testimonies from individual players, for whom braving the difficulties of joining the orchestra was, as he puts it, ‘like using hell as a springboard to get to heaven’. His Baghdadi players were used to stepping over dead bodies to get to school, and to hiding from public view their battered and patched instruments (for many Iraqis, making music is haram, forbidden, a rule contravened at one’s peril). MacAlindin’s young musicians are all heroes, and so is he.