Everyone knows the overture to Marc-Antoine Charpentier’s Te Deum, though few have heard of that seventeenth-century French composer. After being pressed into service in the Fifties as the Eurovision signature tune, it got into the European bloodstream as the go-to trumpet-and-drum fanfare for all triumphal occasions.

Charpentier himself benefited from nationalist politics. Louis XIV’s composer of choice was the Italian-born Jean-Baptiste Lully, but Pierre Perrin, founder of the Académie Royale de la Musique, declared that it was ‘unseemly that a nation otherwise invincible should be ruled by foreigners in the fine arts, poetry and music’, and many agreed with him. This groundswell of opinion helped Charpentier land the job of master of music at the most prestigious Jesuit church in Paris. 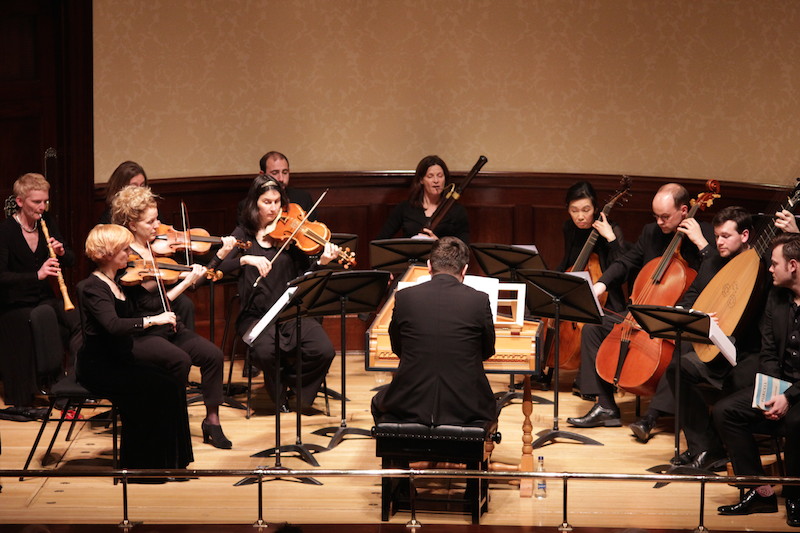 Orchestra of the Early Opera Company

Christian Curnyn and his Early Opera Company presented festive works from his choral oeuvre in a way which made one wonder why it’s so seldom heard: the oratorio In nativitatem Domini canticum, the Messe de minuit pour Noel, and the Te Deum. The recorder-led sound had a lovely freshness, with bassoon, bass violin and theorbo supplying the grounding. Gut strings permitted a blending of timbre impossible on modern instruments, and Charpentier’s choral style, with the voices melding rather than contrasting, reinforced that blend.

And so it was with the singers, who stepped out of the chorus for brief solos, then back into it so that the stream of music could flow serenely on. And serene was the word for the Mass: there was no Teutonic descent into terror, even at the point of crucifixion. As usual with this excellent ensemble, there was no weak link among the soloists, with Samuel Boden, a tenor singing in the high haute-contre register, producing a positively oboe-like sound. There were twenty performers crammed onto the Wigmore’s little stage; the musical tapestry they created was joyous and seamless.

Over the past few years some remarkable young pianists have emerged from the former Soviet Union, and although Daniil Trifonov is not the best, he is the one the media have chosen to lionise. When he carried off the Tchaikovsky Gold Medal at twenty and followed it up with a flawless Chopin Cd, it seemed he could do no wrong. But that was six years ago, and in the intervening time he seems to have been pushed by his marketing team too hard for his own good. There’s no question about his technical prowess, but his musical judgment has been at times erratic.

His new Wigmore programme sounded intriguing: variations on – or pastiches of – Chopin pieces by Mompou, Schumann, Grieg, Samuel Barber, Tchaikovsky, and Rachmaninov, followed in the second half by Chopin’s second piano sonata. And since most of the works are seldom performed, the programme certainly had freshness. Mompou’s variations on Chopin’s seventh Prelude seemed to wear a wide grin as they progressively subverted the poise of the original, and they took off into realms of virtuosity which that Spanish composer normally never inhabits. Grieg’s little hommage was deft and brilliant, Barber’s Nocturne was disguised as a homage to Chopin’s precursor John Field, and Tchaikovsky’s Un poco di Chopin was a charming jeu d’esprit.

Rachmaninov’s Variations on a Theme of Chopin Opus 22 was designed to be the centre of gravity of this group of pieces, and it started promisingly, purveying all the effects which Rachmaninov had made his own, and which would make his Corelli Variations – which he composed thirty years later – such a wondrous experience. But this early piece got lost in its own virtuosity: I lost count of the number of times it seemed on the verge of finishing, only to be jerked back into garrulous life. It was like listening to a compulsive speaker who can’t bear to stop. ‘And another thing… and another thing…’

The Chopin sonata itself was a thudding let-down. The first two movements had some original touches, but were despatched with brisk impatience, while the funeral march was a caricature – almost unrelieved fortissimo for the main theme, the second theme going at a glacial pace; the finale, which should feel ghostly, had no trace of mystery whatsoever.

We’ve had loads of Monteverdi during his centenary year, but for those who can never get too much of his music, William Christie and his Paris-based ensemble Les Arts Florissants provided a brilliant evening. Their programme consisted of pieces drawn from his final work, Selva morale e spirituale, which translates as ‘Moral and spiritual forest’, that being a very suitable title for this capacious anthology of hymns, psalms, motets, sacred madrigals, and solo songs.

Composed while Monteverdi was choirmaster at St Mark’s in Venice, these works are astonishingly varied and reflect his supreme artistry in both luxuriously-extended and fiercely-condensed forms. His full-dress ‘Gloria’ is an example of the former; his two-minute madrigal ‘E questa vita un lampo’ – ‘This life is a flash of lightning’ – is a perfect example of the latter, expressing huge philosophical ideas in a nutshell: its first two lines go like the wind, then it broadens out in an expansive largo, before expiring in an explosion of busy counterpoint.

With eight singers, seven instrumentalists, and himself swivelling on his stool to accompany on both organ and harpsichord, Christie presented this refined amalgam of music and poetry in all its sophisticated emotional ambivalence. ‘Today we laugh and tomorrow we shall weep’ – with its images of beauty, decay, and corruption – was sung with alternating levity and sobriety; as Alexandra Coghlan observed in her elegant programme essay, in this music ‘certainty almost always turns to doubt’. Arianna’s lament in its solo Madonna form moved between frantic desperation and despairing resignation in soprano Lucia Martin-Carton’s performance; Monteverdi’s instruction ‘recitar cantando’ – ‘speak through singing’ – was faithfully followed in soprano Emmanuelle de Negri’s delivery of the ‘Confitebor terzo’. The male singers achieved their rapid ornamented runs with a relaxed accuracy devoid of any preciousness. In technical terms, this was a very classy act.