‘Masterpiece’ – like ‘great’, ‘iconic’, and ‘legendary’ – is a word which should be used sparingly by critics, if at all. But it is absolutely the right word for the Phelim McDermott/Julian Crouch/Improbable production of Philip Glass’s Satyagraha. This is currently packing out the Coliseum on its third revival, and I am as lost in admiration as I was the first time round. Lost is indeed the word, because there are scenes which are still to me inscrutable, if in a tantalisingly pleasurable way. I love the music, with its ear-charming repetitions, but that’s only a component: the real magic lies in this inspired marriage of sight and sound. 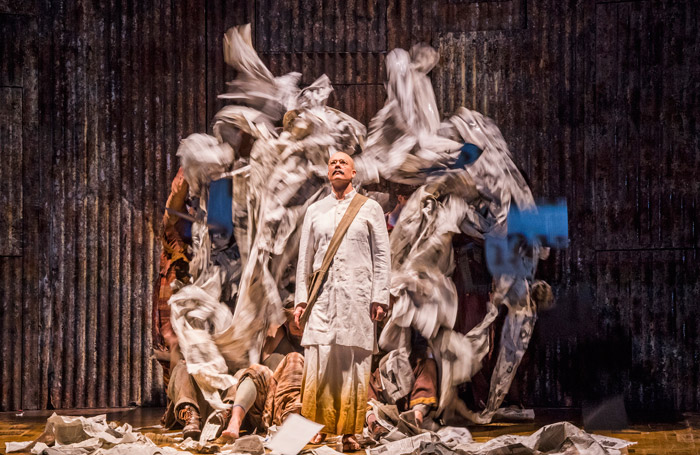 ‘Operas aren’t history, they’re poetry,’ says Glass. ‘They don’t have to tell the truth.’ In a nutshell the plot follows Mahatma Gandhi’s early years with his non-violent Satyagrahis in South Africa, and his ‘spiritual guardians’ colour each of the acts: Leo Tolstoy who inspired him, Rabindranath Tagore who counselled him, and Martin Luther King Jr, who carried on the torch of peaceful mass-resistance after he had died. Not much ‘happens’, but it’s all played out with such sacramental seriousness, and on a kaleidoscopically-changing backdrop, that we are held riveted. Improbable’s ‘skills ensemble’ creates cows, crocodiles, jousting giants and Hindu gods with somnambulistic purpose and precision, yet it’s all done with pea-sticks, papier-mache, Scotch tape, and painterly lighting. The final scene, in which Gandhi becomes John the Baptist to King’s apotheosis in a plinth, is spellbindingly beautiful.

The piece is nobly served by its new cast. While conductor Karen Kamensek keeps the pulse lovingly regular, the chorus transforms itself with burning conviction; soprano Charlotte Beamont, as Gandhi’s secretary, maintains her stratospheric vocal line with tight-rope precision. And in Toby Spence we get the perfect Gandhi: now completely recovered after his battle with throat cancer, he has also recovered the transparent purity of his youthful tenor voice.