While Richard Eyre’s ironclad Traviata draws the crowd year in year out at Covent Garden, English National Opera repeatedly tries and fails to come up with a decent production, following Peter Konwitschny’s misguided shot in 2014 with Daniel Kramer’s calamitous one two months ago. So the bar for a new London Traviata is set low. 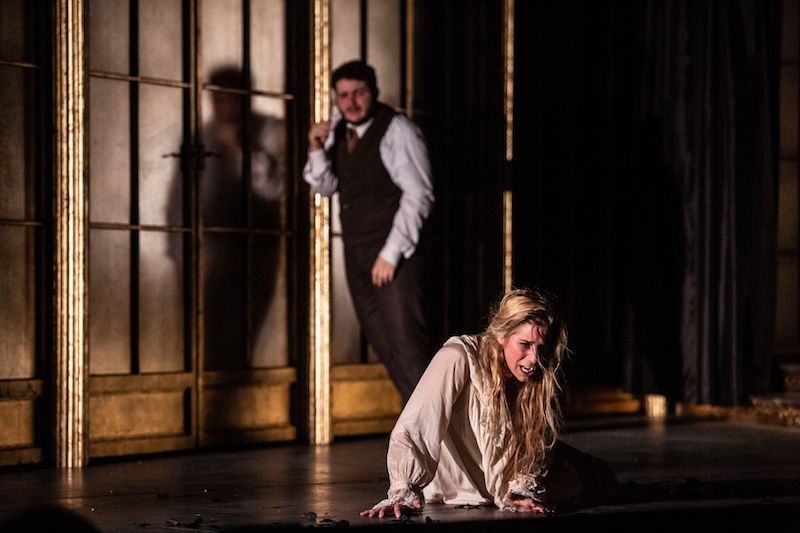 It’s nice to report that Rodula Gaitanou’s new production for Opera Holland Park sails over that bar with ease – and indeed, that OHP itself has raised its game. The theatre feels more solid than heretofore, and its auditorium more like an enclosed one, with a better acoustic; peacock calls still mingle with the arias, but sounds from the outside world no longer penetrate as they used to.

Cordelia Chisholm’s all-purpose set is a cross between a gilded hall of mirrors and an orangery with an extension; rearranging a few chairs and adding or removing a plant or two is enough to conjure up salon, rural retreat, or bedroom. A sepulchral recording of Violetta’s laboured breathing precedes the opening bars of the overture, and in our first sight of her during the overture she is being helped like an invalid into her party frock: since Verdi’s score constitutes a flash forward to the tragic denouement, it’s appropriate that the mimed drama should too. And when the lights go up, Violetta’s opening party turns out to be a decorous affair; the restraint of Gaitanou’s direction, allowing the focus to stay on the principals, proves one of the production’s strengths.

And with Lauren Fagan as Violetta and Matteo Desole as Alfredo, the central casting is impeccable. We believe in this relationship dramatically, and the vocal match is ideal. Desole’s ultra-smooth and sweet bel canto cuts effortlessly through the orchestra, while the easy grace of Fagan’s coloratura, the warmth and richness of her sound, and her delicately floated high notes, all make this Violetta a delight. Dying, she’s still a party girl.

Stephen Gadd’s Germont is initially a stiff and straight-backed creation, but his duel with Violetta has a convincing momentum as he circles persuasively round his agonised victim. The subsequent father-son battle is a bit contrived, but it may settle as the show beds in. On the other hand, Flora’s party goes like the wind, with its gypsy women straight out of a Toulouse-Lautrec poster, and powered by top-notch orchestral playing under Matthew Kofi Waldren’s direction.

The direction of the final act is flawless, as the mood flickers between nostalgia, despair, and crazy hope. This Violetta’s singing cries to the heavens, as she wrestles with her soul before making her stumbling and hesitant advance into that super-bright sunlight which denotes the end of life.