One by one the country house opera companies are getting into gear. Now it’s the Grange Festival – not to be confused with Grange Park Opera, of whose neo-classical pile it became the occupant last year, after a moment of dramatically-acrimonious fission – kicking off with a new production of Handel’s Agrippina.

The characters of this early masterpiece are also those of Monteverdi’s L’incoronazione di Poppea, but the treatment could not be more different. Handel’s opera is a satirical comedy, all of whose characters – apart from the decent, put-upon Ottone – are exposed as venal, self-seeking, and lecherous. Agrippina’s ambition to install her son Nerone as emperor of Rome is triggered by the rumour that her husband Claudius has been drowned at sea; Poppea is more than willing to be used as sexual bait in Agrippina’s complicated scheme to discredit Ottone, whom Claudius wants to install in his place as recompense for saving his life; unscrupulous Nerone eagerly falls in with his mother’s plans… but the plot is infinitely more convoluted than this little summary. 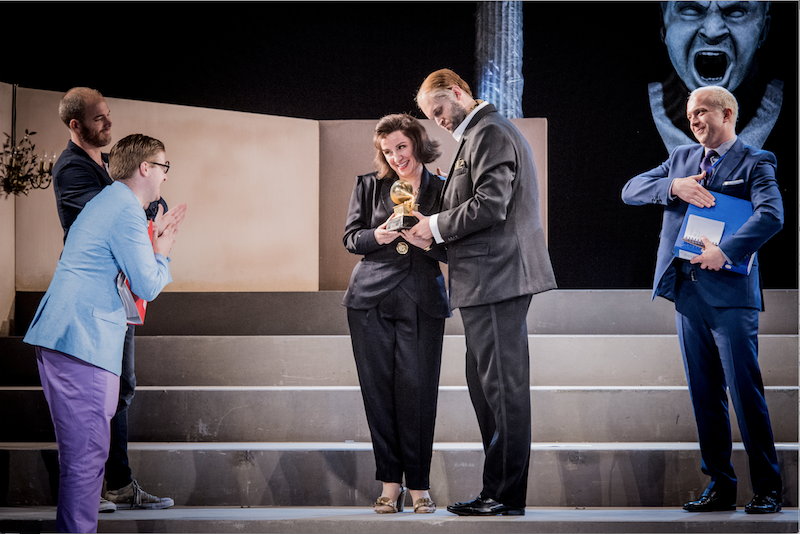 Walter Sutcliffe’s production trades in the thrills and spills, deceptions, seductions, and revelations, cutting out the recitatives so that the whole thing rushes along as if there’s no tomorrow. Jon Bausor’s circular set, on its much-used revolve, begins as a perfect simulacrum of the auditorium, and at those moments when the characters take their selfies – the time is now – or appeal to the audience for sympathy, we effectively become the citizens of Rome. The centrepiece at one point is a neat wooden model of the Grange itself – a piece of cosy self-reference in the Glyndebourne tradition.

And on the surface it’s all about sex. The compulsively rutting Nerone straddles a fallen Roman column to indicate the size of his erection, and checks on the French letters in his wallet before an attempt on Poppea; Claudius’s own attempt has him in pursuit with his trousers round his ankles; Ottone and Poppea take to the bottle in frustrated adolescent despair. But nobody gets killed, everyone lives happily ever after, so the bad behaviour really doesn’t matter.

Handel’s great achievement is to couch all this in a dazzling stream of arias which are themselves richly dramatic, and which are supported here by lovely playing from the Academy of Ancient Music under Robert Howarth’s direction. And there’s no weak link in the cast. Counter-tenor Christopher Ainslie’s softly-sung Ottone makes a fine foil to counter-tenor Rafaele Pe’s Nerone, whose timbre has an acidic edge; Ashley Riches’s sad old groper Claudius is a complex but believable creation, while Stephanie True’s kittenish Poppea makes up for her slightly under-powered singing with cleverly-judged moments of comedy. And in Anna Bonitatibus the title role is incarnated to perfection: manipulative, imperious, yet at the same time racked by doubt, this charismatic Italian mezzo dominates the production with massive vocal power.