Benjamin Britten’s War Requiem is all bells, children’s choirs, trumpet calls, choral shouts, solo voices leaping out like flames, and angular melodic lines over a ground-bass of lamentation: its rock-hewn contours have such clarity – especially when the performers are dispersed round the auditorium – that the experience is almost visual. Which is presumably why nobody in Britain has thought to give it a full theatrical staging – until now. 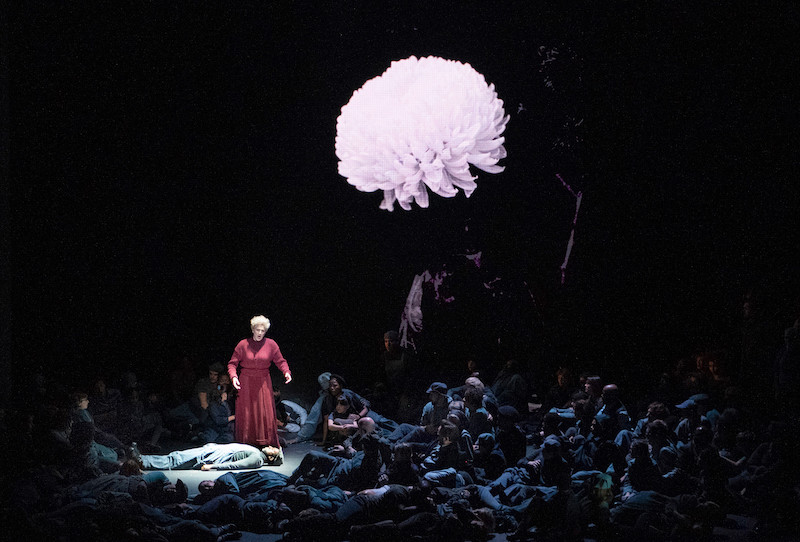 Following the Latin Mass for the Dead interspersed with Wilfrid Owen’s ashen poems, this is a tale of suffering and the struggle to understand the reason for it, so there’s no ready-made plot to hang a staging on. For English National Opera, director Daniel Kramer has invited the German-born photographer Wolfgang Tillmans and the choreographer Ann Yee to give the oratorio visual form. And from the moment the stage is filled with huddled masses under a dark sky – refugees from any and every conflict – it was clear they had found a language which could work.

Apart from the soprano, tenor, and baritone soloists, all the figures on stage were chorus, on this occasion magnificently amplified by the addition of the black chorus who had been shipped in for Porgy and Bess. Yee had the children’s chorus periodically doing what children do – play games – but also enacting a communal lament over the dead who thickly covered the stage. The adults moved like one organism, sometimes as prisoners circling their exercise-yard, sometimes limping along on a road to nowhere, and Yee’s choreography – which did admittedly become repetitive – was alert to the nuances of the score.

As were Tillmans’s slow-moving designs. At times he simply coloured the stage through lighting, or let an image burn into our consciousness – a giant white chrysanthemum beside a blasted tree, or a children’s snowball fight which came and went in ghostly silence – and for a lot of the time he left the stage completely blank. If only more stage designers would understand, as he does, that less can be more.

Moments of operatic cliché in the music were complemented by directorially-inserted messages – the children being marched off like little soldiers-in-the-making, or two boys in oversized trench coats squaring up to each other with knives – and sometimes those messages misfired. For example, a poster drawing attention to the Srebrenica massacre came and went, seeming arbitrary and gratuitous. (Well, Britten himself ducked out of the work’s moral challenge, by tethering it tamely to the 1914-18 war, rather than to the just one he had evaded by fleeing to America.) But these are minor quibbles. The current rise of nationalism, and the beginning of the end for the European Union as the greatest peace project ever created, loomed here as menacing subtexts.

Musically the whole event was superb, thanks to Martyn Brabbins’s super-sensitive conducting, to inspired singing by the chorus and by the Finchley Children’s Music Group, and to searing performances by tenor David Butt Philip, baritone Roderick Williams, and the incredible Emma Bell.

This show is now in repertory, running in parallel with another must-see at the Coliseum: David Alden’s production of Donizetti’s Lucia di Lammermoor, which knocks spots off the Covent Garden version.