The popularity of Engelbert Humperdinck’s Hansel und Gretel goes up and down like a yo-yo. After its premiere – conducted by Richard Strauss, who admired it enormously – it became a worldwide hit, and within 20 years had been translated into 20 languages. Then, in Britain at least, it fell into an oblivion from which ENO rescued it in 1987, followed by productions by Welsh National Opera, the Royal Opera, Glyndebourne, and Garsington.

Now comes another version from Covent Garden, under the direction and design of Antony McDonald whose brief – which he has gladly embraced – has been to make it a ‘children’s opera for Christmas’. Yet it really isn’t a children’s opera at all. For Freudians, it’s a rumination on primeval childhood fears of separation from parents, and fears of blindness and death. In the original Grimm Brothers’ version the impoverished and desperate mother plans to kill her offspring by leaving them to die in the forest, but Humperdinck’s gentler solution is to concentrate the evil in a witch who can be transformed into cake and eaten.

The Leiser-Caurier version for Covent Garden was darkly surreal. Laurent Pelly’s Glyndebourne production turned the story into a surprisingly convincing ecology lesson, with dirty plastic bags blowing through a forest of denuded trees and the children’s hunger made to symbolise the misery of the starving Third World.

During the overture in McDonald’s production we get a misty vision of a happy family stuffing themselves in their cosy chalet, before reality bites with bare shelves and the protagonists scuffling disconsolately. These children are big, sturdy figures with voices to match: Jennifer Davis brings a Wagnerian tone to Gretel, while Hanna Hipp has equal vocal weight as her brother; their mother, sung by Michaela Schuster (who was last seen as Fricka in the Ring) is a massive presence; Eddie Wade makes a genially commanding father. The drama is gently convincing, though without much sense of hunger. 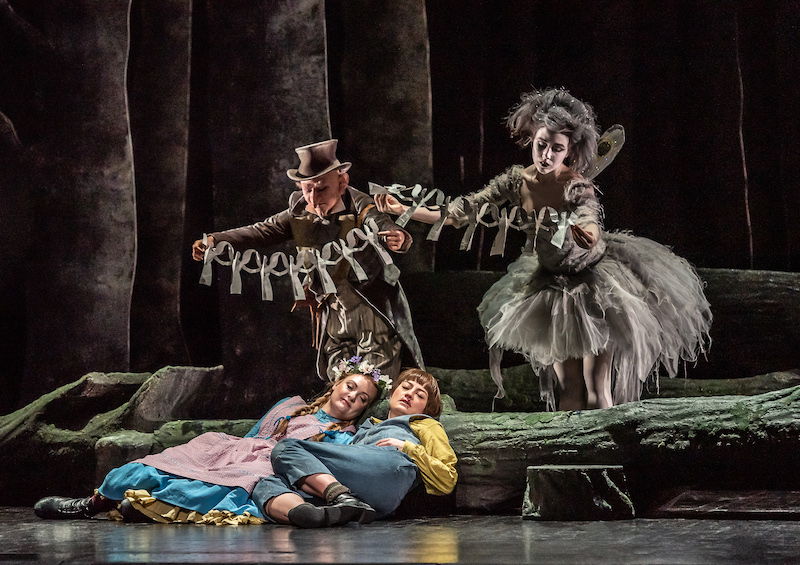 McDonald allows his imagination free rein for the act set in the forest, with magical results. Haegee Lee’s diminutive Sandman is an exquisite and oddly Dickensian creation, while the spirits of the forest incarnate Cinderella, Rapunzel, Rumpelstiltskin, and sundry other Grimm characters; Christina Gansch is a bewitching Dew Fairy. Costumes, choreography, and lighting are as ravishing as the music is under Sebastian Weigle’s sensitive direction.

But then McDonald blows it. His gingerbread house is modelled on the house in Hitchcock’s Psycho (no modern child will get that reference, and what purpose does it serve anyway?). Gerhard Siegel’s camp Witch is modelled on Wolfgang Ablinger-Sperrhacke’s unforgettable one in the Glyndebourne production, though with none of that singer’s bite and comedy. The furnace is laboriously conceived and devoid of menace; at no point does Hansel seem in danger, so his ‘rescue’ goes for nothing. The liberation of the Witch’s other child-victims falls flat because its meaning is not made clear.

Humperdinck’s fable has the force of myth, but you’d never guess it from this flaccid account. Opera must be powered by a story-telling intelligence; this show, which has little to interest the juvenile i-phone generation, isn’t.