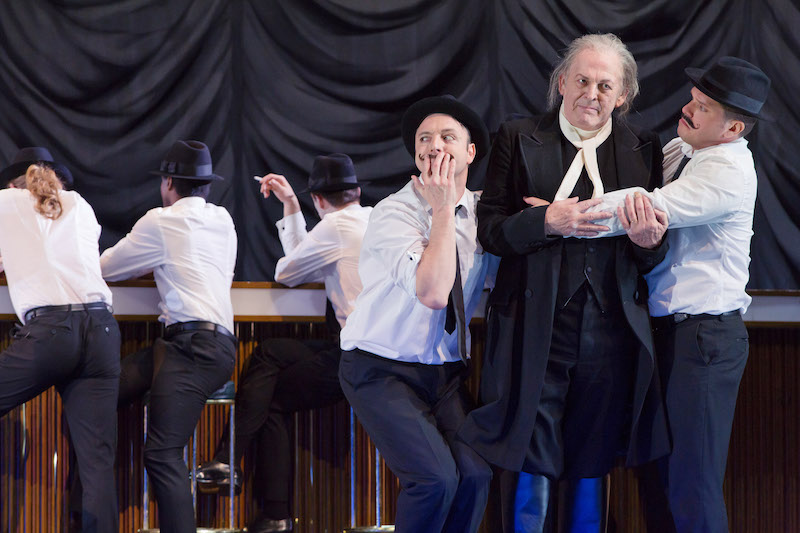 The German director Jan Philipp Gloger introduces his take on Cosi fan tutte, now in revival, with a barrage of ideas. A few of these are perceptive, but most are pretentious guff. It’s a nice conceit to describe each of the opera’s quartets as ‘a utopia made audible’, and it’s pertinent to point out that while Fiordiligi ends up loving two men, Dorabella ends up loving the whole world.

But Gloger gets hung up on some modish notions which simply can’t apply to this work. He wants to see it as an essay on ‘self-reinvention’, on ‘an exploration in which we go beyond ourselves by expanding our boundaries’; he sees the four protagonists as representing ‘four genders’, and he’s decided that his Fiordiligi and Dorabella shall see through their boyfriends’ disguises, thus acquiring ‘a greater degree of sovereignty and responsibility’, rather than being condemned to ‘a position of complete dependence’.

All very PC, but the fact is that Mozart and his librettist presented their men and women as equally victimised by circumstances. Moreover, the complex symmetries of the work – sexual, dramatic, and vocal – absolutely don’t need the finicky top-dressing Gloger imposes on them. He correctly sees the work as posing questions about the nature of love, but he refuses to let Mozart’s brilliantly ironical balance between words and music do its job. The whole of the first act is turned into an exercise in meta-theatre, where nobody believes the words they are singing, and where consequently neither do we.

The plot is broken down into a series of unrelated scenes: the soldiers’ departure takes place on a Brief Encounter station platform, the women meet the now-disguised men in a sleazy bar, and the painful/erotic couplings happen first onstage, then backstage. The protagonists are in modern dress, but Despina’s disguises are straight out of commedia dell’arte; Don Alfonso remains in 18th century garb throughout. One of Ben Baur’s designs is a delight, but for much of the time the visuals are shambolic.

The drama itself only works fitfully, and when it does it’s thanks to some outstanding singer-actors. Gyula Orendt’s Guglielmo is a powerfully-drawn character, while Paolo Fanale’s sweetly-sung Ferrando would charm the birds off the trees. Serena Gamberoni’s Despina plays strenuously to the gallery, but Serena Malfi’s Dorabella provides a gracefully silver-toned foil to Salome Jicia’s gloriously-sung Fiordiligi. Thomas Allen, who has long made the role of Don Alfonso his own, is of course the ideal MC.