The Diary of One Who Disappeared, Linbury Theatre, London

Janacek’s unrequited 11-year infatuation with Kamila Stösslova – 37 years younger and happily married – gave rise to two of his greatest operas, and to a song cycle which had its own strange genesis. Janacek happened to read some short poems collectively entitled From the Pen of a Self-taught Peasant and published anonymously in a Brno daily paper to which he himself was a contributor. 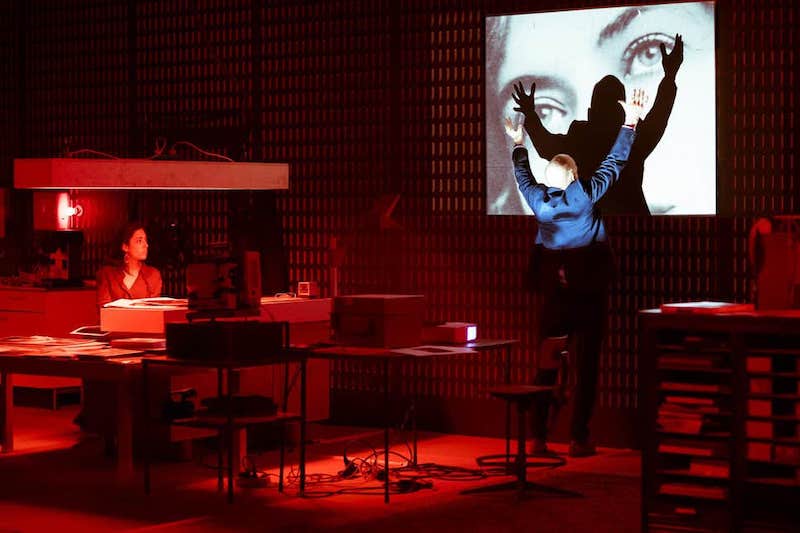 The Diary of One Who Disappeared ©Jan Versweyveld

The poems portray a farmer’s teenage son named Janicek who is torn between filial duty and his attraction to a Gypsy girl named Zefka. Guilt-ridden at betraying his clan – no liaisons with outcasts – he goes to meet her each night in the woods, and when he realises that she’s bearing his child he leaves home to live with her.

In his setting of the poems, Janacek had the protagonist sung by a tenor, and the Zefka-figure by a contralto; he also added three offstage women’s voices. Zefka is instructed in the score not to appear until the seventh song, and to leave during the eleventh; in place of the eighth song, a piano solo represents the couple’s love-making. Janacek was offering his own dramatization.

The Belgian director Ivo van Hove has taken his cue from this to develop the drama further, inviting the Flemish composer Annalies Van Parys to write five musical fragments ‘reflecting’ on the work. So here we are with tenor Ed Lyon, contralto Marie Hamard, and members of Muziektheater Transparent, in the beautiful little Linbury Theatre.

The lights go up on what looks like a cross between an office and a laboratory equipped with a grand piano and a film projector. Hamard comes on, makes coffee, drifts over to the piano and begins to pick out notes under the guidance of an unseen male voice. Another woman comes on and extracts some rippling Janacek-style sounds from the piano; a middle aged man appears, all washed up. Hamard sings of the sadness of ploughing without love, then we hear Lyon’s voice, urgent, eloquent, and at first disembodied, starting to tell his tale.

The production seems somewhat self-regarding as Lyon and the other man busy themselves with photographic matters and project a bold ‘Zefka’ on the wall, but as Janacek’s music works its spell the tale takes shape. Recollected not in tranquillity but with cruelly clinical hindsight, it transfers itself to the here-and-now, with Lyon and Hamard re-enacting their love-making trysts on stage. She is the powerful one, he the bewitched and tormented victim. Her voice is commanding, his has a piteous sweetness.

The fictional plot peters out, but the framing plot resolves itself with crushing force. The middle aged man is Janacek, replaying his life. He reads one of his love-letters to Kamila, burns it, then does the same with another: “This piece has been written in fire.” As the lights go down we leave him sitting in a corner, grief-stricken, incinerating the life he never managed to live.

It’s hard to discern the joins between Janacek’s songs and the interpolations by Van Parys, though there are moments when the offstage voices indulge in some very 21st– century discordant glissandi. Pianist Lada Valesova accompanies in fine style, the lighting is beautiful, the staging elegant. That said, it would still be good to hear the song-cycle in its original state.