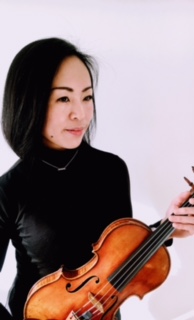 The three-string shamisen lute is a brashly assertive instrument, but Japanese composers and performers are now exploring its hitherto unsuspected sonic potential. Honjoh Hidejiro, the leader in this field, has commissioned solo works from composers including Dai Fujikura, the jazz pianist Vijay Iyer, and the ever-Protean Ryuichi Sakamoto. Honjoh’s artistry involves effects ranging from stroking the strings and massaging the tonality (through infinitesimal readjustments of the pegs), to creating chordal runs and shivery tremolos with the aid of the plectrum. He can create implied polyphony just as a Bach cello suite does, and he’ll sing along as well as play (incarnating Hamlet and Ophelia for a ferociously atmospheric setting of ‘To be, or not to be’), but he’s happiest dwelling in a Zen Buddhist aesthetic. His favourite Sakamoto piece is a meditation on bare intervals, feeling its way microtonally towards silence; for him it suggests ‘a blank white sheet of time, and a grey zone of abstract space’.

I learned all this at a lunchtime recital at the Wigmore Hall, for that is when the big halls can produce unexpected delights. This week I stumbled on an equally notable lunchtime event in the crush bar at the Royal Opera House. Covent Garden’s orchestra is one of its glories, and here three of its string high-flyers were doing the honours: Russian violinist Ania Safonova, Japanese violinist Kaoru Yamada (pictured), and the British violist Judith Busbridge. Their repertoire was refreshingly unfamiliar: Mozart’s Duo for Violin and Viola in G minor K423 and Prokofiev’s Sonata for Two Violins in C major Opus 56, a work which has – for him – a surprisingly lyrical grace. And the performances were superb. Brilliantly leading both works, Kaoru Yamada was the linchpin: with immaculate intonation, and a sound which ranged from luxurious warmth in the low register to chaste purity at the stratospheric top, she surmounted the technical challenges of the Prokofiev with relaxed persuasiveness. The ROH’s ‘Recitals at Lunch’ are not widely publicised, but as this one was sold out the word is clearly spreading – and so it should.