In the ancient past, four years ago, people going to the Last Prom had a fairly settled sense of how to deal with it. Left-wingers could laugh at the programme’s jingoism and refuse to stand for “Rule Britannia”, right-wingers could belt their hearts out, and foreigners could wave their national flags and join in the fun. It all worked because everyone felt reasonably OK about the United Kingdom, and about their place in it, or outside it. Now nobody knows where they stand, or where the UK is heading under its erratic ruler, so the Last Prom’s time-honoured sequence of imperial ditties represents a conundrum.

On the other hand, even before we get into the auditorium we’re left in no doubt where the audience itself would like to stand. The surrounding streets are like a fairground, with flags flaunting gold-stars-on-blue and berets to match being pressed on every passer-by; on the steps of the hall a youthful brass band plays sweetly, each member’s shirt emblazoned with the (NB Boris, truthful) slogan ‘Thank EU for the music’. 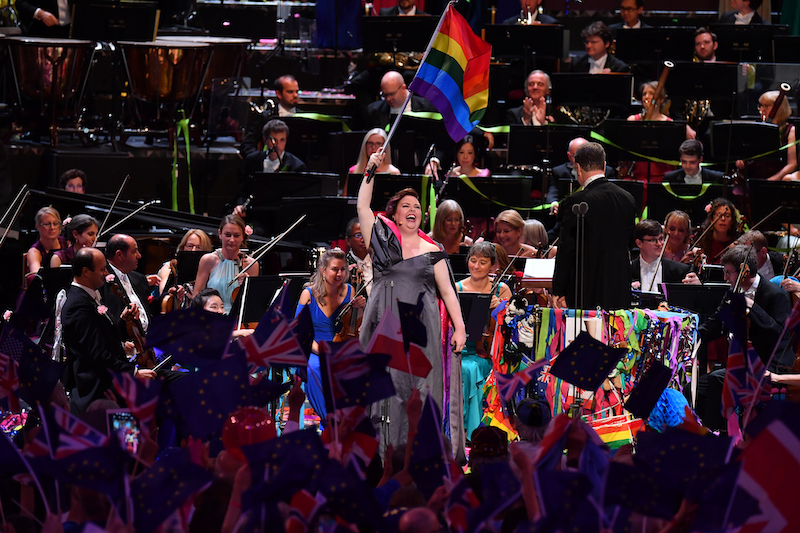 Since this is the year of Woke, and since the Proms programmers would rather die in a ditch than fail to box-tick a popular trend, the first work on the menu is entitled – surprise, surprise – Woke. Its composer Daniel Kidane says he wants to channel his optimism for the future through music, and the result is a brightly coloured tone-poem which the BBC Symphony Orchestra under Sakari Oramo’s genial direction turns into an agreeable aperitif for what is to come. Nicely played lollipops by de Falla, Elgar, and Elizabeth Maconchy follow, plus an off-the-wall effusion by Grainger and a terse but intriguing little choral work by Laura Mvula whose oblique dissonances are immaculately rendered by the BBC Singers.

Then it’s time for the occupant of the big slot to appear. This is where household names trade shamelessly on their stardom with a few choice operatic and showbiz numbers (think Bryn Terfel and Danielle de Niese), or where they make a bid to change the world (think Marin Alsop and her glass-ceiling-busting sisters). This time we get the American mezzo Jamie Barton, proudly championing bigness and bisexuality with the aid of her regal presence and magnificent voice.

She purveys mischief from “Carmen”, seductiveness from “Samson and Delilah”, tragedy and triumph from Verdi, before settling winsomely into “Over the Rainbow” and “I got Rhythm”, her bare shoulders encrusted with jewellery as though she’s a creature from the deep. Each time she comes back, it’s in a different garb, and when the whole hall erupts in EU flag-waving for “Rule Britannia” she unfurls and waves her own – bearing the colours of the LGBT movement – and acknowledges the ecstatic applause with a big fat smile.

Then it’s the home straight, culminating in “Pomp and Circumstance”, the National Anthem, and “Auld Lang Syne”. Looking down into the sea of EU berets in the arena – no trace of the Stupid Tendency here – one thinks for a moment that all will be well, and that the Brexit madness will subside. If only.