The most unforgettable stage debut I ever saw was on the evening of 11 September 2001. I was at the Coliseum, New York’s Twin Towers had just collapsed, and Manhattan was burning. On stage was a savagely stripped-down production of Gluck’s Orfeo: that drama chimed with the offstage one to invite us into a deathly Underworld, because we were all in a state of shock.

The Orpheus of the evening was a young mezzo we had not heard before, and her voice was oddly comforting in its disembodied purity: Alice Coote. And here she is 18 years on and now a major star, in the same role, and on the same stage. This time our indulgence is craved thanks to a chest infection she’s been suffering from, but it’s a while before she makes her first appearance.

For this production is both sung and danced. While the chorus are banished to the side-boxes, the three soloists – Orpheus, Eurydice (Sarah Tynan) and Amor (Soraya Mafi) – are to share the stage with dancers of the Wayne McGregor Company, with McGregor making his debut as director. 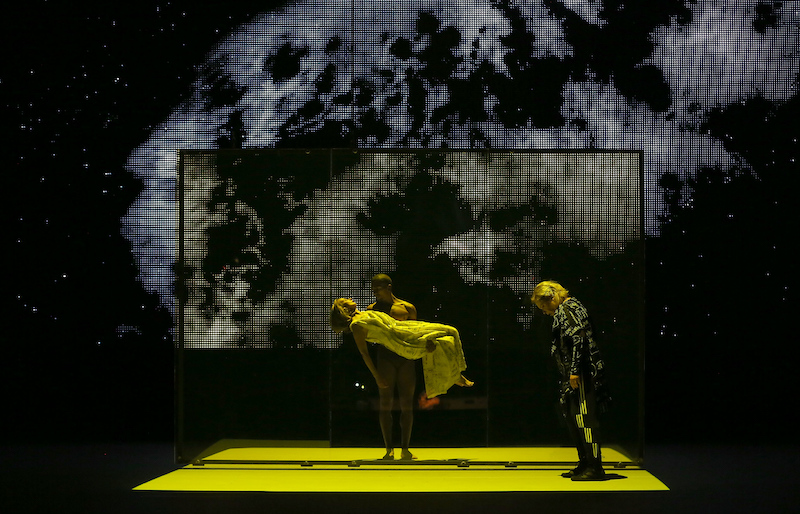 It has to be said that he gets off on the wrong foot: the opening scene is a fussy and incomprehensible choreographic episode which fatally undercuts the tragic grandeur of the music. When Coote does give voice it’s with her usual refined expressiveness, but everything in the production works against her, from the ugly thrift-shop sack she is condemned to wear to the intrusive presence of dancers who go showily through their leaps, lifts, and pirouettes, upstaging her drama with inscrutable mimed dramas of their own. Rather than growing organically out of the plot, McGregor’s reach-me-down choreography – of which in this show there are acres – just seems to have been imposed on it. The story of Orpheus may be a simple one, but McGregor still manages to obscure it; Lizzie Clachan’s monumentally dull sets merely compound the problem.

Yet musically this is a first-rate evening. While Coote triumphs over her infection, Sarah Tynan’s delicately-sung Eurydice and Soraya Mafi’s mercurial Amor create a lovely vocal triangle; Harry Bicket’s conducting honours Gluck’s glorious score, and the chorus sing heroically. One of the many things McGregor doesn’t understand is that this chorus is actually a character in the story: stuffing them away in the shadows, and replacing them with pointlessly hyperactive bodies, removes a vital dramatic dimension.

Time was when the Coliseum could give Covent Garden a good run for its money. ENO could never afford the big international stars, but with the aid of loyal front-rank directors and a seasoned ensemble of singer-actors it maintained a unique creative identity. All that has now gone. Erratic leadership and duff productions have reduced ENO to the status of an also-ran in Britain’s opera-house stakes, and this amateurish Orfeo won’t change that. Let’s hope things look up with the next instalment of its Orpheus project.