In a week when English National Opera presents a hyperactive Merry Widow, and the Royal Opera a deranged Cosi fan tutte, it’s sweet relief to get a Rossini performance from English Touring Opera which is restrained, beautifully sung, and doesn’t put a foot wrong all night. 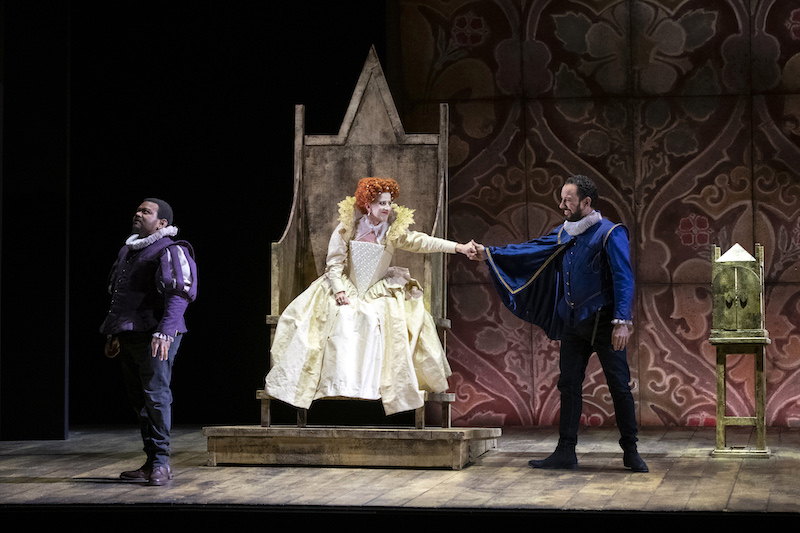 John Colyn-Gyeantey as Duke of Norfolk, Mary Plazas as Elisabetta and Luciano Botelho as Earl of Leicester
©Richard Hubert Smith

Few people will know Elisabetta, regina d’Inghilterra, but everyone will know the overture because – as a notice on the surtitle screen explains – it was first used for an even obscurer opera, and later revamped for Il barbiere di Siviglia: Rossini happily re-used good material. The plot is an apocryphal embroidery on history: Elizabeth is induced to condemn her favourite, Leicester, thanks to the insinuating lies of the jealous Norfolk; Leicester’s secret wife Matilda, a relation of Mary Queen of Scots, becomes a pawn in the game; when all is revealed, Elizabeth does the decent thing.

The characters are stereotyped, but their vocal interactions are not: the tormented duets and trios are full of agonised asides, and the solos give great scope for virtuosity. Things start inauspiciously with John Colyn Gyeantay’s first soliloquy as Norfolk – his wide vibrato completely obscures the notes – but when he settles his singing improves. Lucy Hall’s Matilda is nobly sung, Joseph Doody – as the courtier Guglielmo – has lovely control, and Mary Plazas as Elizabeth expresses the whole gamut of her character’s unhappy emotions. Luciano Botelho, as Leicester, successfully negotiates his high Cs, but what makes his singing remarkable is not his voice per se, but what it communicates.

The stage is bare except for a simple wooden throne; under James Conway’s direction, the chorus operates as in classical Greek drama, as a slowly moving frieze. The orchestra is expertly directed by John Andrews, with outstanding playing from the horns. Dramatically and musically a well-nigh perfect evening.